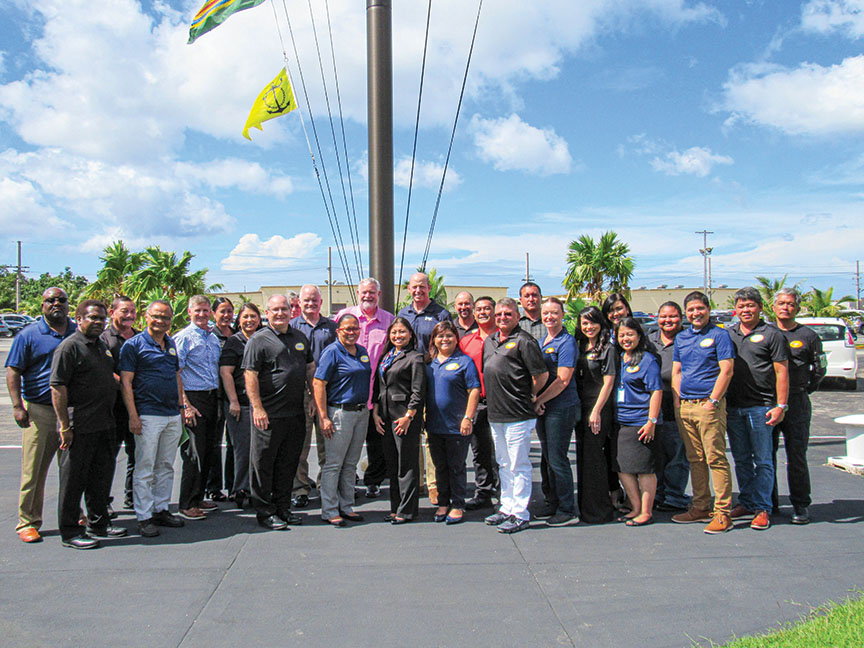 On July 1, 2005 DZSP LLC began its transition to the Guam Base Operations Support services contract, which enables the smooth running of Joint Region Marianas.

The busy years of its mission and service to the military’s facilities on Guam began as a joint venture between Day & Zimmerman (51%), SKE Support Services Inc. (24.5%), and Parsons Infrastructure & Technology (24.5%). DZSP was also able to offer employment to about 400 people.

The group not only secured one of the largest BOS contracts, but was also awarded the first potentially 10-year cost-plus awards (fee and contract terms) of a BOS contract in Guam.

In addition, the team aced its performance.

DZSP followed that with seven and a half years of Exceptional Award Fee scores, with an average grade of 96. DZSP 21 also earned all five Award Term Options for superior performance on its original contract. DZSP 21 has received 13 consecutive Exceptional CPARs where the Company was evaluated as Exceptional in every category: Quality of Service, Schedule, Cost Control, Management, Business Relations, Utilization of Small Business, and Regulatory Compliance.

DZSP’s first cost-plus BOS contract expired June 30, 2015, and it was awarded the follow-on BOS contract in September 2014. A dispute process followed, resulting in five bridging contracts with a sixth soon to be awarded.

Cornell, who is also project director for the contract, says, “2006 was our first full year with a workforce of approximately 420 employees. We finished 2019 with a workforce of over 1,000 employees including embedded subcontractors. Our growth is attributable to growth in the military mission in Guam and our exceptional performance.”

Cornell says DZSP is grateful to the companies that support it. “We owe much of our success to our embedded subcontractors such as Advance Management Inc., Cabras Marine Corp., CC Distributors, NAPA Auto Parts, and JTC Services Guam; our vendor partners (too many to list) who supply us with parts and materials; and our valued subcontractors (also too many to list) who provide superlative support for minor construction, primarily. As a matter of note, 88% of our vendors are small businesses and 85% of our vendors are in Guam.”

The close relationship DZSP has with its partners became very important when COVID-19 struck not only Guam, but a Navy carrier. “DZSP employees and valued subcontractors were exceptionally helpful in supporting the project work required to help get our USS Roosevelt sailors ‘back in the fight,’” Cornell says.

Since the beginning, DZSP has not only prioritized local employment, but has been an active member of Guam’s business community. “Some organizations of which we are members include the Chamber of Commerce, the Guam Contractors Association, and the Guam chapters of the Society of American Military Engineers and the Society for Human Resources Management,” he says.

The company is also a generous corporate citizen. Cornell says, “We have an ambitious community outreach program and support many causes on Guam such as the American Red Cross (the Red Ball), the American Heart Association, American Cancer Society (Relay for Life), USO, DPHSS Annual Christmas Gift Giving to foster children and more.”

Cornell says, “We plan to continue to provide exceptional services to the Navy for the next eight-plus years.”