In the current economic climate, companies on Guam and in the Northern Mariana Islands are proud to show their success and longevity in serving the people of our islands. Guam Business Magazine presents a handful of outstanding companies that are doing business in Micronesia celebrating important milestones in 2022. Through inspiration and dedication, each of them has managed to stay on course in a region that has seen more than its fair share of challenges for decades. 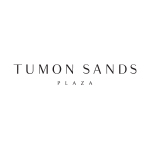 American Sotesu Corp. — the first owner of Tumon Sands Plaza — was established in March 1972 and began construction of the various phases of the Tumon Bay location that year.

Monte DM Mesa, general manager says, “Throughout 50 years, Tumon Sands Plaza has made many upgrades and renovations to its facility and operations.”

These included the addition of a south wing of 10,000 square feet to accommodate six additional boutiques.

“The success of Tumon Sands Plaza originated from its being one of the original luxury shopping centers in Guam,” Mesa says. “Through the years it has been the home of numerous luxury brands, specifically catering to Guam’s tourism market.”

In 2005 the Mills Group of Hawaii acquired Tumon Sands Plaza. Mesa says in the following decade, “The luxury goods market developed broader appeal which our tourists and local shoppers responded to.” Brands such as Balenciaga, Givenchy and Chloe took advantage of the opportunity to open doors.

In November 2012 S1082 SPE LLC acquired Tumon Sands Plaza in a change of ownership. Mesa and other management team members include Steve Streib as controller for TSP and Emmalou Cabrera as marketing manager.

Mesa says, “The Shopping Center continues to make important changes and adjustments — in order to remain relevant throughout all these years.”

In January 2017 TSP responded to the needs of its shoppers with the TSP Air Lounge for their flight and had time to spend came over to the lounge with their luggage and stored it.”

In addition, a free shuttle bus service proved very popular and will return as a post-pandemic offering. Mesa says, of the shuttle, “This captured the tourism market and differentiated Tumon Sands Plaza from other shopping centers in Guam.”

In 2018, in response to local demand and the growth of the restaurant sector, TSP welcomed national restaurants as tenants at the shopping center.

Mesa says, “The restaurants available at Tumon Sands Plaza, such as Chili’s Grill & Bar, Joinus Keyaki Restaurant and Olive Garden — in addition to the existing variety of luxury boutiques — built a larger target market for the shopping center and was more attractive to both local residents and visitors.”

There are also several local retail stores that have developed a following, such as Crystal Energy Infinite, Analista & Co and a local art gallery, the Lees- Reyes Gallery, as well as the Honolulu Coffee Café in the center court, which brings its own ambiance and has become a community venue for events in its own right.

Above the retail levels, TSP also houses a variety of offices, which include Watabe Wedding, Cocos Island, Miki Taxi, the Calypso Group and Nautech Guam Corp.

TSP looks forward to continuing to welcome back visitors and again include new tenant offerings, which it will continue to promote fully in media, to include through TikTok and Metaverse platforms soon.

Mesa says, “We would like to thank the community of Guam for the support, not only throughout the 50 years Tumon Sands Plaza has been in business, but especially for the past two years of the pandemic which enabled us to remain open.” 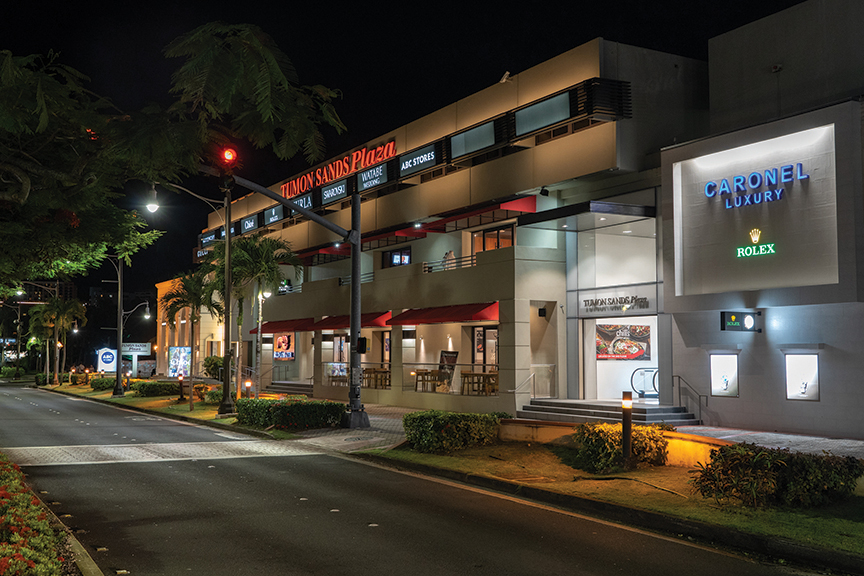 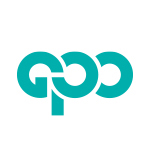 The Guam Premier Outlets location and property have been synonymous with retail since it made its mark in that industry decades earlier.

“The Fukunaga family — which had previously owned a business in Hawaii — came to Guam in the 1970s. They immediately took notice of the unrealized potential for retail business in Guam,” says Monte DM Mesa, general manager.

Through a partnership with Felix M. Camacho (father and grandfather of former governors Carlos and Felix Camacho). The partnership provided the essential foundation for Gibson’s shopping center, which would make its mark for 22 years on Guam’s retail industry.

In the 1990s Guam’s retail industry saw a shift due to the entry of national chains. Mesa says, “The company partners saw the potential of a fresh shopping experience, only this time in the form of an outlet mall.” Real estate developer Dick Gushman was brought onboard to carry out the modifications to the Gibson facility to accommodate the new shopping mall format — with added attractions. “This format included the addition of a state of the art 14-screen movie theater with stadium seating, a food court, additional store spaces and an extended parking lot,” Mesa says. GPO opened its doors on Oct. 30, 1997.

Through their talents, GPO offers free wheelchair rentals, kiddie carts for kids at a nominal $5, a soft play area and — coming soon – a dog friendly environment. “We are working on getting our shuttle bus service up and running as well,” Mesa says, as GPO pivots back to full post-pandemic service.

The appeal of Guam Premier Outlets to visitors from the region and beyond and to residents alike as the only outlet mall in Guam has not changed. “With corporate-owned stores like Ross Dress for Less, Famous Footwear, Tommy Hilfiger and Calvin Klein — to name a few — customers can avail of the special discounts and deals that these nationally-owned tenants offer,” Mesa says.

Plus, GPO continues to attract nationally owned tenants because of its vibrant mix. “We also have local operators that have been a part of GPO since the beginning – further adding to the shopping center,” he says.

GPO is known as a family friendly shopping center — and a welcoming one at that.

“We’ve received compliments throughout the years on the level of customer service that our loyal shoppers experience,” Mesa says.

Ever-community minded, GPO is a contributing business on multiple levels. “We also have a good standing reputation with regards to donating to non-profit organizations that assist our community, women and children,” he says.

In an ever-changing retail environment, there is the certainty that outlet and value shopping will continue to be strong attractions, despite any challenge from on-line purchasing. “Our local customers will continue to be smart shoppers and purchase at the best values for their selected product choices,” Mesa says. The appeal of GPO’s restaurants and food hall is undimmed, with a local ambiance, and great menus inspired by local chefs. “They will continue to attract local residents and most especially our tourist visitors from Japan and Korea,” he says.

And Guam Premier Outlets will continue to lead in delivering appeal and meeting customer expectations and desires.

GPO will reduce its carbon footprint by 25% by 2030. Not least as a benefit to tenants, the mall will continue its multi-level marketing strategy, with the latest and most effective social media marketing tools in Tic Tock and metaverse channels.

And for island residents and visitors who desire to shop and travel with their fur babies, Mesa says, “GPO will be the first Pet Friendly Shopping Center.”

After 27 years, Lone Star Steakhouse is a favorite with generations of customers 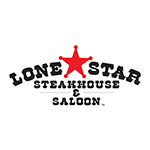 Lone Star Steakhouse on Marine Corps Drive in Tamuning was originally part of a larger Restaurant Group called Pacific Ventures, which had other restaurants in Guam as well as Southern California.

Owner Brian Artero says, “At that time my expertise was in the bar business. I was initially brought on as a consultant to assist with opening the bar. I fell in love with the concept and eventually joined the team as the general manager.”

Lone Star opened in 1995 as part of a first wave of new restaurants being developed in Guam and has grown to now employing about 50 team members.

But in the beginning, success took Artero off-island. “Two years into the operation, I was tasked with moving to Southern California to open more restaurants for the company as an area manager. At 28 years of age, I moved away from Guam to plan and develop restaurants, oversee construction and begin what was to be a back-to-back development project in the SoCal region,” he says.

After opening three successful restaurants in California, Artero was asked to move back to Guam to oversee the Guam operations and promoted to the role of vice president.

“We later decided to sell off some of the restaurants in our portfolio. In that timeframe, I began negotiations with the owners to buy Lone Star Steakhouse. In August 2002, we successfully closed that deal and Lone Star became a locally owned and operated restaurant,” Artero says.

The strength of Artero’s group continues to be its impeccable service standards, and a consistent and gold standard model of service based on its instilled culture and philosophy.

“We continually train and practice in the areas of service, guest relations, and product knowledge. Service and guest relations are two separate disciplines and we identify this and instill these traits,” he says.

After 27 years, Artero can understand what the next years will bring. “The future trends of this industry will be in technology and how it is implemented into the guest experience. From ordering and paying at the table to guest profiles being saved for easy completion in the online take-out process, to third party delivery services. We will soon see interactive electronic menus, making it easy for guests to see and learn about the products they are considering ordering,” he says.

As the restaurant reaps the rewards of continued popularity, Artero says, “My message to the community is one of gratitude. We are extremely grateful to constantly be placed at the top of their list in terms of their dining plans.” Lone Star now sees a second generation become its clientele. They are adults that were brought by their parents as children who still consider Lone Star Steakhouse as one of their top favorites. Artero says, “I thank the island of Guam for keeping Lone Star in their hearts.” 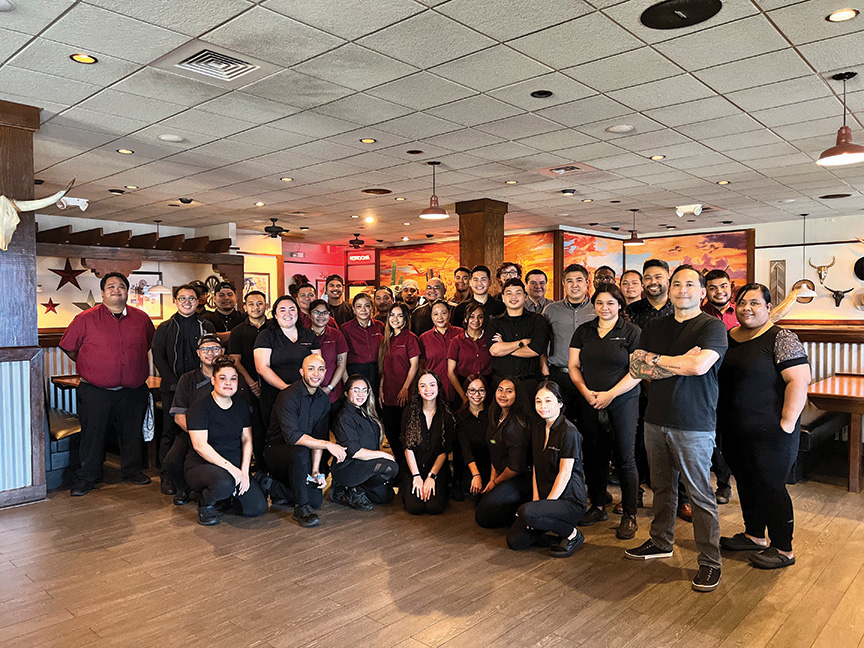