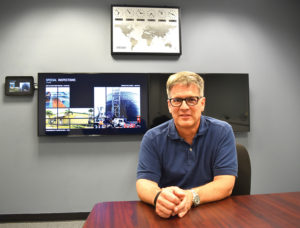 By the time Hernan A. Bonsembiante reached the age where he could think for himself, he knew he wanted to be an engineer.

He could not imagine being anything else. He recalls days as a young child peering out the window of his home to stare in awe at the hustle and bustle of nearby construction — trucks driving in to drop off and transfer materials while workers slowly put everything into place.

“My mom told me that by the time I was 3 or 4 [years old], I’d say I wanted to work in construction. I was just fascinated by the trucks,” Bonsembiante says.

AmOrient Engineering’s vice president of operations has an extensive background in different facets of the field, from design to management to business development to hands-on construction. But the most satisfying part of the career, he says, is being able to see the finished product from satellite imagery.

“I love the fact that you’re able to create something that’s most likely going to be there even after you’re gone. You’re modifying the earth to make it a better place to live in,” Bonsembiante says.

Bonsembiante, 56, hopes to expand AmOrient’s services now that he has a bigger role to play. John M. Robertson, president and principal engineer of J.M. Robertson Inc., which does business as AmOrient, has stepped aside to spend more time in the mainland. Robertson will fly back from time to time to check on business, but Bonsembiante bears a greater responsibility in the company.

“I’m trying to get AmOrient to project itself outside of Guam” and not limit the work to here, Bonsembiante says.

He observes that many projects on Guam are given to off-island contractors even though the local businesses are just as qualified to take them. This could upset local contractors because it reduces job opportunities, but Bonsembiante sees it differently.

“If those companies from the U.S. can get jobs here, then Guam companies should be able to take jobs there,” he says. “If I can be more aggressive in finding ways to access and find work in the mainland, local engineers will see that there is a future here. If you’re only looking to Guam for work, it’s very hard because it’s small.”

Moving forward, AmOrient will take a more active approach in looking for contracts instead of “waiting in line for hand-me-downs,” Bonsembiante says. He knows there’s work out there because the multitude of engineering work he had prior to AmOrient made him travel across the Pacific and Atlantic Oceans.

Bonsembiante was born in the United States to Argentinian parents with Italian backgrounds. He graduated from the University of Buenos Aires’ six-year civil engineering program in 1988 and from there on out, he says he was immersed in the career he was born to do.

He first came to Guam in 2001 after military contractor Raytheon asked him to serve as the naval base’s chief engineer. He relocated from Andros Island in the Bahamas and grew from a junior civil engineer to chief engineer during the 12 years he worked at the Navy’s Atlantic Undersea Test and Evaluation Center.

“I didn’t know much about Guam, other than the war stories in history books. But my wife had friends here and she liked the idea of relocating,” he says. It was here where his two sons grew up, and this later became an anchor for the Bonsembiantes’ stay on the island.

He parted ways with Raytheon in 2005 and joined Smithbridge Guam Inc. as a contracts manager for civil projects. Then, in 2008, Smithbridge moved him to New Caledonia to build a port for a nickel mine. The many challenges of this project — learning French, cooperating with unions and tribes and working with a strict timeline — convinced Bonsembiante to call it his favorite one to date.

After three years, Bonsembiante moved to Australia, still under Smithbridge. It was then that Bonsembiante’s son told him that he wanted to finish school on Guam. Robertson, who Bonsembiante knew from his time with Raytheon, invited him to join AmOrient on the island. One year later, at the beginning of 2013, Bonsembiante moved back to Guam and started with AmOrient the next day.

With nearly 30 years of experience under his belt, Bonsembiante says it takes a detail-oriented, thorough and inquisitive individual to remain strong in the field.

“Anyone can build a house. Construction workers don’t need a degree to put a house together. Where an engineering degree comes into play is thinking how you can make the house better at a faster pace with a smaller budget. That’s always something you keep in mind,” he says.