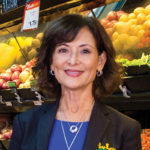 Kathy C. Sgro, executive vice president and chairwoman of Pay-Less Markets Inc., is no stranger to accomplishment. Long a prominent figure in Guam’s business community, she sits on several boards to include the Guam Women’s Chamber of Commerce and Kamalen Karidat, was Guam Business Magazine’s first Businesswoman of the Year in 2006 and was honored with the 2014 Top Women in Grocery Award by Progressive Grocer, a major grocery industry periodical.

But more than any accolade, it’s the mission of Pay-Less that motivates Sgro to accomplish everything she has.

Born and raised in Guam, Sgro earned her marketing degree at Santa Clara University — her father’s alma mater — and her master’s in business from Golden Gate University before getting a job at the now defunct Meier and Frank department store chain in Portland, Ore.

After her first child was born, Sgro and her family moved back to Guam. Having found retail to be an exciting field, she started working as a marketing manager with Pay-Less.

“It was a good opportunity,” Sgro says. “The industry was very crude at the time. When I came back to Guam in 1987 we were still putting prices on products. We were transitioning to electronic pricing at the time and I helped with the implementation and training of the IBM 4680 point of sale system. So that was very exciting.”

After years in the field, two things continue to drive Sgro’s passion for her work: the

dynamic nature of the grocery industry and the relationships she has made. 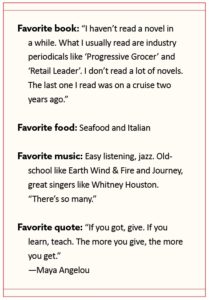 “Connecting with our employees and connecting with our customers, I really think that’s what gives me my energy and my juice for the day,” Sgro says. “I get my excitement from being able to fill the need of what our community wants, what our customers ask for and new things we’re able to offer as the largest grocery store on Guam. I believe we have a corporate responsibility to make sure we bring in the freshest products and from a community standpoint, we’re also very concerned about the sustainability of our island, such as with our mission zero bag program and many other initiatives.”

According to Sgro, Pay-Less is committed not only to preserving the island’s environment, but the culture as well.

“We incorporate the language into a lot of our signage,” Sgro say. “We’ve included the latte stone in our architecture. So sustainability and the preservation of our culture is also a part of our mission.”

“Look at Whole Foods, how it was bought out by Amazon,” Sgro says. “The whole dynamic of grocery shopping is really evolving quite a bit. It’s exciting,” she says.

Being a key local leader in such a fast-moving industry might be overwhelming to some. Because of this, Sgro emphasizes the importance of balancing work with family and recreation.

“I believe balance in life is very important, so every morning I run,” Sgro says. “It’s a ritual of mine since I was in college.”

In addition to running, Sgro adds hiking, scuba diving and snorkeling to her list of favorite activities.

Even more than the challenges and accomplishment that have marked her career, Kathy Sgro’s belief in the importance of the Pay-Less mission and its place in the community as both a conduit for a fundamental human need and a public space is what keeps her going.

“You hear many stories of people meeting and talking in Pay-Less,” Sgro says. “Everybody eats. The grocery store is, I feel, the heart of a community.”