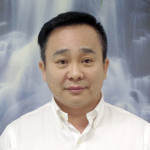 The first phase of Juno Eun’s career may sound like a familiar line from the resume of a successful CEO. After graduating from one of the top schools in Korea, Eun spent a decade putting in 105-hour weeks as an investment banking lawyer.

At the peak of his career, Eun retired. But during what he calls the second phase of his life, he decided to choose a new path. He retreated into the mountains, and for nine years, he traveled and learned how to meditate.

While meditation taught Eun to gain clarity and focus, eventually he decided he could have a greater impact working among others he could potentially help.

“Even if you devote yourself to goodness as a monk or a priest, if you stay in the mountain, who are you going to help?” Eun says. “I believe everything in this world, from the flower to the ant to the cockroach — they don’t live for themselves. Only mankind thinks he lives for himself, but flowers live for the butterfly. So everything has an external purpose. If I become a great person, that doesn’t do anything for anyone else. If I can help make someone else’s life better, then I have done more than myself.”

That’s when Eun decided to leave the mountains for the islands.

“When I came down from the mountain, my Japanese friend asked me to help restructure his company on Guam. I told him I would spend six months to a year on Guam, and then I would leave,” he says. “I didn’t know Guam very well, though — like a doctor, I found the problem and wrote the prescription, but he was going to need more manpower, and he couldn’t get more manpower on Guam, so it was a prescription he could not follow.”

Juno Eun’s youngest brother, Ho Eun, had already been in Guam for 25 years and had founded Core Tech International in 1991. The two decided to become partners when they were hired to develop a resort for Gun Beach. Between the Gun Beach project and the newly announced military buildup, Guam looked like a place of opportunity.

“That’s when I decided to stay in Guam. [In 2007] it seemed like a good place to warm up before I went back to the city,” Eun says.

Though that project did not go through, the Eun brothers began several other projects under Core Tech Development LLC — an arm of the company they began in 2008 — many of which allowed Eun to address certain needs of the population as he aspired when he ended his years of meditation. These included developing barracks into apartments, leasing their Tiyan lot to the government of Guam for the students of John F. Kennedy High School when its Upper Tumon facility was condemned in 2009 and developing several low-income housing areas.

Today Core Tech Development is one of the largest employers on Guam and includes the subsidiaries Core Tech Concrete, Core Tech Korea, Core Tech Energy and the Guam Daily Post.

Many years and thousands of miles away from the mountains where he found himself, Eun continues to practice the skills he learned. A large photograph of a waterfall covers the front wall of his office, and Eun says he still finds time to meditate every day.