The opportunity to meet and interact with customers face-to-face is precisely the reason Mika Caldwell enjoys working in retail and wholesale.

As vice president and general manager of Archway Inc., which comprises The Beverage Source, Infusion Coffee and Tea and I Love Guam, Caldwell often finds herself at the forefront of the business’s operations. Customers are the main indicators of whether a product works or not, she says, so it’s important to be able to get their feedback.

“When I see my customers in the café and they tell me how much they love our coffee or how much they love our food, that makes me happy. When my customers tell me that Infusion is their second home, that makes me happy,” she says. “Retail is not only about creating and filling a need, it’s also about creating satisfaction and that’s what I enjoy the most.”

Caldwell saw her career develop and grow on the island even before she was legally an adult. Her experience in customer service started while she was a student at John F. Kennedy High School.

She worked as a rental car agent, a front desk clerk and an accounting clerk in her high school years. As she pursued a marketing degree at the University of Guam, she continued to build her work portfolio. At the age of 21, she earned her first managerial position at Benetton where she ran five stores on Guam and Saipan. A few years later she became a buyer and operations manager with wholesale company Bluebell, which sold higher-end brands like Tag Heuer, Rado Watches, Cross Pens, Davidoff Cigars, Moschino, Guess and Anne Klein. 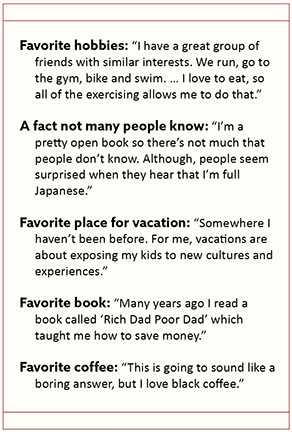 After this much experience in retail management, Caldwell had the confidence to begin her own business selling several product lines, one of which was coffee. However, she soon realized that starting her own business was a lot tougher than it seemed.

“In this industry the biggest challenge is finding the balance in your inventory. It sounds simple but it’s a constant balancing act. If you buy too much product, you hurt your cash flow, if you buy too little product you lose sales.”

Guam’s proximity to the mainland United States complicates this, as most Guam products are imported and there could be delays in shipments that cannot be avoided, she says.

“Sometimes people quit their jobs to start their own business, thinking it will be easier because you can make your own hours. Owning a business is a 24-hour job, 365 days a year. Even when you are on vacation you still have to be on top of things,” she says. “It just takes perseverance.”

After her coffee wholesale business folded, Caldwell offered her leftover inventory to her long-time friend and colleague Richard Chan, who was starting his own business as well. His business eventually became successful and he asked Caldwell to partner with him. Fifteen years later, she remains happy for making that decision. Now with nine Infusion locations on Guam, Caldwell still finds it hard to believe how much the company has grown.

On starting a new business, Caldwell says that while it’s okay to pursue financial goals, the business should always align with what makes the entrepreneur happy.

“We work so hard every day chasing the money, chasing the success and chasing the dream, but if you are not happy with who you are and your life, the money alone will not satisfy you.”

Caldwell says her happiness is found in her two children, Mason and Mayumi and she is proud of how they have grown. The two have special Infusion items named after them, Caldwell says.

She also loves seeing the expressions on people’s faces when they try a new item on Infusion’s menu. It’s that connection with consumers that make her feel she is fulfilling a need and bolstering customer satisfaction. And with the friendly people of Guam, it’s hard not to feel like a family community, she says.