From military to management 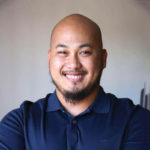 Robert F. Salas grew up on Saipan, Guam and Hawaii as the youngest of nine children. Salas says he and his family didn’t have much in the early years, so as a young man he was motivated to own and operate a business.

His first taste of the food and beverage industry was as a server at King’s restaurant in 2004. He joined the U.S. Army in 2005 and served with the 7/17 Calvary and the 25th Combat Aviation Brigade until 2015. A career in the army, Salas says, was the greatest influence on his journey.

“I had a lot of great leaders. My army career taught me about execution and operation — how things come together and how many people it takes. It was a big part of what drove me to want my own business,” he says.

Salas retired from the army after 10 years of service, moved back to Guam and began studying business at the University of Guam. However, classroom learning was often frustrating for Salas.

“Going to school after a career is very different from going to school before a career. It’s a lot of busywork to develop and prove your work ethic, but I was already there,” he says. 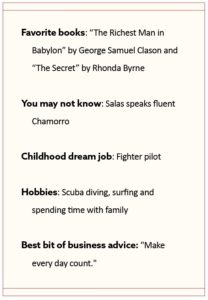 While Salas studied at UOG, he began working at Horse & Cow Pub & Grill in October 2015. He worked as a bouncer, server, bartender and eventually manager. In November 2016, Salas was promoted to general manager.

He says that performing various roles at the restaurant has allowed his expectations to be realistic.

On his forearm, Salas has a tattoo of the word “discipline.” He got the tattoo to remember that almost anything is possible through hard work and discipline.

“I got [the tattoo] to remind myself of all I can accomplish. If you wake up one hour earlier than everyone else and you do that 24 times, you actually gain a day. You have a day more than everyone else,” he says.

One of the main reasons Salas chose to live and work on Guam again was to rediscover his personal drive.

“High school on Guam was really rough for me. Those experiences gave me a drive that I took into the army, and I was pretty successful in the army. But [after several years] I felt like I plateaued a little bit. I found success in the army but I got comfortable. So I wanted to come back here to find that drive again — and I feel like I have,” he says.

Meeting great people is one of the best aspects of working as general manager, Salas says. He also has greater influence with his ideas and opinions, and he’s grateful to Michael Looby, owner of Horse & Cow, for teaching him everything he knows about business.

“He’s honest with me if ever I have ideas that are just dumb, or he’ll let me know if it’s a good idea and tell me to run with it. So he’s been a great compass,” he says.

In addition to managing, Salas is pursuing several business projects and ideas. In the process, he’s learned just how much people matter.