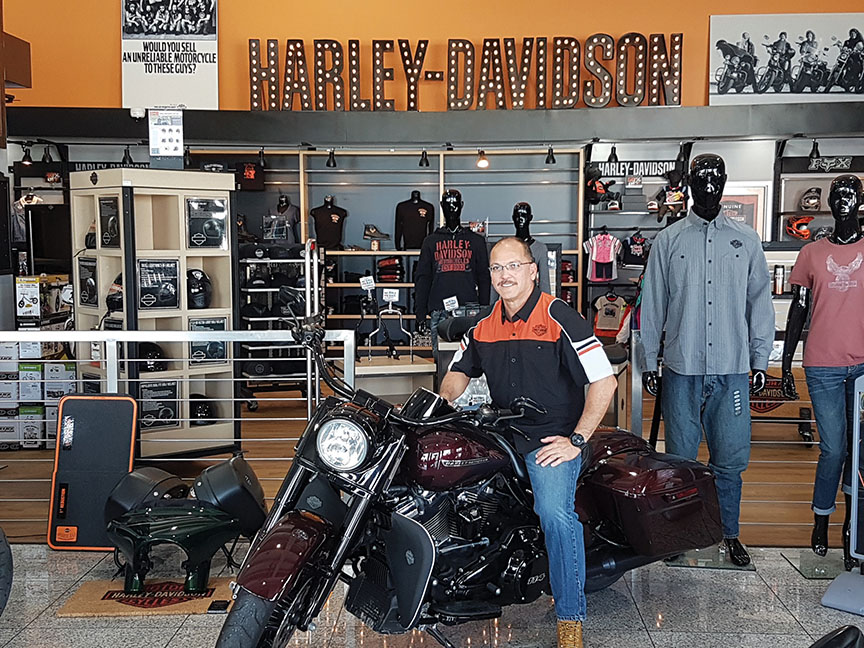 “You don’t just buy a bike, you know?” he says. “The culture and lifestyle of Harley is really strong. You see it all over.”

Crisostomo has been moving fast for as long as he can remember, racing jet skis, four-wheelers and street bikes, traveling the world to feed his need for speed. Refusing to buy a brand that wasn’t being sold by his brother Joey — president of Cars Plus and Cycles Plus — Crisostomo was finally able to venture into “the other side” when Joey asked him to be his business partner.

“My brother owned Kawasaki, he owns Polaris and Suzuki, and there’s no way I would ever own a bike that he didn’t sell,” Crisostomo says. “You can call it loyalty — I call it family. But when this opportunity opened up, I was like, ‘Wow, talk about your dream job.’”

Before his current position, Crisostomo worked in the human resources department for one year at sister companies IT&E and IP&E; and prior to that had retired from Continental Airlines after 27 years of service, where he worked in human resources as well.

Motor sports had always been a hobby.

“I was having a great time,” he says of his time at IT&E and IP&E. “I love their philosophy and they took care of their employees as well. So when my brother and I first talked about Harley, I thought he was asking me to come work for him, and I thought, ‘Man, I can’t leave my job, I’ve only been there a year, maybe a year and a half.’”

Crisostomo had a personal rule that he would always commit himself to a job for a minimum of two years, since any company that hired him was investing in him.

“After talking with my brother, he asked me to partner with him and his daughter Jenny Camacho,” he says. “That changed everything.”

Before joining his brother, however, Crisostomo says he still felt he owed it to Ricky Delgado — CEO of Citadel Pacific Ltd., parent company of IT&E and IP&E — to personally tell him about his decision.

“He said he was upset because we hadn’t finished everything we had set out to do, but that he’s happy and excited for me because I have a chance to work with family,” Crisostomo says. “He shook my hand and at that point I felt like he gave me his blessing, which was important for me because I didn’t live up to my commitment to him. He understood I wasn’t leaving him just to find another job. I wouldn’t have done that even if it paid more, because he took care of me.”

In the time since he’s managed the storied brand on Guam, Crisostomo says he’s been able to see the draw of Harley-Davidson’s history, even as its appeal has spread to younger customers.

“Harley has been going after younger customers, and you’re starting to see it on Guam,” he says. “We’re having 20-year-olds buying Harleys now. Before the 20-year-olds only bought café bikes and would say, ‘When I get old I’ll buy a Harley.’ But now you’re seeing a lot of younger people riding Harleys.”

The Harley culture isn’t just about leather vests, denim pants and Harley-Davidson t-shirts, Crisostomo says. Biker culture on Guam has grown to revolve largely around giving back to the community, with motorcycle riding clubs on-island contributing to everything from veterans causes to candy runs, where they donate candy to children in low-income housing areas.

“It amazes me how much they give back to the community, and it’s all volunteer,” he says. “If you put all the money together from all of the clubs, it’s easily hundreds of thousands of dollars a year.”

With such a community-oriented focus and a personal commitment to loyalty, it’s not surprising that one of Crisostomo’s guiding principles in both life and work is the importance of dignity and respect.

“It was one of the cornerstones at Continental Airlines,” he says. “Everybody deserves dignity and respect, no matter who you are. The janitor comes in at night to clean up, I say ‘Hi’ and sit and talk with him. When I’m leaving for the night, I talk to the guard a little bit and try to put a smile on their face. Everybody deserves dignity and respect.”

“When someone is making excuses or not being truthful, that’s when I get a little upset,” he says. “People make mistakes. If you make a mistake, let’s check on that mistake and see what we can do to make sure it doesn’t happen again. But if you’re lying to cover for that, that is one of my biggest pet peeves.”

When not selling — or riding — motorcycles, Crisostomo can be found playing soccer, watching his children play soccer, or working out at Unified CrossFit.

But no matter what, it all eventually comes back to riding — for him and his entire family. His wife and daughters ride motorcycles and once celebrated Mother’s Day with a family ride down south.

“If there’s a sunset, I don’t make it home right away,” he says. “I’ll pass by the house and go up to the airport just to turn around and see the sunset while I’m riding my bike. I joke about it, but I always say that riding Harleys — and motorcycles in general — makes me a better husband and a better father, because if anything was stressing me out at work, by the time I get home I’m relaxed and a much better person to deal with.”

Favorite app: Facebook. Really to touch base with people I don’t see very often and to see what’s going on with their lives. A lot of junk comes with it, but when you see this picture of a person you haven’t seen in 10 years, that’s what I like about it.
Favorite movie: Remember the Titans. I’ve watched that movie over and over just for the lessons that are in it.
Best advice for work or personal life: Never stop learning. Always look for ways to learn.
Best advice for others: Don’t ever think someone else doesn’t have an idea that’s better. Doesn’t matter if it’s my idea or your idea, it’s which idea is the best idea.
Typical coffee shop order: Café latte. I like it for two reasons. One, it’s usually perfect if I get it at the right place, and two, it’s easy. It’s coffee and milk and sweetener. So I like it because it’s simple.