Kenneth V. Payne: Wake up and smell the coffee 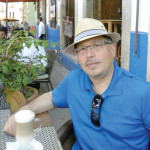 You can tell I’m very passionate about my coffee,”

says Kenneth V. Payne, CEO of Guam Coffee Co. LLC. “When I travel — whether it’s to Bangkok or Paris, New York or L.A. — I’m going to a coffee shop. I also like doing business in coffee shops. … I acquired a taste for coffee, and I like the chemistry, the process of making it and all the toys.”

At home, Payne has 26 different devices for making coffee, as well as an AeroPress for travelling. When he travels, Payne seeks out urban jungles to explore.

“I’m a spoiled traveler,” he says. “I like hotels and quality restaurants, but my friends and I are always seeking out startup restaurants, anything that is new to us.”

More than a café owner and connoisseur, Payne is also a seasoned civil engineer, driven by a philosophy of sustainability and a life-long habit of following his intuition.

In his early days of training for a career in land development, Payne recalled that he often drove by a beautiful clearing on his way home with a large red barn, surrounded by horses. It was a small moment, but each day got better when he passed this place. One day, some years later, a project took him out to a place in the country where he found a large pile of red wood from a demolished house, or a barn.

“I realized it was the barn I used to like to look at,” Payne says. “So I quit that company and decided to go into environmental service.”

“I started the engineering company as a part-time job and the coffee shop as a part-time job, but they both turned into full-time jobs,” says Payne, who now divides his time between his homes in San Francisco, Folsom and Guam.

Growing up as an Air Force brat, Payne left Guam with his family in 1973. When he finally returned in 2012, he was surprised to find the most important ingredient for his favorite pastime in short supply.

“I was complaining to my dad that I couldn’t find a good cup of coffee, and he says, ‘If you can’t find one you like, you should open your own coffee shop,’” Payne says. “So I did. … People thought I was crazy because I’ve never been in the food and beverage business before. I didn’t even know how to ship things. I knew how to buy coffee, but I didn’t know how to buy equipment.”

Payne’s first move was to find a quality roaster. If he had a good product, he knew he could sell it. After spending weeks traveling around the United States, Payne finally discovered Vaneli’s Coffee just 20 minutes from his Folsom home, owned by Gene Lemos. Since then, Lemos has become a friend, mentor in the trade and long-distance espresso machine mechanic.

As a lover of coffee, Payne prides himself on spreading his gospel of quality brewing across the island. A self-proclaimed Ethiopian-coffee addict, his current favorite is actually a roast from Kawaii’s Ka’u Coffee Mill. “When I tried it, I thought, ‘This is how coffee should taste,’ like when you open up a new can of coffee and get that fresh smell,” he says.

A supporter of local farmers and products and from a family that used to own a coffee plantation, Payne looks forward to a resurgence of agriculture on Guam.

“There’s plenty of sunshine, plenty of water. It’s so easy to grow things there,” he says.