Unprecedented growth on the horizon 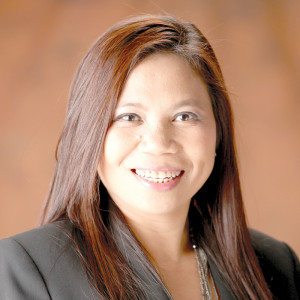 Guam is on the verge of unprecedented growth. We’ve all heard that before, but real estate activity is moving toward this more and more. Our two largest industries, military and tourism, are in the new era. The move of 5,000 Marines from Okinawa and related activities are no longer an “if.” Guam is on the Fodor’s Travel Go List of 2016. The Wall Street Journal covered Guam’s luxury housing market in its Nov. 5 edition. Even Hollywood is on the program of upgrading Guam’s status as a place to go. We’ve gone from a place to move if you’re escaping the FBI in Danny De Vito’s 1996 “Mathilda” to an actual place in Adam Sandler’s 2015 movie “Pixels.” Well, we were being attacked in the latest movie, but that’s beside the point.

On Aug. 29, the Record of Decision for relocating Marines to Guam was issued by the Department of Navy. The ROD identifies NCTS Finegayan as the cantonment and Andersen Air Force Base as the family housing. Further, the ROD selected Andersen Air Force Base’s Northwest Field for its Live-Fire Training Range complex. The ROD paved the way for the military buildup to begin. Joint Region Marianas announced on Dec. 30 the completion of a $25 million, 60-home project on Naval Base Guam. The news noted that other projects preparing for the move of 5,000 Marines from Okinawa are underway.

On the tourism side, we saw record months for arrivals in 2015 including November and October. The 12th Festival of the Pacific Arts will be held on Guam from May to June. In fact, FestPac was touted as the reason why Guam was on Fodor’s Go List for 2016.

The Dusit Thani Guam opened in July and has since reportedly raised the average room rate of hotels in Guam. Ken Corp.’s new hotel construction on the Hotel Nikko Guam property is underway. The Wyndham brand has entered the market, taking over the Aqua Suites Guam property, and Best Western and other chain hotels are eyeing Guam for locations. Recent encounters with prospective hotel investors in Guam noted they are willing to pay above-market value to have an existing hotel, considering Guam’s high construction costs and daunting permitting process. 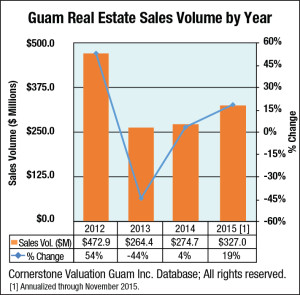 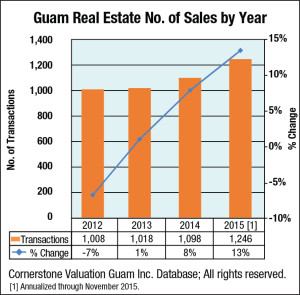 Chalan San Antonio became one of the hotspots in 2015 with the completion of Applebee’s and IHOP and the renovation of Wendy’s in addition to the existing Ruby Tuesday’s, Chili’s, King’s and KFC. Other facelifts on the road include California Mart’s new location, Japan Mart and the Great National Insurance Underwriters Inc. office. The two most recent land sales on Chalan San Antonio reflect unit rates upward of $400 per square meter. And development on the street is not slowing down yet. The next phase of the Camacho Landmark Center is expected to be completed by the end of 2016, adding more available spaces to Guam’s commercial center.

Route 3 sales continue to add inventory to Guam’s industrial land offerings. The opening of Guam Regional Medical City and the fact that the new Marines cantonment is located along this road will transform this area in the next few years. The former Ukudu Workforce Village is under the new ownership of Core Tech International, and we will see transformation on this area. Noting what Core Tech did with its Summerville project, where it converted the formerly run-down Tumon Village Apartments into a successful apartment operation, it will be for the better. A new half-acre industrial lot subdivision is on the market. Various other retail developments are in the pipeline along Route 3. 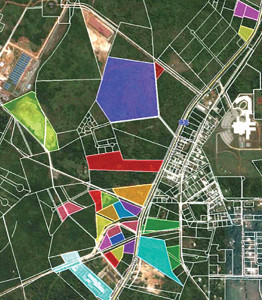 Notable sales over $1 million in 2015 include land, various commercial buildings, apartments and residential units. Land with ocean frontage on prime Pale San Vitores and Marine Corps Drive frontages were the four highest priced pieces of land in Guam in 2015. Nine commercial/industrial buildings made the list. Seven residential units, including two condominium units, are on the list. The list is completed by two apartment sales in the coveted areas of Tumon and Tamuning.

We’ve seen more and more qualified professionals coming to Guam, including many who were born and raised here and have decided to trade metropolis living for a paradise lifestyle. And what’s not to like? Guam is family-friendly with white sandy beaches and blue water 15 minutes from almost anywhere on the island. My sisters, who live in Australia, noted as the second best country to live in by the United Nations Development Program, are always jealous of our sunsets. 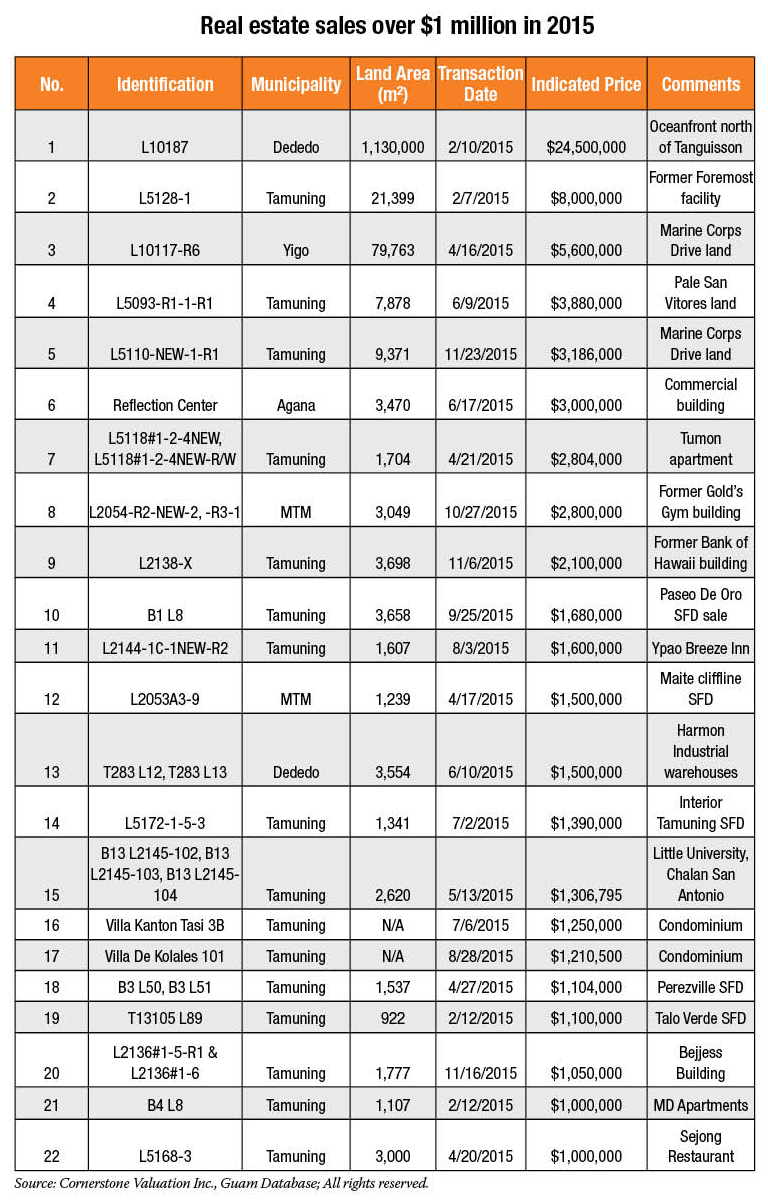 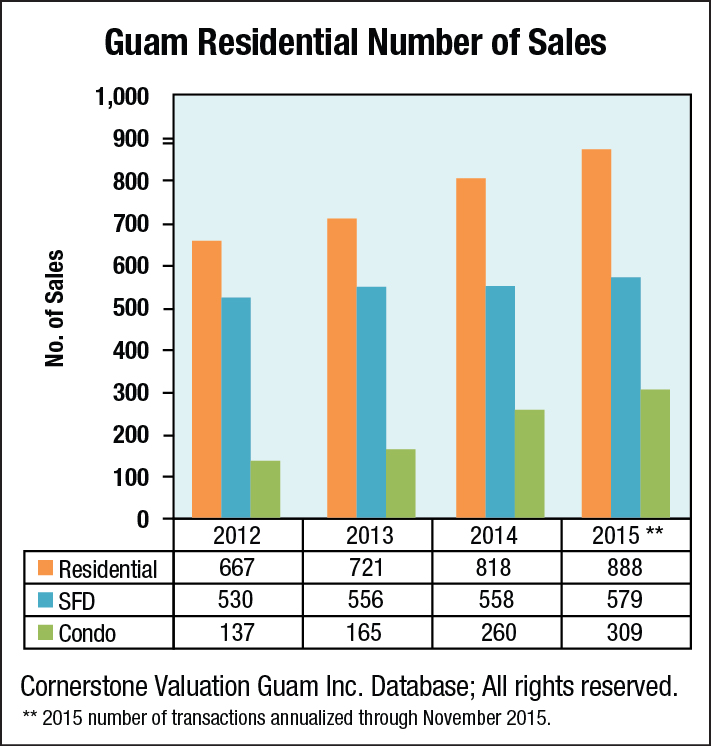 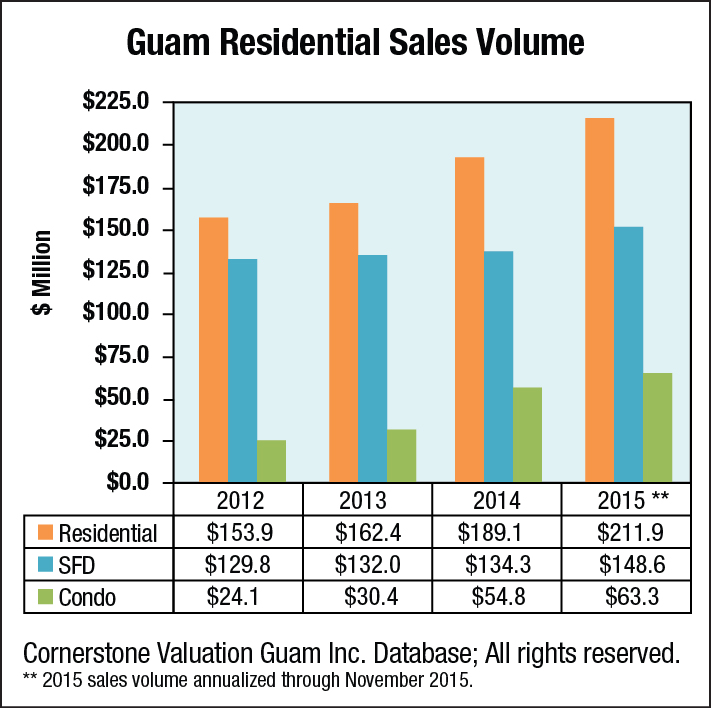 Total residential sales in 2015 reflect $211.9 million  with 888 total sales. The sales volume reflects a 12% increase from 2014 and a 38% increase from 2012. The median price of residential units is stable at $200,000; however, the single-family subcategory median price is at $225,000 and the condominium subcategory is at $168,000. The condominium sector has increased rapidly since 2012 with total sales in 2015 of $63.3 million reflecting a 163% increase over 2012. As we have seen in 2014, more and more off-island investors are entering this market. Although the off-island buyers are in the $250,000 and below price range, this may change along with the addition of higher end supply. This trend is expected to continue as Guam is touted more and more internationally.

In the pipeline, we see investor  interest increasing in support of both of our largest industries, tourism and military. In residential, mom-and-pop builders are developing houses for military occupancy, while foreign investors are taking on mega projects that local operators tend to shy away from. Owner-occupants are building houses from the Talo Verde cliffline down to Inarajan.

In commercial, owner-occupants will still dominate new construction, with several commercial/retail investment projects along Marine Corps Drive and Route 3. Development has to be feasible, and the high construction costs in Guam will remain a buffer to overbuilding, although they did not stop a few prior failed projects.

Investors are also exploring Guam as a data technology center. The June 1 acquisition of GTA Teleguam by Telkom Indonesia is a strategic acquisition that takes advantage of Guam’s location and our American soil.

The toughest barrier in real estate development will include our permitting process.

Tamuning remains the center of residential and commercial activity of Guam. Sixteen out of 22 notable sales in 2015 are located in the municipality. Various new residential units in Yigo, due to its proximity to Andersen Air Force Base, provides for pent-up demand in this area.

Northpoint Commercial center is finally completed in Yigo with KFC as one of its anchor tenants. We understand various other commercial centers are being planned. Agat could be the next Yigo, due to its proximity to the Naval Base, although we don’t expect the same magnitude and it would probably be limited to desirable oceanfront properties.

The off-island investors are our wild cards. We could have interest in line with large cities in the world, especially due to our proximity to China, Taiwan, Japan and Korea. More interest in Guam is always good, but sustainable growth is always favored.

Lastly, the stock market volatility, crashing of oil prices and cash out flow from China opening up 2016 may have both positive and negative impacts in our real estate and economy in general.