The University of Guam’s impact on the island’s economy 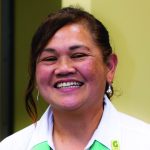 UOG contributed $1 of every $17 in Guam’s economy

UOG created one in every 15 jobs in Guam
UOG created a total of 4,194 fulltime jobs, comprised of

°  237 jobs created when UOG on-island suppliers/vendors spent their incomes, and

°  2,223 when UOG graduates spent their higher incomes, which resulted from their UOG degree.

PURPOSE
This report presents the calculation of the impact that the University of Guam has on Guam’s economy. The main focus will be on additional economic activity and overall income, additional jobs and additional taxes that result from UOG’s existence on Guam.

METHODOLOGY
The methodology used here was first developed by Maria Claret M. Ruane in June 2012, refined in July 2018 and further improved upon in this latest calculation.

Direct jobs are those that establish an employer-employee relationship between the commercial enterprise and their employees, in this case, between UOG and UOG employees. From several sources and the author’s calculations/estimations, the number of employees by UOG and related units was 849.

Indirect jobs are held by persons who work for the producers of materials, equipment, and services used in a commercial enterprise’s capital investment project, but who are not directly employed by the commercial enterprise, in this case, employees by UOG suppliers/vendors.

Local spending multiplier is the amount of overall spending on Guam’s economy not including spending for purchases from Guam-based military base stores, online sources of off-island vendors. This was estimated by Ruane (2011b, December) at 1.30.

UOG DATA
UOG data used in this report include

Calculation of UOG’s direct impact on jobs, incomes and taxes
The UOG Staffing Pattern FY2019 Fourth Quarter and Payroll Reports provided by the Office of Information Technology were used to calculate direct jobs created by UOG and by UOG-related units to include the Research Corporation of UOG, the UOG Endowment Foundation, the Guam Educational Radio Foundation/KPRG and AmeriCorps. Attempts were also made to calculate these direct jobs (along with other jobs in this report) on its Full-Time Equivalence basis, with full-time defined to be 40 work hours per week. As TABLE 2 shows, UOG created 849 FTE jobs, or 849 direct jobs.

It is important to note that payments by UOG as employer and its employees toward retirement, health insurance and other benefits, estimated at $10 million in fiscal 2019, are included in this report.

Calculation of UOG indirect jobs and incomes
The UOG Payments by Vendor List FY2019 was used to calculate indirect jobs created by UOG. This data source was reviewed with the primary goal of tracking the amounts that UOG paid its Guam-based/on-island suppliers/vendors. This required going through the list of 4,222 vendors, defined as individuals or organizations to whom UOG issued payments (usually in checks), which showed a total amount of almost $59 million in fiscal 2019.

First, off-island suppliers/vendors were removed from the list, with corresponding payments of

$5.5 million. Second, a review of the Annual Credit Card Statements showed that approximately 97% of credit card charges estimated at $4.4 million were for purchases from off-island suppliers/vendors. Third, the total amount spent on travel in  fiscal 2019 was obtained from UOG Expenditures by Function FY2018 and FY2019. This amount was $2.5 million, 100% of which was assumed to have been spent during travel and therefore paid off-island. In the future, a system that separates suppliers/vendors into on-island and off-island or codes them as such would be useful for this type of analysis. This sorting could also be done if information about vendor addresses or locations are entered into the existing UOG data base for payments.

For the purpose of this report, which is to calculate UOG’s economic impact, the amounts shown in TABLE 4 were used

At this point, work continued on UOG Payments by Vendor List FY2019 on suppliers/vendors who were now considered as Guam-based/on-island and payments to them estimated at $33.8 million in FY2019 as shown in TABLE 4. These payments in turn became sales revenues to these suppliers/vendors, which allowed them to pay their employees’ incomes, who then pay taxes to GovGuam. Supplier/vendors’ sales revenues were also subject to GRT, another tax revenue source for GovGuam. 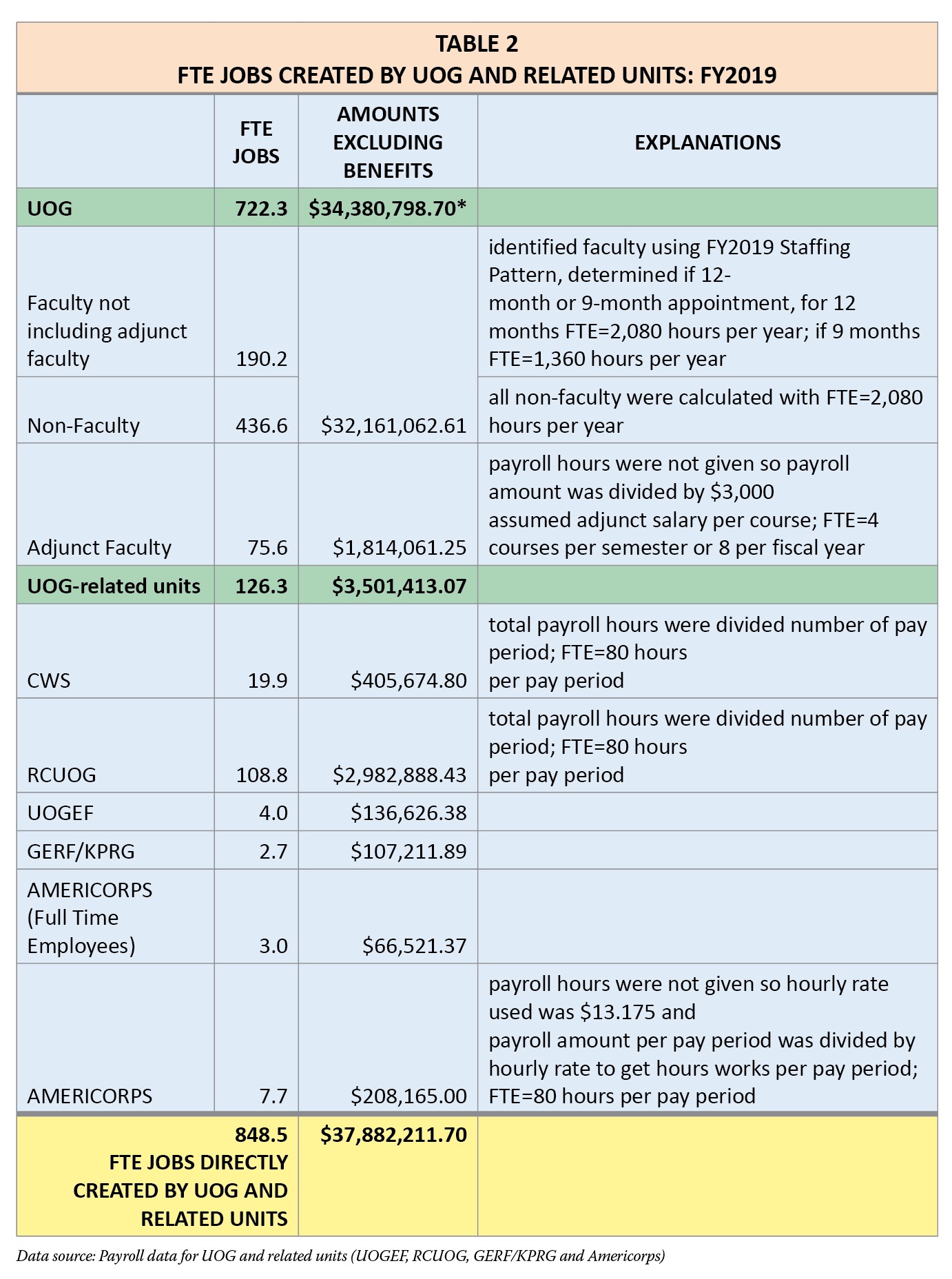 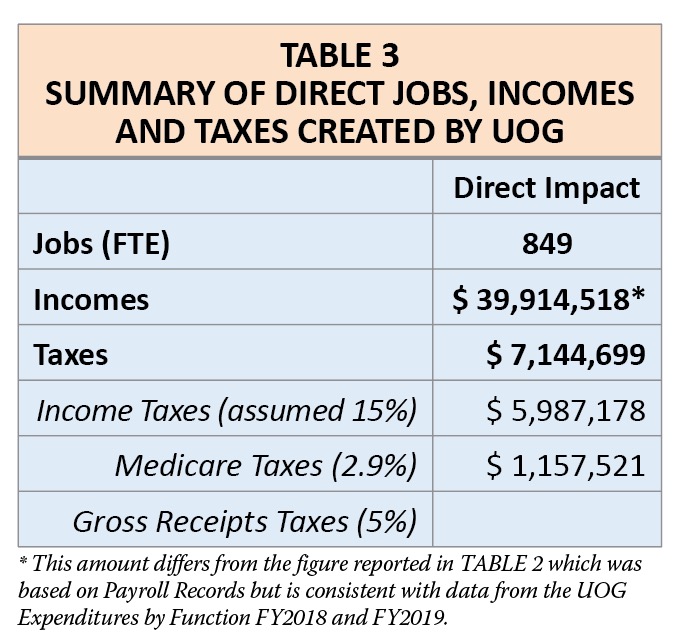 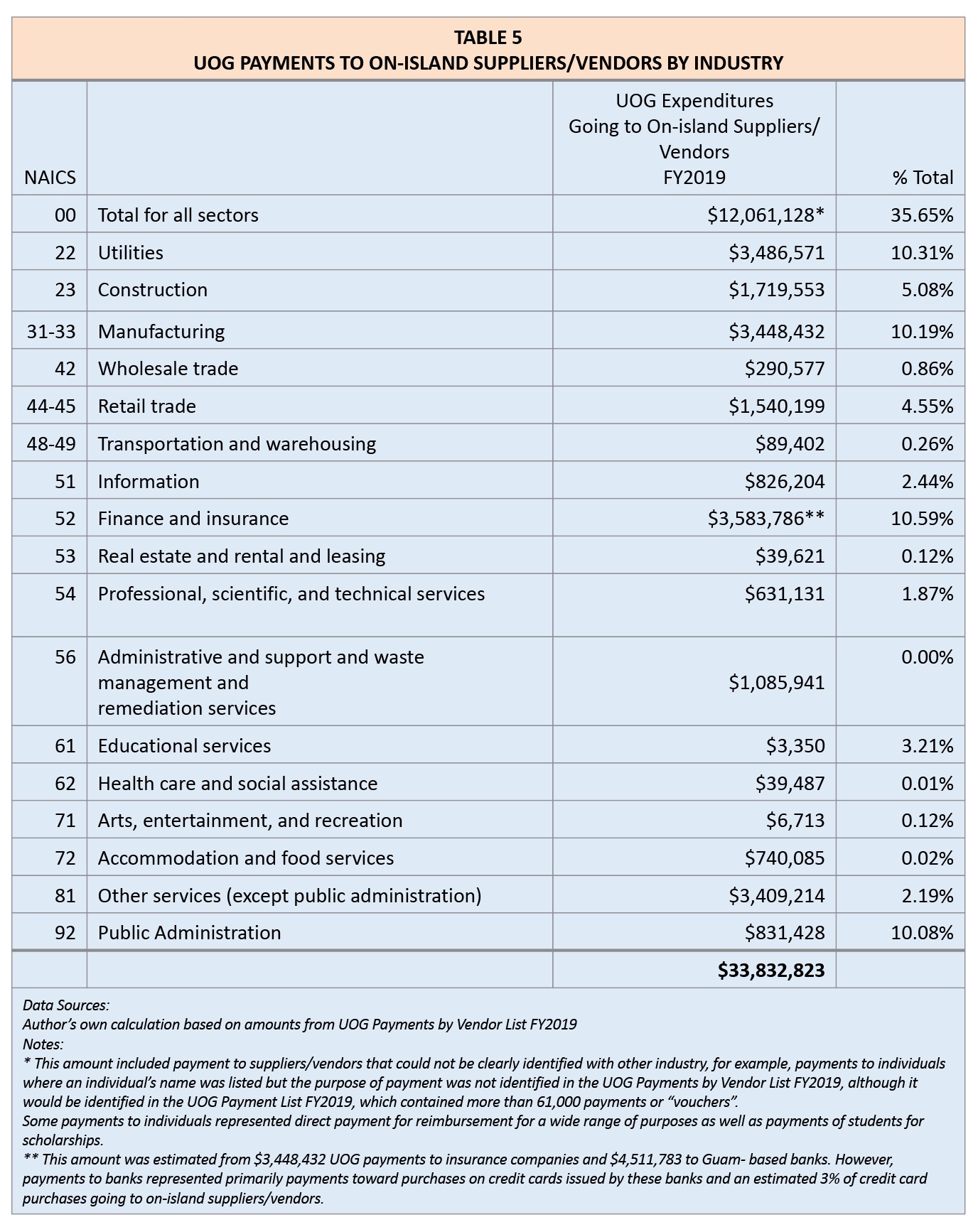