Editor’s Note: The following contains extracts from a recently released and detailed report and action plan that enables the U.S. Coast Guard and its partners to operate to combat illegal fishing in the waters of the Micronesian region and elsewhere.

The full report can be found at https://www.uscg.mil/iuufishing.

Illegal, Unreported, and Unregulated (IUU) fishing is a pervasive security threat to U.S. national interests. By undermining international agreements and fisheries conservation measures, IUU fishing jeopardizes global food security, with pronounced destabilizing effects on vulnerable coastal States. IUU fishing robs legal fishers of their livelihoods, endangering the economic security of all nations with a maritime boundary. Industrial scale fishing vessels deployed by irresponsible and aggressive flag States can increase geo-political tensions, undermining the rights of nations to exercise their sovereignty and benefit from their economic resources. A lack of accountability by these flag States to enforce responsible maritime behavior on their fleets further enables illegal fishing actors to violate international rules-based order and opens the door to transnational criminal organizations to use profits from IUU fishing to monetize a suite of other illegal activities.

It is the responsibility of all nations to deter IUU fishing activity within their capacity and capability, particularly vessels under their own flag. The U.S. Coast Guard has always sought to ensure safety, security, and stewardship at sea. Under this IUU Fishing Strategic Outlook, the U.S. Coast Guard will apply our broad authorities, capabilities, capacities, and partnerships to be a global leader in the fight against IUU fishing. Working with partners in the National Oceanic and Atmospheric Administration, the Department of State, and the Department of Defense, the U.S. Coast Guard will uphold a whole-of-government effort to advance national interests in the maritime domain and promote economic prosperity. Through enhanced engagement with like-minded nations and key maritime stakeholders, the U.S. Coast Guard is ready to spearhead the global fight against IUU fishing. We will do so by pursuing the following Lines of Effort:

Promote targeted, effective, intelligence-driven enforcement operations
The U.S. Coast Guard will lead global efforts to detect and deter IUU fishing on the high seas and in the exclusive economic zones of partner nations.

Through the innovative use of intelligence, technology, data analysis, and information sharing, we will identify, target, and interdict illicit actors in the maritime domain in order to disrupt corrupt cycles of influence that enable illegal operations.

Counter predatory and irresponsible state behavior
The U.S. Coast Guard will prioritize operations and engagement in areas where our efforts are most critical to demonstrate U.S. commitment and model responsible behavior. The U.S. Coast Guard will shine a light on the activities of those who violate international rules-based order, exposing and holding accountable the most egregious predatory actors.

Expand multilateral fisheries enforcement cooperation
The U.S. Coast Guard will build and maintain lasting cooperation with key partners to empower regional resource conservation and management. Working with U.S. and international partners, the U.S. Coast Guard will assist at-risk coastal States and like-minded nations to develop and maintain their own robust counter-IUU fishing capacity, bolstering their governance and enforcement systems and affirming the United States as a preferred partner. Through targeted, persistent, and collaborative efforts, we will sustain and strengthen connections with partner nations supporting international oceans governance.

The global impacts of IUU fishing:
1 One in five fish caught around the world is thought to have originated from IUU fishing: 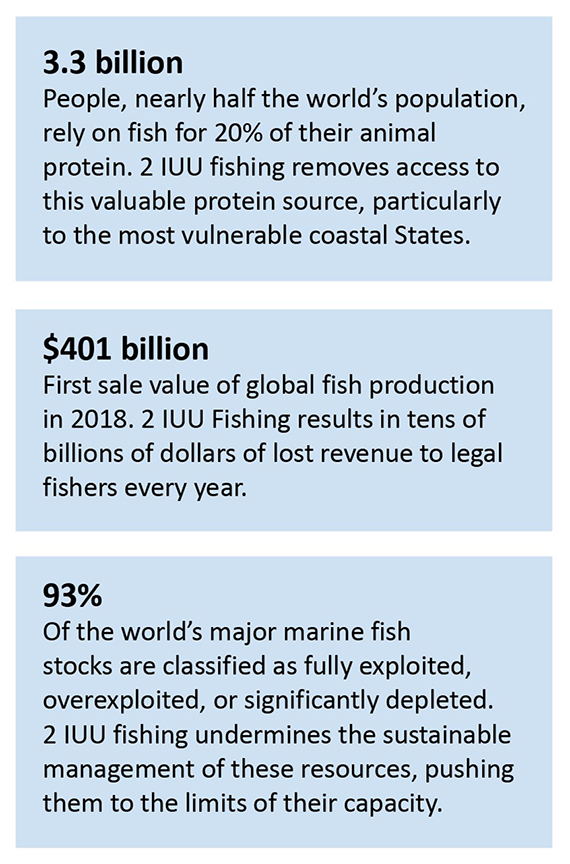 The sustainable harvest of these resources is directly linked to economic security — both for the U.S. and for nations around the globe, many of whom rely on revenue from fish for substantial portions of their gross domestic product. However, today the world’s fish stocks are under stress not only from growing consumption demand and changing ecosystems, but also from deliberate efforts to exploit gaps in existing governance structures. Illegal transshipment operations, heavily subsidized distant water fishing fleets, and nations who choose to systematically engage in IUU fishing amplify these stressors and catalyze additional criminal activity which further undermines maritime rules-based order. This cycle of destabilization has global reach, threatening the national security of countries worldwide.

With today’s interconnected fisheries and seafood markets, combating IUU fishing requires coordinated global action. The United States, as both a major consumer and a major producer of seafood products, must continue to lead efforts to neutralize the IUU fishing threat.

IUU Fishing – a pervasive security, economic, and environmental threat
The opaque nature of IUU fishing makes it difficult to quantify its full economic impact. According to the United Nations Food and Agriculture Organization, between 11 and 26 million metric tons of fish are caught illegally each year. By avoiding the operational costs associated with sustainable fishing practices, fishers, companies, and nations that engage in IUU fishing receive economic benefit over legitimate actors by exceeding harvesting limits and disregarding other conservation and management measures. As a result, law-abiding U.S. fishers and seafood industries are disadvantaged when illegally caught products enter the marketplace.4 Globally, economic losses from IUU fishing are difficult to quantify, but there is little disagreement that it is in the billions, or even tens of billions, of U.S. dollars each year, disproportionally impacting some of the poorest countries in the world.

IUU fishing practices not only undermine the economic prosperity of lawful fishers today; they also rob future generations of fishers of their livelihood by putting fish stocks at greater risk of collapse. IUU fishing erodes the validity of rules and arrangements made through Regional Fisheries Management Organizations and other international forums that seek to sustainably and equitably manage fish harvests among member nations.

Undocumented harvests from IUU fishing weaken these legitimate agreements and place undue strain on important fish stocks. Illegal fishing methods and gear used by IUU fishing perpetrators can also destroy habitats and result in excessive and wasteful bycatch. These practices destroy not only the resource today, but also its ability to be sustainably harvested for years and decades to come. Left without alternatives, these conditions entice more and more fishers to seek alternative sources of income such as piracy, drug trafficking, and human trafficking, creating a dangerous downward cycle furthering regional instability.

Systemic disregard of IUU fishing normalizes illegal behavior and erodes governance structures that foster peace and stability. In these ways, IUU fishing is a destabilizing threat to our collective global security and prosperity.

Status of global fish stocks
Today, fish stocks are under severe pressure. The 2020 FAO State of the World Fisheries and Aquaculture estimated that 96 million metric tons of fish were harvested in 2018. While this volume of global capture fisheries production has remained relatively consistent for the past 30 years, the worldwide fraction of fish stocks being harvested within sustainable levels has decreased significantly. Today, 93% of the world’s major marine fish stocks are classified as either fully exploited, overexploited, or significantly depleted.

Changes in global ocean conditions are also expected to affect total fish catch potential over the next decade.

Projections of the degree of impact vary geographically. In the Arctic Region, changing ice conditions are enabling expanded economic activity, including commercial fisheries, in areas where they had not previously been possible.

Fish stocks are expected to continue to shift northward, creating potential enforcement challenges to the current international prohibition on Arctic fishing. In tropical regions – where many countries are highly fisheries-dependent — more negative impacts to fish stock distributions are predicted over the coming decades. Countries vary widely in their national capacity to adapt to changes in where and how they collect their catch. Without the ability of industry to alter fishing practices and locations, and the ability of governments to support this transition, nations will be further challenged in their quest to secure food and livelihood for their citizens.

2 Food and Agriculture Organization of the United Nations. (2020). The State of World Fisheries and Aquaculture. Rome.