The real estate market 2021: It’s time to face the music 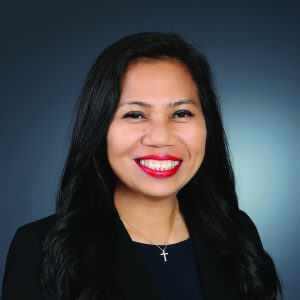 The pandemonium that is 2020 started off with a positive bang.

The 11% occupancy tax collections were up 5% and 10% in January and February, respectively.

Then activity came to a screeching halt for a prolonged period of time. Although real estate is a long-haul game, 2021 will be a challenging year.  Business closures, ceasing of rent and mortgage deferment, the end of the PUA program and other economic stimulus will all converge in 2021, pressuring the market to readjust. The approval of the second stimulus package will only delay the inevitable, and we’ll have to face the music.

Total real estate sales volume went down by 12% for the second year in a row to $383.8 million (annualized based on the first 11 months). As a matter of fact, the sales volume has been down for four consecutive years after the explosion in 2016 which includes the $125 million purchase of The Westin Resort Guam.

However, considering the pandemic, the decrease is relatively nominal and investors’ interest remains high in Guam. The median price for a single-family home skyrocketed to $325,000, up by 9% compared to 2019. This steady increase has been ongoing since 2014 (with the exception of 2017) and reflects a 62.5% total increase compared to 2013. That is an over 7% annual increase for seven years in a row.

The limited supply is the primary cause of this obscene increase. There is something that can be done for this — streamlining the process for permitting.  As shown on the graph, total new building permits in 2020 is only at 140 (annualized). An affordable housing crisis is likely to explode without intervention. 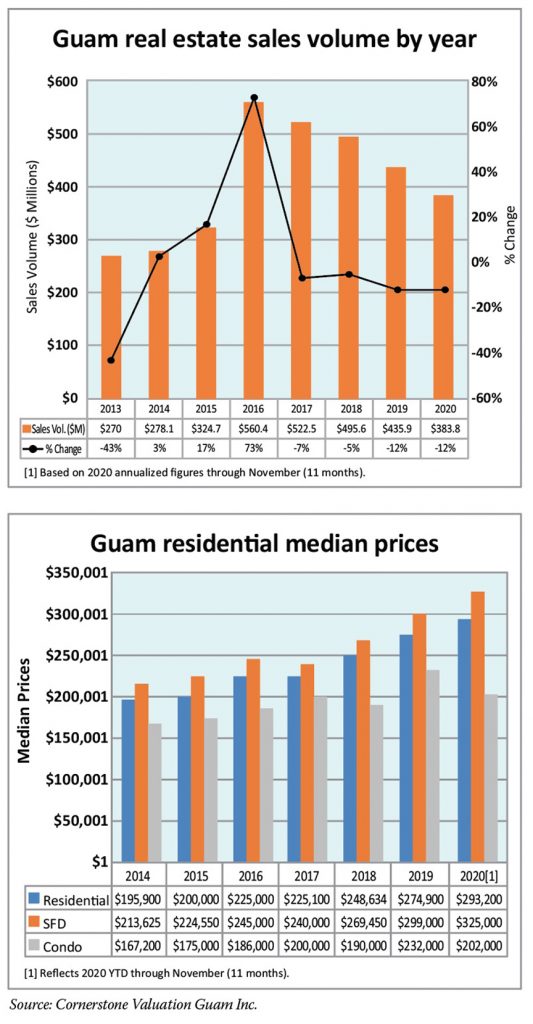 Is there a price decline in condominiums?  Not necessarily on a project-by-project basis, and it appears that the decline is primarily due to lower priced projects being sold.

The land sector reflects an 11.2% decline compare to 2019 in sales volume and a 19.4% drop in median prices. The decline can be attributed to the high construction costs, delaying the immediate development potential of land.  The 2021 NDAA would allow Guam to hire H2 workers from the Philippines, which is expected to ease the pressure. 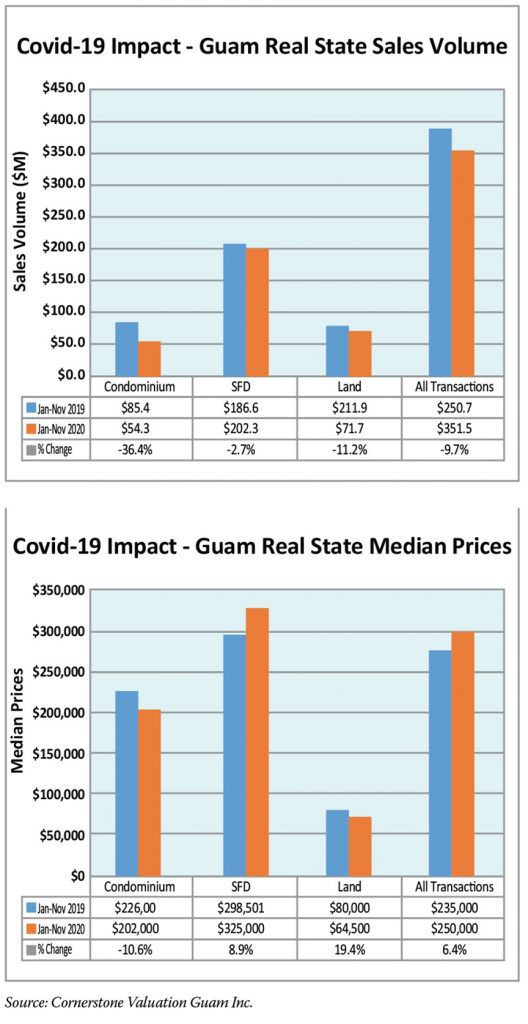 Despite the low interest rates, real estate lending took a hit during the pandemic. The strain of PPP and EIDL loans had most lending institutions on Guam working overtime and in overdrive during the second and third quarters of 2020. Total real estate lending in 2020 was down by 28% compared to 2019, down to $400.8 million from $556.0 million in 2019.

There are shifts in major players for lending. First Hawaiian Bank, which led the pack since 2017 went down by 75.3% from $173.2 million to $42.7 million. FHB came in fifth place after Bank of Hawaii, Bank of Guam, Pentagon FCU and Norwich Commercial Group (which only started fully in 2018). The 2021 real estate lending is expected to continue to be strong in residential and selective in commercial sectors. New financing vehicles are on the horizon and would be well received. 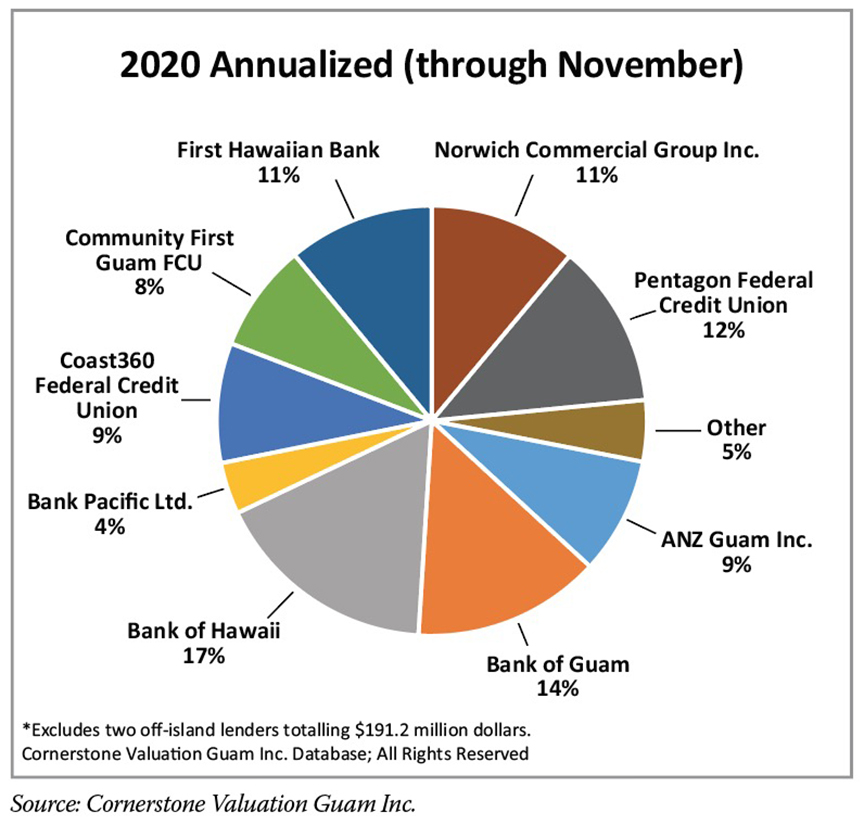 Notable transactions in Guam capture the strong military investment and the hope of the return of the tourism industry.

Right before the pandemic hit, nearly seven acres of Tumon beachfront land sold to a Taiwanese based investor planning to build a high-density resort development. Agat Inn on the Bay sold to a local investor who also recently acquired the former Accion Hotel and a 15-unit Agana Heights apartment building. The $5.2 million price tag includes a 62 units apartment with commercial spaces. Another 24-unit apartment in Mangilao was sold for $2.0 million to a local contractor for renovation and rental purposes. Another off-island military contractor acquired 14-unit condominium in Yigo at $1.89 million to house its employees. Three warehouses were sold to local companies at aggregate sale prices of $4.0 million. Nearly 40 acres of land along Route 15 was acquired by an off-island contractor who proposed to develop a gated housing subdivision.  The Superior Court of Guam is expanding and acquired the purple San Ramon building for $1.63 million. The famed Linda’s Coffee Shop building, a local staple since ever since, was sold for $1.1 million to an equally famous local investor.

I am in the middle of the testing design of an oceanfront apartment in Agat. It’s a complicated, time-consuming, and expensive adventure. Water pressure tests, soil tests, clearing permit, site layouts, setback from a high watermark among millions of other things.  I am building ARGUS cash flow analyses on it. My good friend who completed a similar project advised me against it. One of my advisory board members asked me if it is a crime of passion (his actual words won’t pass censure). Real estate development is not for the faint of heart, and that’s so true in Guam. Permitting issues, the Guam Land Use Commission board failing to meet due to lack of quorum, unclear procedures, and delays in occupancy permits all emphasize the notion that nothing is ever easy. It is sad to hear that the first developer on a project in Guam would likely fail, and the next (or the next next) gal who bought the project on bankruptcy or foreclosures would typically be the one getting the return on the investment.  So many people and stories. Things need to change.

My late husband Edward and I went to visit Israel in March 2017. One of the most interesting places we visited was the Cave of Pan, the god of which the word pandemonium was derived. It is located at the foot of Mount Hermon, north of the Golan Heights. Right down below the cave of the god of chaos is a spring, located in the water-deprived desert of Israel. The spring is the source of the Banias River, one of the main tributaries of the Jordan River.

The moral of the story is that the pandemic won’t last forever. Vaccines are being distributed as I’m writing this very article in late December. Real estate investment is a long haul, and investors create spaces and define the futures of Guam’s built environment.  Keep investing wisely and be well informed.