The man from the ministry 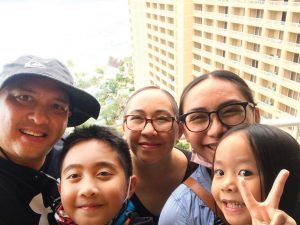 Ryan J. De Guzman’s family made their maiden voyage to Guam in 1978 — when he was a child, but only for a short period of time before they headed back to Los Angeles, Calif.

In 1988, De Guzman once again found himself exploring the beaches of the island until the turn of the millennium in 2002, when he left for college.

In 2005 island became his permanent home.

Since then, De Guzman has married, become a father of three (two girls and a boy) and begun and developed his career in real estate at Century 21 Commonwealth Realty, where he became a partner last year.

“I’d like to think I have four or five full-time jobs — I’m a husband to my wife, a father to my kids — and in addition to being a small-business partner in this corporation, I’m a working agent doing transactions myself,” De Guzman says.

In his time as a realtor on the island, he was named Guam Association of Realtors Realtor of the Year in 2008; served as GAR president in 2015; and on the local/territory board of directors as well as a committee/council member with the National Association of Realtors. He has also been asked to attend the NAR 2021 Leadership Academy class. The 11-month program is designed to prepare emerging state and local volunteers for future leadership positions at NAR.

For close to 30 years, De Guzman has grown his family and his business simultaneously, while still allowing time to enjoy himself and many of his passions, including ministry, in which he became licensed in 2001.

De Guzman is an associate pastor at Pacific Revival Center church in Dededo. His job at Pacific Revival entails prayer, preaching, bible studies, funeral arrangements, baby dedications, baptizing, marrying people — picking up trash, painting walls and anything else he can do to help, he says.

While ministry is in fact what De Guzman left the island to go to school for, when he got back on the shores of Guam, he realized while his heart was in ministry, he had to find another occupation for his wallet.

“I think the biggest aha moment was realizing after bible college, I needed to work my way into the workforce to actually make a living. Obviously, people don’t go into ministry to get rich,” he says.

He decided on real estate because he’s “always been into the sales part of the world,” noting that for the better part of his time on the island before he left for bible college, he was a tour guide for Pacific Micronesian Tours, shuttling tourists from the airport to their hotels and back again.

After finally passing the realtor exam on his third try, he decided on Century 21 Commonwealth because, “The guy that interviewed me seemed like a genuine kind of guy, someone I could trust. I looked him straight in the eye and asked him if he would mentor me and he said yes.”

With each different hat De Guzman puts on — real estate agent, business partner, father, husband, minister — he has a lot of responsibilities to juggle in his daily life. With this, he coined a system he calls WIN, or “What’s Important Now”.

“Whether it’s on the ministry side, at work and on the job, or at home, I just juggle it by just handling what’s important,” he says.

Whether he’s showing properties, helping to run Century 21 Commonwealth Realty, spending time with his family or providing island residents with spiritual guidance, his motto is, “Enjoy the ride; it’s filled with ups and downs, but you have to just enjoy the ride.”

Hobbies: Gym, basketball with friends from Harvest Christian School, paddle-boarding with my wife and surfing with my son.
Favorite coffee order: Extra hot chai latte with soy milk.
Who he’d like to meet: President Donald J. Trump
Favorite book: The Holy Bible. (In a variety of versions and translations, of course.)