The aviator: not just a job, but a way of life 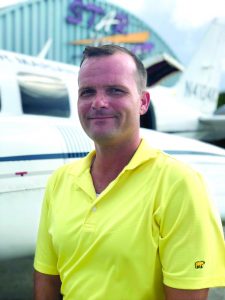 Flying is in Shaun Christian’s blood.

“My mother was taking flight lessons when she was pregnant with me, so I was flying before I was born,” he says.

His father Robert, also a pilot, came from Hawaii to bring Maui Airlines to Saipan in 1985 and started the commuter airline Pacific Island Aviation in 1988.

“He’s been in this industry for a very long time and has a sense of ethics in business that has really shaped my view of things,” Christian says, describing his father’s influence. “He has a general philosophy that says, yes, businesses are businesses and we’re not charities, but we also need to help the community and create the greatest benefits for the greatest amount of people.”

With aviation running so deeply in his family, it’s no surprise that flying would become one of the defining features of his life. Of course, he would need a proper education before he could take to the air, and as his academic career shows, he was in a hurry to get there.

Advanced in school, Christian attended Northern Marianas Academy, which allowed him to take high school classes as well as college classes at Northern Marianas College. He skipped eighth grade, took two summer semesters and was able to graduate early in 1994, earning both his high school diploma and an associate’s degree from NMC. He was accepted as a junior at the University of Washington at the age of 16, earning a bachelor’s in marketing two years later. Christian then returned to the aviation field and earned an associate’s in aeronautical maintenance technology from South Seattle College.

After college, Christian rejoined his father in both the NMI and the aviation industry, which would result in the two travelling the world together. 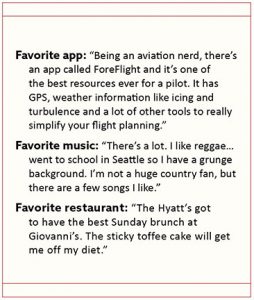 “My dad was taking on projects around the world and Pacific Island Aviation attracted a lot of interest because it was a U.S. flagged airline,” he says. Those international projects would find them setting up shop in Soviet Georgia — a venture that would end prematurely due to a revolution — and northern Iraq.

A request from the Tinian Dynasty Hotel and Casino in 2008 to assist with air travel for tourists brought the father and son duo back to the islands. That year Star Marianas Air was founded and it became certified by the Federal Aviation Administration and had its first flight in April 2009. Today, Christian is president of Star Marianas Air and his father Robert serves as board chairman and director of flight operations.

“It’s a rewarding industry to be in — we can see there are tangible benefits that aviation brings to the community here,” Christian says. “You could easily restrict supply and jack up the price and get a good personal profit — which doesn’t really help the economy — or you can do what we do, which is try to provide a service at a lower price to help the community.”

Aviation is such a part of his life that Christian says he applies many of its principles to life outside the cockpit.

“A lot of what we do in aviation has to do with assessment of risk and trying to put in processes and procedures that mitigate it down to low as is reasonably practicable,” he says. “Everything in life has a certain amount of risk — the only way to completely avoid risk is to never get out of bed. But if the risk is tolerable, then accept it and look at other areas where you can reduce risk.”

Aside from spending time with his children, Christian says he doesn’t really have too many interests outside of flying.

“I spend as much time with my kids as I can and I’m constantly working to increase my piloting ratings, so sometimes I’ll take my daughter out to fly at night because I need more night hours,” he says. “I can’t say I have a particular hobby. I love my industry so much I’m here [at work] even on my days off.”