Telecommunication industry benefits from the fruit of competition 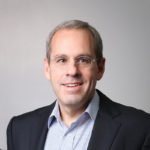 Conversations with Guam’s telecommunication companies lead to a singular conclusion: the telecommunications industry here has a crowded market, but it’s still looking to grow past the boundaries.

With four cellular operating networks and another company specializing in landline services, Guam’s population of approximately 165,000 people has more than enough connectivity through phone and internet service providers.

Though the companies chose not to reveal the size of their customer bases to Guam Business Magazine, the Public Utilities Commission’s E-911 surcharge summary reports provide a glimpse of just how many landline and mobile connections there are on the island. The latest report, for fiscal 2016, shows that the $1 surcharge was placed on 1,712,120 postpaid lines and 503,870 lines, with 28,671 lines exempted from the surcharge. 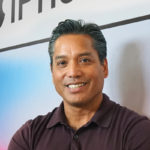 “A population of this size would be good with just one or two mobile networks. We have four,” says Jonathan Kriegel, outgoing president and CEO of Docomo Pacific. Kriegel will leave the company in July to hold a position within mother company NTT Docomo.

His words echo among others in the industry, each with a unanimous notion that the telecommunication market is fiercely competitive. Competition benefits the customers because each company strives to put together better deals, services and technologies to entice them. By doing so, Guam’s telecommunication industry advances at a quicker pace, following larger markets in the United States, Japan and South Korea fairly closely. 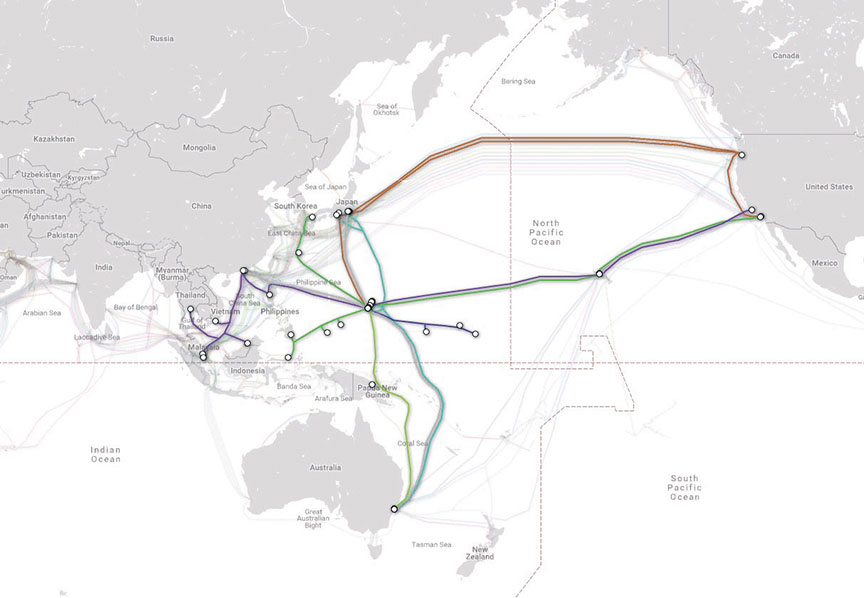 A map of Guam’s submarine cables shows a total of 12 lines connecting the island from East Asia to the western coast of the United States. Nine of the 12 are operational and the remaining three are expected to be completed by the end of 2019.
Photo courtesy of Telegeography via www.submarinecablemaps.com 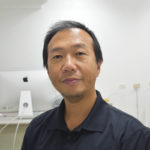 Docomo Pacific, GTA TeleGuam and IT&E often go head-to-head with their services, and each company always has at least one new service or product to share each year. Docomo Pacific began work on building a Tier 3 data center that would be open for local and off-island businesses to connect to, and is expected to open in early 2019. GTA is set to open a flagship store in the Camacho Landmark Building in Tamuning by the end of the year. IT&E in late April announced its rebranding from “Life in Motion” to “Explore Your World” and is expected to roll out a customizable broadband television streaming service over the summer. 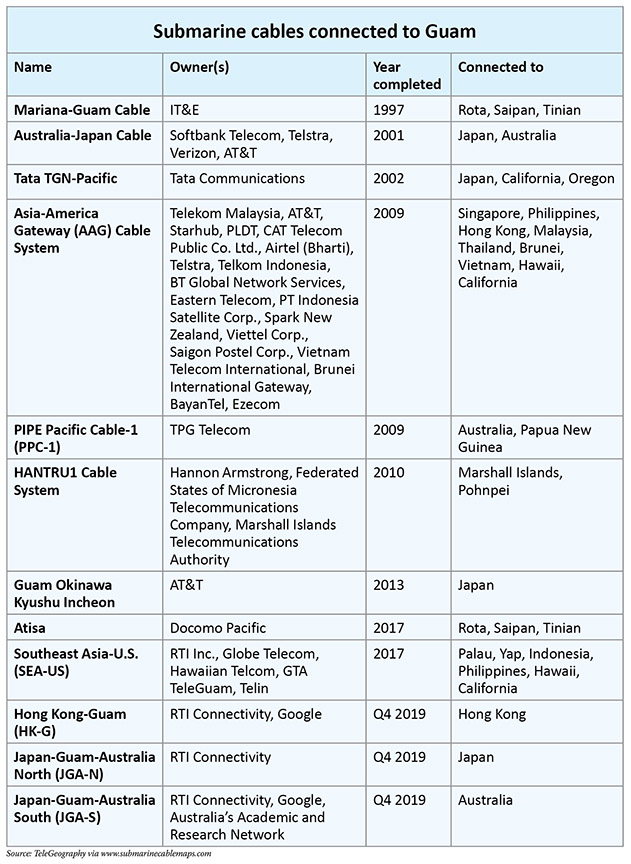 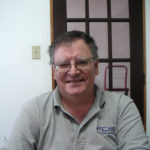 James I. Oehlerking, CEO of Pacific Telecom Inc., which does business as IT&E, says “the better you make the service, the more people will utilize it.”

In terms of expanding, IT&E already leads the Northern Mariana Islands market in both fixed and wireless networks, Oehlerking says. However, Docomo Pacific last June completed its Atisa submarine cable connecting Guam to the NMI, making it more viable to compete against IT&E. GTA may not have plans anytime soon to move outside of Guam, but Certeza says the company is actively expanding its cable station facilities to accommodate more cables at the Piti Cable Landing Station. 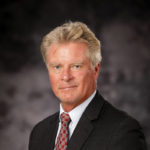 Amid the contest for the biggest customer base, the companies in one way or another assist each other. Pacific Data Systems, a landline network and internet service provider, uses different parts of GTA’s network through leasing to connect its clients. Docomo Pacific will open its data center to other telecommunication companies as well. Rene C. Lao, chief financial officer of ChoicePhone LLC, which does business as iConnect, says iConnect does not have any submarine cables, so it uses GTA’s and IT&E’s cables for long-distance networking.

“Somehow, we have found a way to harmoniously exist,” Lao says.

iConnect is known for its iconic Push-To-Talk voice and messaging service, a concept based off of Motorola’s Integrated Digital Enhanced Network. At one point, between 2002 and 2003 when Guam was hit with Typhoons Chata’an and Pongsona, the local government prioritized iConnect’s needs for fuel because its system was still operational after the devastation.

Nowadays, iConnect has a “respectable market” as customers look toward smart devices, according to Lao. The company has adapted with the latest trends by offering 4G LTE mobile Wi-Fi and opting for a faster HSPA+ Network over its previous GSM Network. However, it is sticking with its Push-To-Talk service because of its popularity with construction companies, tour operators, taxi companies and even school aides.

Wireless network expansions are on the rise, but landline services do not seem to be disappearing anytime soon, as GTA, Docomo Pacific and Pacific Data Systems supply such technologies. John D. Day, president and chief operating officer of Pacific Data Systems, says with the crowded mobile carrier market, the company does not see a need to jump in.

“The market will continue to be competitive, but I wouldn’t be surprised if in the next two years there will be some consolidation,” Day says. It’s also highly unlikely that off-island carriers like Verizon and AT&T would set up shop on Guam unless they were to purchase one of the companies here, he says.

Given the range of services for the island’s population, Day says at this point, companies are “trading customers” as residents move from one carrier to another whenever one company offers a new kind of product or service. Companies are beginning to look outward to the Micronesia region and beyond.

Instead of taking on the busy market, Pacific Data Systems finds its best work in traditional landline and voice services, internet connectivity and data networks for enterprise businesses and government agencies on Guam, the Northern Mariana Islands, Hawaii and Los Angeles. Its exclusive clientele gives the company a reason to continue its route, at the same time enhancing its services with the latest technologies.

Preparing an IT ecosystem

The state of Guam’s technology for wireless and fixed networks is ripe enough for telecommunications to, as Kriegel says, create an information technology ecosystem.

“Many of the high IT positions are staffed by individuals from off-island. Why?” Kriegel says. “These are high-paying, sustainable jobs. … There’s really an opportunity, but it starts with an educated workforce.”

Docomo Pacific has been working closely with the University of Guam, Guam Community College and the Guam Department of Education to help generate interest in the industry. Coding should be a regular class for students, Kriegel says, because just about all job industries require some degree of software development and engineering to operate. Equipping students with these skills early could provide a boost in the progression of Guam’s telecommunication systems, he says.

It is also fortunate that Guam is well connected in the Asia-Pacific region, Kriegel says. There are nine submarine cables that connect Guam with Asia, Australia and the west coast of the United States. Three more cables will be completed by the fourth quarter of 2019, providing an even faster connectivity speed for Guam.

On the upbeat of its rebranding, IT&E aims for a 100% increase in its data network trafficking and is repackaging its services for a more customer personalized experience, Oehlerking says.

GTA is expanding its Fiber to the Neighborhood service, using fiber optics to enhance internet speeds up to 50 megabits per second in the residential and business communities by village. With the August 2017 completion of the SEA-US cable, of which GTA is a co-owner, the company’s reach extends to Indonesia, Yap, the Philippines, Palau, Hawaii and California.

The niche companies also see expansions on the horizon. iConnect, which currently is connected from Andersen Air Force Base to Naval Base Guam, is looking to bring more of its services to the south, Lao says. Day says most of Pacific Data Systems’ local clients are in Tamuning and Hagåtña, and the company would like to build its clientele further north and south of the central area.

Moving forward, the telecommunication companies eagerly anticipate 5G capabilities — the latest in advanced wireless technology. This could be a game changer for the local market, Lao says, especially for new long-distance networking opportunities.

“It’s an opportune stage, especially for the Guam scene. We’re waiting for a lot of developments,” Lao says.

The companies are keeping quiet on their new products and services as a result of the 5G network, though Lao hints at new ways customers can engage with smart technology. This includes accessing home appliances, security cameras and other electronic devices through the internet.

Larger telecommunication companies have been testing the new generation of wireless technology, and the local companies say Guam could be immersed with it as soon as 2020. If it is as they say, the companies would have a few years to adapt to the new technologies by the time some 5,000 Marines and their families relocate from Okinawa to Guam.

In general, local telecommunication experts agree that the move will be beneficial to the market.

Day expects the market to grow between 10% and 20% in a three- to five-year period with the increase in subscribers. It may not be a huge change, but any growth of that nature is good for the market, he says.

iConnect welcomes the buildup as well and has phone plans in place to market to that demographic, Lao says. One plan allows up to 1,000 free minutes to make calls to the United States while another appeals to H-2B visa workers from the Philippines, with 90 free minutes for long-distance calls. 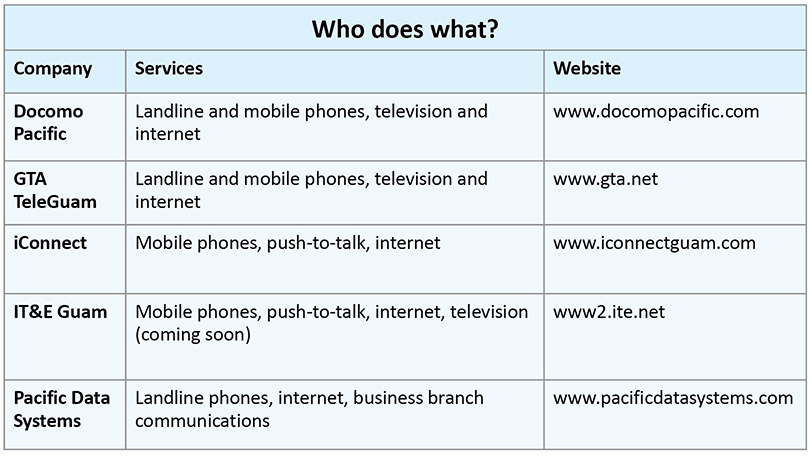 As internet service providers, the companies reassured that the latest developments with net neutrality, enacted during former President Barack Obama’s administration and repealed in December 2017, will not directly or immediately impact the local community.

“Fundamentally, I think trying to control and manage the internet is a losing proposition. … It’s too ubiquitous of a communication vehicle to try and control or manage,” Oehlerking says.

Kriegel says Docomo Pacific is of the mind “to not find ourselves in a situation where we would throttle data. We want to provide open access to all content for the benefit of our customers.”

The public shouldn’t worry too much about how this would affect Guam, Lao says. The repeal would mainly affect the larger broadband companies, and Guam residents may only see a change in the services they’re subscribed to, such as Netflix.

Day says we may see broadband companies teaming with other businesses to prioritize their services, but the Guam market is not at a level to team with those companies.

“In the long term, it won’t have a tremendous effect. The internet adapts. I don’t think it will be controlled,” he says.