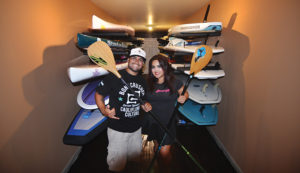 (depending on the tide), Monday – Saturday 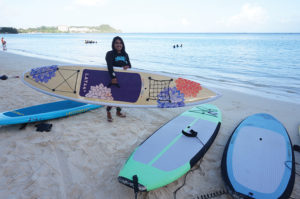 When Jonte DeLeon took her friend’s paddleboard out for a spin for the first time eight years ago, she had no idea she was about to discover one of her life’s passions. The moment she got on, she instantly fell in love with it. DeLeon is the founder and owner of SUP Shack Guam, a small standup paddleboard, or SUP, store, which she runs out of a 40-foot container.

She also obtained a permit this year to rent out paddleboards from a pop-up canopy on Matapang Beach. Renters receive instruction on how to use the boards and get a chance for a photo opp with DeLeon’s fluffy dog. 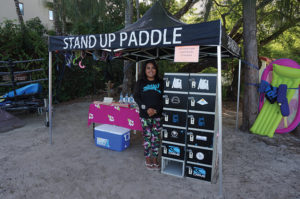 DeLeon is a member of the Coral Conservation Program; she sets up a boundary in the water to keeps her customers, her boards and the reef safe. “When you paddle over coral, you can damage the coral and the board,” she says.

Besides paddleboards, DeLeon’s rental service features lockers, which she rents for $1 an hour, and snorkel gear. With cash or credit card, the SUPs can be rented for $10 per hour, one-third of competing SUP rental fees, she says.

“I’ve been seeing couples doing dates and families having outings on the weekdays. … That is the reason why I do what I do,” DeLeon says.

What inspired you to go into business?

I was gearing up to take over my mother [Gilda Espaldon]’s salon. I’d gone to cosmetology school and managed her business for about 14 years. But then I fell in love with paddleboarding. I started the SUP Guam organization to see where the trend was going. When I finally purchased my own board from my [now] competitor company, I discussed taking over his business because he was in the Navy. But the owner decided to pass his business on to other military families. That set a different course for me. I was discouraged because I had spent a year preparing to take over his business. I wasn’t sure how to compete with them. But my husband told me, “You’re kind of an icon in the SUP community. People will follow. Start small, and then just do it.” It worked, and I was able to quit my day job.

How competitive is the market for SUP equipment in Guam?

Competition is fierce because I sell a product that isn’t sold every day. There are three other companies who sell SUPs, and then you get people who sell custom-made boards. To date, I’ve sold about 210 boards in two and a half years, so that’s not bad.

Does your store sell any products or brands exclusively for Guam?

This January, I launched my own line of paddleboards. I worked with a local artist, Kie Susuic. Last November, my husband and I flew to China and met with a company that did paddleboard productions for a lot of U.S. brands. We took Kie’s art and we put them on the boards, and we designed every single aspect of those limited edition paddleboards. So far, we’ve launched three different designs: The Hale’ board, which has a latte stone design, with the roots of the latte stone wrapping around the board; the Mames board, which has a girl blowing the kulu shell on top and grass and stars on the bottom, with the stars representing the Marianas Archipelago — we bought the rights to those designs. The third board is my pride and joy because it’s a piece that the artist and I collaborated on. It’s called the Gamson board, which means “octopus” in Chamorro. That board actually displays the coral-bleaching problem, and that’s why I love it.

Where do you source your merchandise?

It took a lot of research to figure out what I should carry, how many boards I’d need to get so I wouldn’t lose distribution rights, shipping logistics… I was able to lock in being the exclusive retailer on Guam, Rota, Saipan, Tinian, Palau, Majuro, Kosrae, and even some rights in Japan and Hawaii, for the brands Stand On Liquid, Latitude 44, BOTE, Boardworks and RRD.

How would you describe your customer base?

It’s majority locals and some military. But I do get a lot tourists.

What is your most popular product?

What has been your biggest challenge as a small-business owner?

My store is open only at night because I do the rental during the day. It’s very small. Sales go up and down is because I bring in batches of boards at a time. We’re constantly mixing things up so that there’s something for everybody. It was hard at first, because there’s no job security with my store. But that’s why the rentals work out well. I knew I was going to have people who needed extra convincing to make an investment, and I needed them to see the lifestyle of paddleboarding and how fun it is [through renting one first].

What has been your proudest moment in owning this store?

My proudest moment was when we did our second year of Stand Up for Autism. We hosted kids and their families for a day of fun and paddleboarding. My SUP group helped facilitate the event. One of the kids was just sitting on the board with this blissful look on his face, and he and his parents literally stayed in the water for six hours because he was having so much fun. I caught a picture of another boy jumping off a paddleboard, and as he was landing in the water, he had this big smile on his face. I loved seeing how happy the kids and the families were and seeing them bond with each other and the community. It wasn’t even about the autism. We really wanted the event to be from us to them.

What new products or changes can your customers look forward to in 2017?

We are looking at carrying Cham Glam, a lip balm that’s good for men and women who spend a lot of time on the beach. Another friend of mine is working on a Chamorro adult coloring book that has to do with the water, which we’ll be displaying at our store.