Harrison Cho: Shoot for the stars

When Harrison Cho, 54, started working in the Seoul hotel industry in the late 1980s, it didn’t take long for him to realize his ultimate goal: to become the general manager of a hotel. It did, however, take a little longer for him to actually achieve that dream — 27 and a half years to be exact.

“I thought it would happen a lot sooner,” Cho says.

It was Cho’s experience working the front desk of the Sheraton Grande Walkerhill hotel in Seoul during the 1988 Seoul Olympics that initially inspired this dream. A very friendly, sociable man, Cho enjoyed interacting with the high-profile hotel guests during the Olympics and thought he could transfer his knack for personal interaction to a management position.

Cho wasn’t the only one who saw his future potential. “I was really passionate and energetic about working in the hotel industry, and the management soon recognized this,” Cho says. As a result, Cho was sent to study for a master’s degree in international hotel management at the University of Surrey in England on a scholarship fully funded by the SK Group, which owned the Sheraton in Seoul during that time. “The fact that they invested in me made me even more excited to work in the industry,” he says.

About four or five years after completing his graduate studies in England, SK began restructuring in the wake of the late 1990s-era economic downturn in Korea, and Cho was sent to the SK Tokyo office to work in the sales and marketing side of the hotel industry. “It was the first time I’d worked overseas,” he says, “and it was a great experience. The Japanese hotel industry is the best, so this was an excellent opportunity.”

After moving from the Sheraton to the W Hotel Seoul in 2005, Cho was able to experience the global standard system of hotel management, which further broadened his opportunities in the hotel industry.

While at the W Hotel, Cho participated in the Starwood Hi-Potential Mentoring Program for GM Track from 2007 to 2008, which he points to as the third major turning point in his career. Cho was assigned Josef Dolp, vice president of operations for Starwood Asia Pacific Hotels & Resorts in Hong Kong, Taiwan, Macau and Korea, as his mentor during that time, whom Cho found very encouraging and inspiring. In fact, Cho had such a good experience with Dolp that he continues to pass on his knowledge and experience to his own mentees today.

In July 2015, Cho was finally able to realize his career goals when he was offered the position of general manager at The Westin Resort Guam.

“I believe that life is like riding a bike,” Cho says. “You have to keep moving forward to maintain balance, or else you’ll fall down.”

It’s no surprise that bike riding is one of Cho’s favorite activities, although since moving to Guam, he’s found it a bit too hot here to do. Instead, he’s picked up golf as his activity of choice, and on Saturday mornings he can often be found hitting the links with friends, then getting a good meal. Ever the social butterfly, Cho appreciates the friendly nature of the game. He also enjoys attending the many events put on at Guam’s various hotels.

Overall, Cho has enjoyed this past year on Guam. “The air here is cleaner, the scenery is beautiful and the sunsets are fantastic,” he says. “But what I love most are the people. They are so open, friendly and honest. Someone you’ve just met will start telling you all about their life. People in Korea tend not to share such personal things, especially with the people they work with.”

He’s also had some rewarding moments over the past year. “When we get […] good feedback from guests, or when I’ve seen people I’ve mentored go on to have success in the hotel industry, those are the things that are most rewarding for me in my career,” he says. 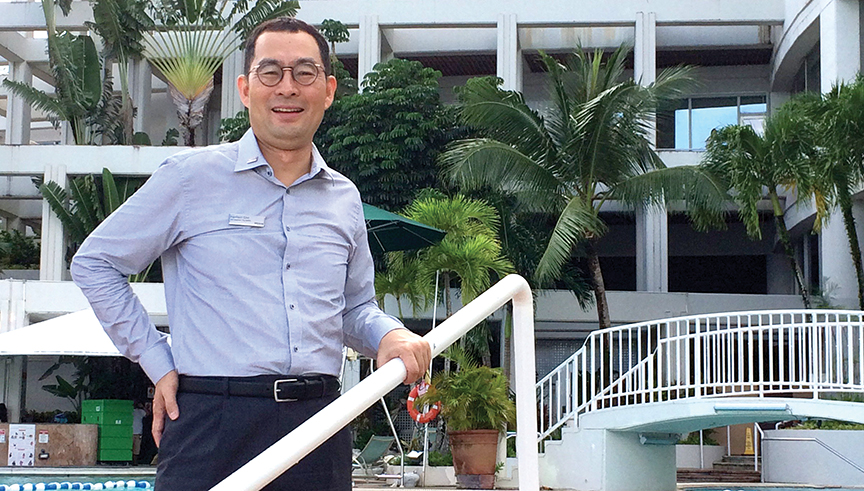