Riding the waves of life 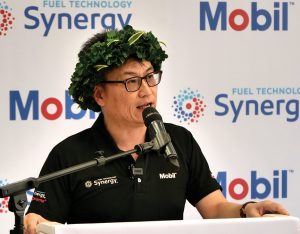 It was an early love of science and math that put Jimmy Tim Chau Hau on the path to his current position as president of Mobil Oil Guam Inc. That, and Legos.

“I had a strong interest in the sciences, but I also wanted a career where I could use a little creativity and also build things,” he says. “I liked to play with Legos when I was a kid, so maybe that has something to do with it.”

This interest in the creative application of science and math unsurprisingly led Hau to the field of engineering. He eventually settled on chemical engineering, for which he earned a bachelor’s from Salford University in Manchester, England, where he graduated with honors in 1990.

After earning his degree, Hau worked two early jobs in the petroleum industry before landing a job with Exxon Mobil Hong Kong Ltd., which would be the start of his career with the global oil and petroleum giant.

One of the benefits of working for such a large corporation, Hau says, is the abundance of opportunities to not only travel the world, but also travel within the organization itself, gaining a wide range of knowledge and experience, while taking on a variety of positions with different responsibilities.

“I came into Exxon Mobil as an engineer, and today I’m sort of like a commercial sales manager who’s also looking after the organization,” he says. “So even though I started off as a liquid petroleum gas engineer, I eventually moved on to sales — where I did retail sales and commercial sales — to the finance department, to economic analysis of investments, and other things. There’s a whole host of skills and opportunities within one organization.”

In his current position, he has been able to put all that knowledge and experience to use in unique ways on Guam, as well as the other islands in the region, such as the Northern Mariana Islands, the Federated States of Micronesia, Palau and the Marshall Islands.

“In these small markets, you really have to look at the whole thing, from sourcing the product, storage of the product, the terminals, all the way down to the marketing and sales at the end,” he says. “It’s really an all-encompassing job that needs a sort of all-around ability and knowledge.”

When he’s not working, Hau can be found playing badminton, table tennis or perhaps catching the latest superhero movie.

“I used to read a bit of Spiderman and the Avengers, so I like the Marvel and Avengers movies,” he says. “When I lived in Hong Kong I liked to read the martial arts comic books. Hong Kong didn’t have Spiderman and the Avengers, but there were a lot of martial arts related comic books and novels. They’re Chinese so their names are hard to translate, but one was called Dragon Tiger Gate.”

Hau and his wife Winnie have also taken up snorkeling, although they haven’t found a favorite spot yet.

“We’re just beginners, so we just like going to a nice quiet area to see a few fish; we’re just trying out the different areas,” he says. “Golf seems to be a popular sport here as well, so I’ve taken that up, although I’m still working on consistently hitting the ball.”

Whether at work or working on his golf game, Hau says he’s applying the same principles that have brought him to where he’s at today.

“I think honesty and integrity are core values within ExxonMobil, as well as to try your hardest and when you fail, to learn from failure,” he says. “Whether it’s at work or your life, there are waves — barriers — but you can’t just shy away and not set sail just because of the waves. You have to just set sail, take advantage of the winds, and ride those waves to get to your endpoint.”

Favorite book: “I’m a kid at heart, I guess, so I like the Harry Potter books.”
Favorite restaurant on Guam:  LA Korean BBQ and Tofu
Favorite coffee shop order: “I don’t drink that much coffee, but if I do get some, I’ll usually just order a latte.”
Favorite vacation spot: “My wife and I just love to go to Japan. We love the food, the culture and the great customer service there. Recently, we’ve gone on trips to Sapporo and Fukuoka, but we don’t really favor any one place there. We just like traveling around Japan and exploring different areas.”