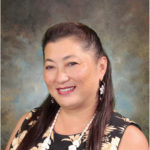 Having lived off-island for more than 31 years, Martha Hara fostered a renewed appreciation for Guam and its culture when she was part of a delegation that visited to celebrate Guam’s liberation day festivities in 2007.

During that trip, Hara met the late John Gerber, who owned the Pacific War Museum. Seeing his appreciation for the military created a new perspective for Hara about her home, the military and its significance in Guam’s history and her heritage.

“I have a totally new appreciation for those in the military service. … I’m Chamorro and Japanese. The two cultures were in battle and seeing that they are now at peace, and [Japan is] Guam’s number one source market, brings everything full circle,” Hara says. She found the opportunity to visit the island educational and fun, and soon relocated back. She has been living on Guam since.

Two years after arriving here, Hara became the president and owner of Discover Guam, which has been operating for more than 28 years as a locally owned and operated tour company that focuses on catering to independent travelers. What sets it apart from other tour companies in Guam is its private ownership, and its creation of customized tours for individuals and groups.

“It’s a personal service — we tailor our tours to fit our customers. We take customers to different sites and base it on their pace,” she says. Discover Guam has more than 30 employees in addition to hiring independent tour guides.

“These people [visitors] are wanting to know about the culture and what it means to be a local.” And that is what the company aims to accomplish. Discover Guam also takes last minute customers who just want to kill time during long layovers. The company can host a range of group sizes — from one traveler to a whole cruise ship.

The most popular tour package purchased is the four-hour World War II Tour, in which visitors are taken to the Piti Gun Trail, Asan Beach Park and other WWII historical areas around the island. Another popular purchase is the Island Discovery Tour, which takes visitors to scenic spots including Two Lovers Point, Latte Stone Park and the Plaza De Espana. Top customer markets include Japanese, Chinese, Koreans, Filipinos and Australians.

“I was an electronic engineer,” she says. When living in Texas, she designed defense guidance weapons, and worked with electro optics. She also worked in Las Vegas for many years, where she had multiple contracts to install audio and video components in establishments as a sound engineer. While there, Hara also held a part time marketing job in a casino. As what she calls a “modern day gypsy”, she delved into many different occupations concurrently.

In her spare time, Hara enjoys the island’s natural resources. “I love the water,” she says. She enjoys all the water sports that Guam offers including swimming, walking on the beach, parasailing and jet skiing.

“I’m learning about my island and my culture, and there’s always something new,” she says about her adventures.