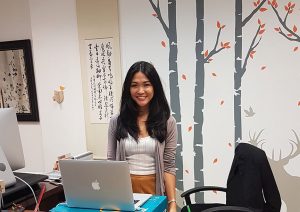 “I definitely believe in the power of positive thinking and manifestation,” Vanessa Villanueva, assistant marketing manager for International Dining Concepts LLC, says. “If you’re going to have something playing over and over in your head, it might as well be something positive, because what’s inside is going to come out.”

Villanueva’s attitude — and faith that things will work out if you just give it your best — has carried her through a career that spans from sales at Triple J Five Star Wholesale and Marianas Variety (now the Guam Daily Post) to marketing manager at Jamaican Grill to her current position.

“Sometimes the job seems impossible, but you can either stay stuck or say ‘Hey, time’s ticking,’ and get to work,” she says. “You’ll figure it out once you get the ball rolling.”

Born and raised on Guam, Villanueva is a 2006 graduate of Harvest Christian Academy, which she attended from elementary school through high school.

After high school, she attended college at Northland Baptist Bible College in Wisconsin before transferring to Pensacola Christian College in Florida, where she studied graphic design.

In 2011, she returned to Guam and began work at Triple J, which was her introduction to sales and the food industry on island.

“That’s actually how I got into contact with a lot of people in the restaurant industry,” she says. “I became familiar with a lot of the managers and it’s interesting how a lot of the contacts I made years ago have really come into play with my later career.”

Along with positivity and a good work ethic, Villanueva says other important traits for the marketing field are passion and authenticity.

“It’s fun because you just get to share what you’re passionate about with other people,” she says. “I feel like I’m kind of cheating because everyone’s interested in food.”

Villanueva believes in the importance of balance in life, and one of the ways she accomplishes that is with her second job.

“I dance for the dinner show at Pacific Islands Club, which helps to balance out all the food that I have to eat for this job,” she says. “If I didn’t have that job, I don’t know how many pounds I would’ve gained by now.”

She has worked at PIC since her time at Triple J, although she started there as a souvenir photographer.

“I always loved the shows and wondered what it would be like to dance,” she says. “Then one of the girls left and they asked me if I’d like to try out, because I would always tell them, ‘That looks like so much fun; you guys must love it.’ At first I told them no because I don’t have any experience, but they said they’d train me and I thought, ‘Why not?’”

When she’s not sharing her passions for food and dance, Villanueva can be found spending her down time practicing yoga, often under the tutelage of Jennifer McFerran. McFerran serves not only as her mentor in yoga, but also as her professional mentor as marketing manager for IDC. “I definitely see her as an industry role model,” she says. “The things she takes on, she’s definitely the definition of someone who goes after her passions hardcore, and it’s very inspiring to be around and work alongside her.”

Another mentor is Michael Hernandez, vice president of marketing and store operations for South Pacific Petroleum Corp., which does business as 76 Circle K.

“Michael Hernandez is a major mentor and inspiration for me in marketing and overall in life,” she says. “I feel like he should be a life guru or something.”

Villanueva says she believes in the importance of finding mentors and being open to learning at every stage of one’s career. “You really can’t stand alone,” she says. “You always have to be willing to ask questions of people you admire, that’s part of what got me here today.”

Positivity, work ethic, and being open to opportunities as they come have been the overarching themes of a life that Villanueva says has been in many ways, “Kind of random.”

“I feel like a lot of my life has been a series of fortunate coincidences,” she says. “Just be open to things, because what’s the worst that could happen? Even if you fail, at least you’ll know.”

Favorite app: Duo Lingo. It’s a language app that’s like a game, but it’s so beneficial.
Favorite tactic to destress at work: It’s amazing what getting fresh air will do. Just stepping outside the office for me is also like a visual thing. We’re so lucky to live on Guam and this office location has a balcony, so we have access to a view of the ocean and fresh air.
Favorite book: Harry Potter. I grew up waiting for each book to come out.
Favorite movie: You’ve Got Mail. For anyone who grew up in the 90s, it connects to them in a way that’s so special.
Little known fact about her: If could, I would spend all day playing Legend of Zelda.