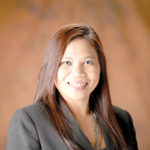 The 2017 Guam real estate transactions describe a lot about transitions happening in the market. Family businesses refocusing on what matters most, new renewable energy solution efforts, local businesses taking advantage of off island owner relocations, off island buyers making moves in land banking, changes in traveler’s profile and businesses making strategic moves in advance of changes to come. That change is the only constant in life seems to be the philosophy embraced by many real estate market participants. 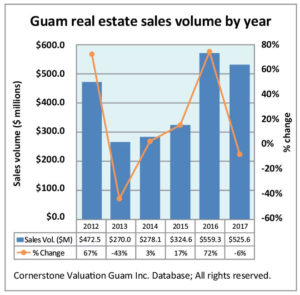 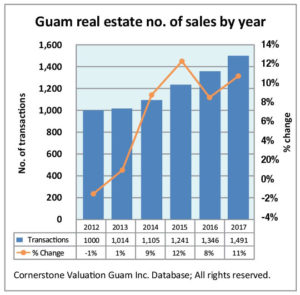 Total real estate sales volume decreased by 6% compared to 2016 at $525.6 million. Although it falls short, the 2017 sales volume still reflect a substantial increase compared to prior years and reflects general market cautious optimism. There is definitely a shortage in supply, with limited new construction coming into the market due to our H-2 worker labor issues. Various less attractive, older buildings are acquired for renovations, and we have seen many previously abandoned buildings rejuvenated and put back into their former glory. Hence, although there is a slight decrease in the sales volume, the number of transactions increased by 11% to 1,491 sales in 2017. The increase in the number of sales has continued its streak since 2013. With limited supply, price increase is inevitable and already happening. 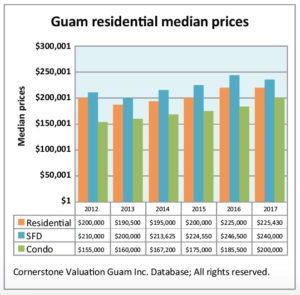 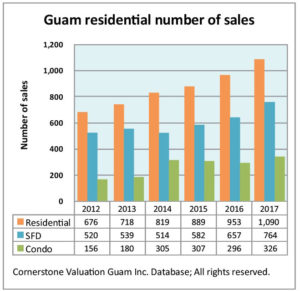 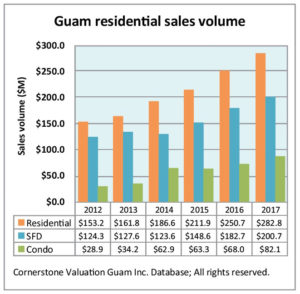 The residential sector certainly follows this trend. Sales volume increased to $282.8 million in 2017 from $250.7 million in 2016. The number of sales increased from 953 residential units to 1,090, a more than 14% increase. The lack of supply causing older, less attractive properties to be sold caused a decrease in median price of single family dwelling from $246,500 to $240,000 in 2017. Median price of condominiums continues the sharp increase from $185,500 to $200,000 in 2017. Overall, residential median price reflects $225,430. The reported U.S. Department of Housing and Urban Development Median Income for 2017 reflects $56,300 and increased 3% from 2016’s $54,400. At this median price, the Guam affordability index at 4.0 is considered moderately unaffordable and this is the challenge that a prospective homeowner will experience. We definitely would not want to have a Honolulu housing situation, where the index is at 9.4 — severely unaffordable — causing the exodus of local population to more affordable places. Hawaii attracts buyers from all over the world and the local buyers have to compete with the best of the best from all over the world with money to spare. Lack of affordable new supply already hit the prospective buyer hard. Then there is the curious case of Airbnb. Although reportedly there is no license yet issued due to lack of staff, more than 300 rentals are available in Guam if you go to the Airbnb website.

The apartment market sees various projects exchanging hand. The new single major operator is now officially Core Tech International Corp., after acquiring the more than 600-unit Tanota Rentals apartment and another nearly 100-unit Premier Apartments in Yigo. The construction labor scarcity put upward pressure on apartment prices. Two 14-unit almost identical apartment projects off of Route 3 in Dededo probably are best anecdotal examples of this. The first project sold at $890,000 in May 2017 while the second project sold for $1.45 million. The second project is in better condition and better occupancy (good management pays off), but the price pressure is definitely on. An off-island, military contractor acquired a 21-unit apartment in Yigo at $1.9 million, a new record price per unit for an apartment in the low-density development area of Yigo. Most buyers complete immediate renovations on the property, shifting the project to higher rental price brackets.

The residential rental market’s three market segments are shifting upward also. Cornerstone Valuation Guam research on various apartment projects (typically owner managed, not listed on Multiple Listing Service) reflects upward movement on both prices and occupancy for all locations. Housing cost is on the rise, as property owners/buyers complete renovations and increase rents as occupancy pushes upward. The majority of market leaders at a Cornerstone Power Breakfast held in December at the Dusit Thani Guam Resort agreed on the ripeness of the apartment market in our transitory island. The Guam Association of Realtors MLS recent statistics reflect this. It is noted that the MLS-listed properties are mostly in the military rental market as the rate reflects the Overseas Housing Allowance Rate. Competition in this market is steep, with the majority of new supply and renovation directed to this subsidized market. Risks include oversupply and changes in military housing policy. 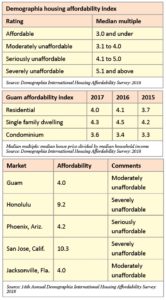 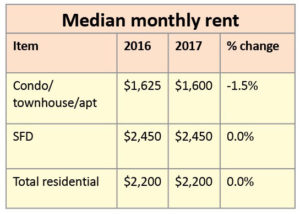 More and more supply of industrial land is created by the rezoning of former federal excess land, causing downward pressure on prices. Acres of new industrial land supply are created in south Tiyan with the rezoning of the land into M1-light industrial zone. These acres add to the previously rezoned Route 3 vicinity and several other pockets all over the island. The former federal excess land is a unique case of the inefficient market. Many landowners have to take care of probates and surveys, which are sometimes costly and take time. Buyers sometimes risk uncertainty of ownership rights and score on $50,000 per unit duplexes with ocean views. Knowledgeable land owners hire appraisers and title companies to avoid selling too low and so do buyers, to avoid buying too high. A few years back there was a famous transaction where a buyer scored a great deal buying former federal excess land and recieved a free 10,000 square feet of military concrete building just because the lawn was not mown and vegetation hid the building. The same buyer bought another piece site unseen, only to find that the purchase included mostly unusable steep cliff sites.

Tumon and Tamuning are still the most desirable locations. The recent record price of oceanfront land was on a 2,118 square meter Tumon Bay land by Fujita beach at nearly $1,900 per square meter, sold in December 2017.

Two large industrial facilities built by Hawaii-based military contractors based in the peak of the military buildup hype sold to local buyers in 2017. The sale includes the 4-acre former Commercial Plumbing concrete warehouse in the Bello Road vicinity and the former Alaka’i one acre with a quality warehouse in Harmon Industrial Park. Both facilities were built for owner occupancy, but the delay in the military buildup forced the companies to abandon their plans. An abandoned metal warehouse in Mamis Street Tamuning will finally get some much needed renovation after acquisition by a local construction company. The change in tourist profiles reduced the business activity by tour agencies, and a local tourist operator acquired the former headquarter of R&C Tours in Tumon for $5.2 million. The new Landmark Center near the International Trade Center building is leasing and is expected to bring up rents just like Dusit Thani did in hotel average room rates.

The Guam landscape is definitely changing, with local entrepreneurs putting their ducks in a row and off-island investors trying to position themselves to these changes, driven by strong tourism and the military buildup. Risks include the changes in tourism profile; the industry is shifting from a travel agent and Japanese dominated industry to free individual travelers who do not like to be packaged and have different spending patterns. The military buildup is closer than we think (yes, we’ve heard that before). Change is imminent, and proper assessment of risks and returns need to be carried out professionally to avoid taking the wrong route. 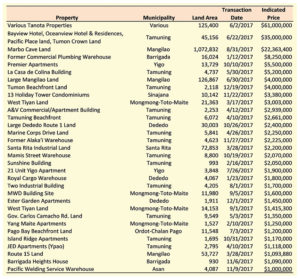