Christopher Hartig: On the air and over the waves

My family on both sides has always been entrepreneurial and adventurous. When people 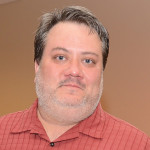 say, ‘Going from Alaska to Guam? That’s so weird!’ I always tell them that it’s just going from one frontier to another,” says Christopher Hartig, general manager of KPRG, Guam’s only public radio station.

“My family goes back three generations to the territorial days in Alaska,” Hartig says.

He was born and raised in Wasilla — “It’s ‘all I saw’ spelled backwards” — a small town outside of Anchorage. “They went out there to farm under the New Deal act, and at one point, my grandfather had the largest dairy farm in the state.”

Hartig spent his freshman year of college at the University of Alaska Fairbanks. Here, the criminal justice and political science major got his start as a deejay on a college radio station where “there was an eclectic group of individuals running everything. We broadcast out of the historic Student Union Building, where the treaty of Alaska was ratified.”

Hartig swears he got the job because he wrote on the application that he was a fan of the comedy show “WKRP in Cincinnati.”

From Fairbanks, Hartig transferred to the University of Northern Arizona, where he found a job as a live sound engineer for student recitals and concerts. In addition to gaining technical experience, Hartig worked alongside a number of interesting musicians.

“There’s a pretty well-known pianist named George Winston who played there, and he was one of the more eccentric ones. He wanted what I called ‘the Phantom of the Opera treatment,’ where we had to make the concert hall available between midnight and 4 a.m. so he could come in and practice, and then we were not to be seen while he was around,” Hartig says.

Following graduation, Hartig worked as a deejay in clubs and applied his degree working as a corrections officer. When his mother fell ill, he was called home to take care of the family remodeling business, Cabinet Showcase. Hartig learned the ins and outs of running a business, handling everything from purchasing to payroll.

“At this point, I had been on the air, was a member of NPR and had the business background,” Hartig says. When he moved to Guam in 2006, “that was exactly what the station [KPRG] was looking for.”

Hartig admits that it is difficult to separate his personal from his professional goals and is constantly looking at the schedule to design the best possible lineup.

“The biggest problem with KPRG is awareness and touching all of the different communities,” Hartig says. Compared to many mainland stations that opened in the 1960s, the 22-year-old radio station is relatively young, he says. “We probably have the only Chuukese language program on island, but it’s still hard to cover all the demographics.”

In addition to promoting local content, the station has brought out several national acts, including Gregg McVicar, host of “Undercurrents,” Suzanne Bona, host of “Sunday Baroque,” and looping sensation Kaweii.

While managing a radio station on Guam often means having to work on East Coast hours, Hartig says that playing the time-zone game from here can also have its perks, like the time he managed to reserve a table for Tickets, an esteemed restaurant in Barcelona with one of the most difficult reservation processes.

“You have to book at midnight on the day exactly two weeks before you are going to dine, and it sells out in minutes. But we have an advantage on Guam: [their] midnight is [our] 9 a.m,” Hartig says.

Having set up the radio station where it can be operated just as easily from his home in Ipan as his Airbnb rental in Barcelona, Hartig travels as often as he can but knows where he wants to be at the end of each trip.

“I love the station,” he says. “I’ve had opportunities to go somewhere else. I’ve been called by head hunters, but I love Guam and I’m proud of the community we’ve built around the radio station.”