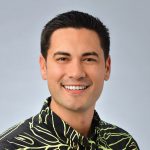 Kyle Shelly, a former resident of Guam, was selected for the list of top 40 under 40 executives by Pacific Business News. Shelly attended Father Duenas Memorial School for two years before completing high school in San Diego. He earned his undergraduate degree from San Diego State University.

Shelly worked at Bainbridge Capital and Bank of Hawaii before accepting a position at American Savings Bank in Honolulu, where he eventually became vice president and now holds the largest share of ASB’s merchant fee income in his portfolio. 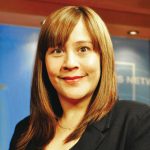 Marie Calvo-Monge was appointed CEO of the newly rebranded KUAM Communications. Calvo-Monge, who has 20 years managerial experience with the company, succeeds Joey Calvo, who will maintain his position as chairman of the company and move to an executive vice president position at Island Beverage Guam.Other changes to KUAM management include Eli Monge moving from chief marketing officer to operations manager, Betty Ann Guerrero moving to general sales manager and Sabrina Salas Matanane adding executive producer duties to her position as managing director. 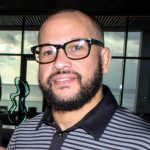 The stations and entities under Pacific Telestations LLC have been rebranded KUAM Communications as part of the company’s transition from a  broadcast media group to a multiplatform company that will include original digital content, a podcast network and streaming features as part of its offerings. The media entities under KUAM Communications include TV8, TV11, radio stations I94fm and Isla63fm, KUAM Productions, Uno Magazine and the KUAM Digital Content Studio.

Victor Osumi was named by Marriott International as area vice president of Japan and Guam on June 18. Osumi has about 30 years of experience in the hospitality industry that began in 1991 with Hyatt Resorts Hawaii after serving six years in the United States Air Force. He worked with Marriott International from 2002 to 2009 and then moved on to the Mandarin Oriental Group, the Intercontinental Hotel Group and the Prince Hotels and Resorts, where he worked as managing executive officer, chief sales officer and chief development officer before rejoining Marriott International. 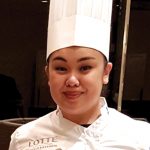 Jasmine Marie Nadres, a junior sous chef at the Lotte Hotel Guam, won the Continental Director’s Medal in the Global Young Chef’s Challenge during the Worldchefs Congress and Expo on July 14 in Kuala Lumpur, Malaysia. Nadres beat a field of contestants representing 10 other countries and is the first chef to represent Guam in the competition.

She graduated from the Guam Community College Culinary Academy in 2016 and was named “Up and Coming Chef of the Year” by the Guam Chapter of the American Culinary Federation during its inaugural Excellence in Culinary Arts and Restaurant Awards on May 5.

Dr. Phillip Tutnauer joined Guam Regional Medical City as an in-house podiatrist. Tutnauer comes to Guam from New Jersey were he practiced for more than 25 years. He is trained and experienced in treating all phases of podiatry, including foot and ankle injuries, sports injuries, arthritic issues, fungal issues and diabetic foot care as well as pediatric foot care.

GRMC also welcomed back Dr. Marian Holland, an electrophysiology cardiologist who served with GRMC prior to moving back to Texas two years ago. Dr. Holland continued working with GRMC remotely and returned for the summer to treat patients and conduct device management of cardiac implants, set up telemetry consultations and assist in the expansion of GRMC’s cardiology clinic. 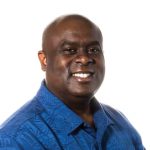 Richard Witt was named Hawaii District Manager for Honolulu Cookie Co. Witt began his retail career as a high school junior at Footlocker in Aiea where he was awarded Rookie Store Manager of the Year for Outstanding Sales Performance. He then moved to Lids, where he managed the Hawai’i District’s top-performing store in sales volume before being promoted to District Sales Manager for Hawaii. Witt also managed the Los Angeles and New York districts and ran the 40,000-square-foot Super Bowl XLVII NFL shop in New Orleans and earned the Lids District Sales Manager of the Year award for the entire company. 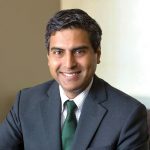 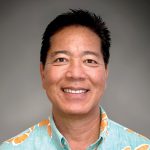 Mark K. Teruya was elected to serve on the First Hawaiian Bank board of directors. Teruya is CEO and chairman of Armstrong Produce Ltd., a family-run full-service wholesale produce distributor. Teruya also serves on the boards of the Rehabilitation Hospital of the Pacific Foundation, Hawaii Sports Hall of Fame and the Hawaii Food and Wine Festival.

Bank of Guam receieved the Corporate Social Responsibility of the Year, Silver Award, at the 2018 Asian Banking and Finance Retail Banking Awards on July 12 for its high school financial literacy programs and the 2017 Life Teen Expo.

More than 2,100 high school students throughout 16 schools on Guam, Saipan and Palau and five organizations have participated in “Mad City Money,” Bank of Guam’s high school financial simulation program, since it was launched in October 2016. Since 2004 the bank has also led the local “National Teach Children to Save” and “Get Smart About Credit” programs, which were developed by the American Bankers Association and target elementary to middle and high school students. 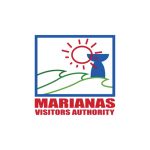 The Marianas Visitors Authority accepted the award for “Best Eagle Ray Watching Spot” on behalf of the Northern Mariana Islands at the 2018 Diving and Resort Travel Taiwan Expo, held from June 22 to June 24 in Taipei, Taiwan. The 2018 Expo attracted about 29,000 attendees.

The Marianas Visitors Authority’s “Official Marianas Guide” was awarded the 2018 Pacific Asia Travel Association Gold Award under the Education and Training category, according to a PATA announcement on July 18. The awards ceremony will take place in Langkawi, Malaysia on Sept. 14 during the 2018 PATA Travel Mart.

The Marianas Visitors Authority in partnership with Century Tours received the “Most Creative Booth Award” at the 2018 Beijing International Tourism Expo, which was held from June 15 to June 17. The booth included eight different travel themes and a virtual reality system.

The Guam Office of Public Accountability won the 2017 Knighton Award in the extra-large audit shop category for its audit report, “Department of Public Works Village Streets Management Strategy.” Audit Supervisor Llewelyn Terlaje and Audit Staff Christian Rivera accepted the award on behalf of the Guam OPA on May 7 at the Association of Local Government Auditors 30th Annual Conference, held in Colorado Springs, Colorado.

The Offices of Guam Homeland Security and Civil Defense were presented a Certificate of Recognition of the U.S. Territory of Guam as a StormReady and TsunamiReady Community by the National Weather Service, Guam on July 13.

The Guam Visitors Bureau announced July 30 that Guam was selected in the Chinese newspaper “People’s Daily” as one of the world’s safest destinations in 2018 for female travelers.

Guam was the top-ranked destination in the United States, beating Hawaii and California, and ranked fifth out of the top 20 destinations worldwide from a from a field that included Sri Lanka, Japan and Dubai.

The award for Guam was accepted by GVB during an awards ceremony for the top 20 destinations. The ceremony was held in June in Beijing and was organized by National Humanity History Magazine, Baidai Trip of the People’s Daily and the Chinese Feminine Culture Research Center.

The A.B. Won Pat International Airport was voted the most efficient airport under 10 million passengers in the Air Transport Research Society’s 2018 Global Airport Performance Benchmarking Report. The report was prepared by members of a task force from Canada, the United States, Australia, Japan, Hong Kong, the Netherlands, Germany and Isreal.

The airport was also nominated in June by the Federal Aviation Administration Western Pacific Region for the 2018 Airport Safety Award and the 2018 Outstanding Airport Award, making the top 7 and top 6 shortlists respectively.

The Guam Visitors Bureau and the Guam Hotel and Restaurant Association announced the 2018 Hospitality Employees Outstanding Awards winners at a ceremony held July 27 at the Hyatt Regency Guam. A total of 15 winners were selected across seven award categories.

The winners in each category were:

Rookie of the Year: 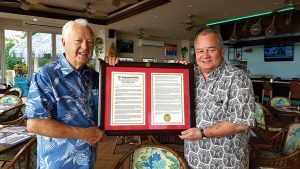 Robert H. Jones, chairman and CEO of Triple J Enterprises, was presented by Gregorio C. “Kilili” Sablan, the Northern Mariana Islands delegate to Congress, with a Congressional Record recognizing Jones, his wife Margaret A. Jones and their entire family for their contributions to the growth and development of the Northern Mariana Islands and the western Pacific through their business ventures and philanthropy. Robert was named 1983 Guam Business Magazine Executive of the Year and Margaret received the 2018 First Hawaiian Bank and Guam Business Magazine Businesswoman of the Year Lifetime Achievement Award in April. The Congressional Record is published by the United States Government Publishing Office. 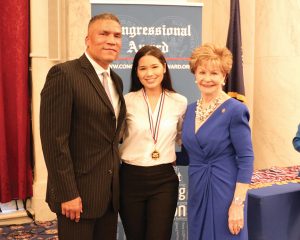 Photo courtesy of the office of Madeleine Z. Bordallo

Athena McNinch, a 2018 University of Guam graduate and intern at the Washington D.C. office of Madeleine Z. Bordallo, Guam’s delegate to Congress, received a Gold Medal Congressional Award on July 6 in Washington, D.C. McNinch was recognized for volunteering more than 800 hours of community service with numerous non-profit organizations. She is also a Truman Scholar. The Gold Medal is the highest Congressional Award. McNinch (center) is shown with Washington Nationals Owner Paxton Baker (left) and Bordallo. 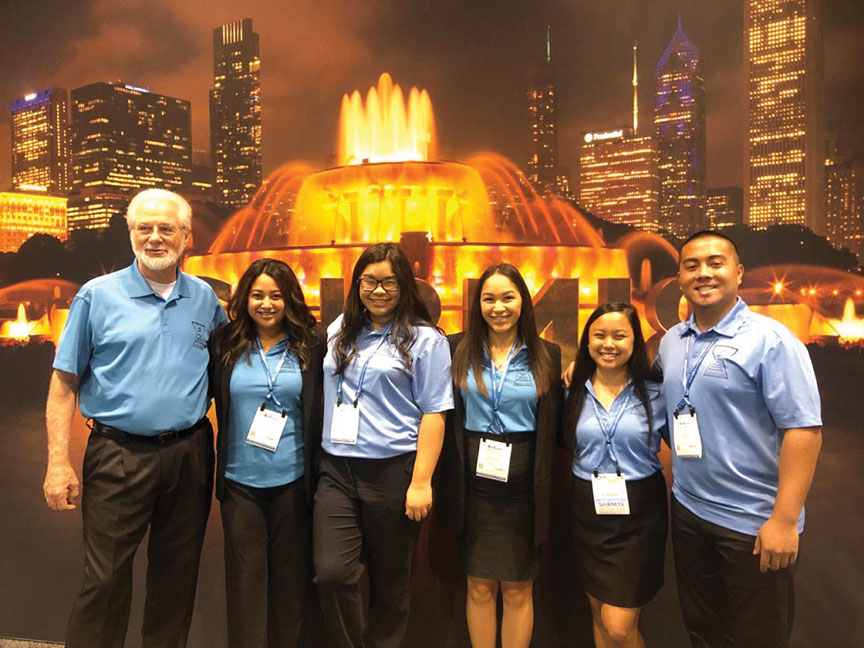 The University of Guam Society for Human Resource Management Student Chapter was recognized with the Superior Merit Award at the Society for Human Resources Management Annual Conference and Exposition held June 17 to June 20 in Chicago. This marks the UOG chapter’s 20th such award, which is the highest given by the national organization for an academic year, in the past 22 years.