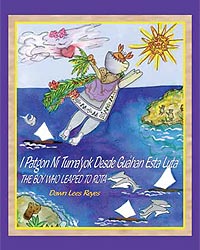 Local artist Dawn Lees Reyes has illustrated and written the first in a series of children’s books depicting Chamorro legends. The book, entitled “The Boy Who Leaped to Rota”, is written in both English and Chamorro, translated by L.T. Paulino. The artwork features “latte people” and tells the story of a young Chamorro boy in ancient times, whose physical strength attracted the jealousy of his father. Upcoming books will tell the story of the two lovers and Sirena.

Other individuals who contributed to the production of the book are Marilyn Salas, David Tydingco and Taliea Strohmeyer. The book was published by Everything Guam and became available in June. Reyes taught art in the Guam Public School System for seven years and has also been contracted by the Guam Regional Medical City to provide artwork for its pediatric ward.

The Marianas Variety Guam edition is now one of two newspapers on the island to be published seven days a week. The first-ever Saturday edition of the paper came out on May 24, and the firstever Sunday edition came out on May 25. The move also celebrates the paper’s 10th anniversary on Guam in October. 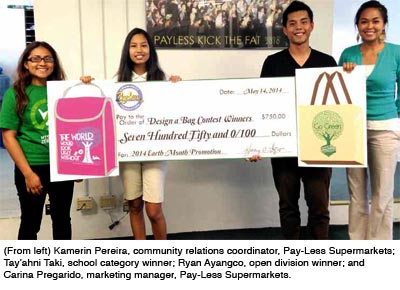 Pay-Less Supermarkets selected two winners for its 2014 Design-a-Bag contest held during Earth Month in April. Tay’ahni Taki won the school category, and Ryan Ayangco won the open category. For her winning design, Taki won $200 in cash, a $50 Pay-Less gift certificate and $100 toward a student or non-profit organization of her choice. Ayangco’s design won him $300 in cash and $100 in Pay-Less gift certificates. The winning designs will be featured on limited edition reusable bags starting in August. Taki’s design will be featured on lunch bags, and Ayangco’s design will be featured on reusable shopping bags.

The remains of a soldier who went missing in Saipan during World War II were returned to his family and laid to rest. The remains of Private 1st Class William T. Carneal, a U.S. Army soldier in the 105th Regiment, 127th Infantry Division were discovered in Saipan in 2013 by Kuentai, a Japanese nonprofit organization that searches for remains of Japanese soldiers killed in World War II. Carneal’s remains were found with several personal items, including his dog tags, a high school ring and American coins. DNA testing confirmed his identity. He was laid to rest in his hometown of Paducah, Ky., near other family members.

The remains arrived in his hometown on April 22, and memorial services were held on April 25, on what would have been his 94th birthday. Representatives from Japan, members of Kuentai and Kentucky government representatives attended the memorial.

A book describing the importance of sociology written by Thomas D. Sharts, a professor of sociology at Northern Marianas College, was published by XLBRIS in December 2013. The book, entitled “Avant-Garde Sociology,” focuses on seven areas that define social reality and describes how these areas can be used as a tool in sociological theory or understanding human behavior. Sharts’ book describes how sociology should be seen as a tool for identifying social problems, a tool for developing policies or programs to alleviate social maladies, understanding issues surrounding the operation of a business; and for highlighting the field’s role when studying and assessing the origins of many mental health illnesses.

The seven areas explored in the book are historical reality, social structural reality, cultural reality, economic reality, political reality, social institution reality and environmental reality. In addition, Sharts’ book underscores the importance of identifying five areas of being human that impact and explain individual human behavior and other behavioral actions found in other types of social structures and social structural relationships. Other topics in the book include methods of power utilized in social structure relationships; explanations for deviant behavior; and theoretical processes for understanding the evolution of social change. The book is available online on Amazon and on the XLBRIS website. Sharts has also authored “The American Deception,” published in 2007. 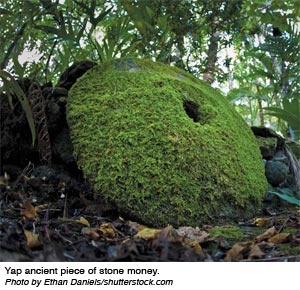 Yap State and Palau are working to nominate the site of stone money for the United Nations Educational, Scientific and Cultural Organization’s list of World Heritage Sites. The two communities hosted a regional workshop from April 7 to 11 in Colonia, Yap, to work on site management plans for the successful nomination of Yap’s stone money banks and dancing grounds. The particular site that Yap is planning to be nominated is the Mangyol site in Makiy Village, Gagil Municipality.