on July 1, 2019 | Leave a comment
Departments In the Spotlight

A scene includes a photo of Stan Lee, honoring the impact he had on the Marvel community. Also featured is the recently updated United livery displayed on the animated 787-10 aircraft. Most notably, Peter Parker’s best friend Ned, played by Jacob Batalon, shares a scene with United CEO Oscar Munoz.

Aircraft to fly with winning artwork this fall
Artists Tsungwei Moo and Corinne Antonelli of New Jersey won the United Airlines contest Her Art Here, which provides a chance to have their artwork painted on a Boeing 757 aircraft. The contest is a first of its kind and was open to anyone who identifies as female. The winners were selected through a combination of official judging and public voting.

Her Art Here hopes to change the reality that less than 13% of women artists are on display in museums, despite the fact that women make up 51% of today’s artists.

Marianas Ocean Tourism Ambassador films video
Marianas Ocean Tourism Ambassador Yorko Summer’s new underwater film and photography for the Marianas Visitors Authority will continue to build a dive focus for the Marianas. Summer filmed a promotional dive video in Saipan and Tinian from April 21 to April 28, that will be used at Diving Resort Travel in May and Asia Dive Expo in July.

With a great passion for protecting the marine environment, Summer is also listed in the top 100 underwater photographers in the world and is a regular speaker invited to major dive events. Summer shared on his Facebook page 10 posts from the Marianas, where he has 15,000 fans. 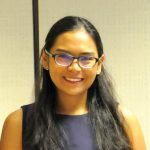 The award is one of the highest honors for young tourism professionals in the Asia Pacific region. The PATA release recognized Dela Cruz’s quest for sustainable tourism as a fit with the expectation of what an ideal destination and industry should aspire to become, as well as her willingness to step up and take recognition to this need, and to become part of the solution at a very young age.

As the 2019 PATA Face of the Future, Dela Cruz was one of the debaters at the United Nations World Tourism Organization/PATA Leaders Debate during the PATA Annual Summit 2019 from May 9 to May 12 in Cebu, Philippines. She will also be invited to join the 2019/2020 PATA Executive Board as a non-voting member and observer.

Dela Cruz was a four-year recipient of the Guam Business Magazine Businesswoman of the Year scholarship from 2014 to 2018 and is the youth representative on the Guam Visitors Bureau board of directors. She has an associate’s in liberal studies and travel and tourism management from Guam Community College and a 2018 bachelor’s in business administration with a concentration on marketing and international tourism and hospitality management from the University of Guam. 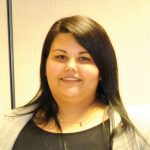 Freitas plans to continue her education to obtain a bachelor’s in accounting, with the ultimate goal of becoming a Certified Public Accountant.

She serves as a tutor at GCC’s Project Aim, the president for the Association of Junior Accountants, an active member of both the Phi Theta Kappa Honors Society and the American Association of University Women, and as a mother to her three-year-old son.

POI Aviation wins Quality First Award from United
The POI Aviation team was awarded the Quality First Award by United Airlines for the first quarter of 2019, presented to POI by United Airlines Saipan Station General Manager David Baker and Guam Airport Operations Manager Justin Marion on May 21. The award is given to the top performing business partner managed station. Saipan Station ranked number one out of sixty stations in the Asia Pacific region.

POI was also awarded the United Airlines Customer Satisfaction Award based on positive customer comments on how they were handled by a station for the months of January and March 2019.

Key points in the study include record-high customer satisfaction, improvement driven by traditional carriers, tech investments in reservation and check-in systems paying off, while in-flight service remains a
stumbling block.

Among traditional carriers, Alaska Airlines ranks highest for the 12th consecutive year, with a score of 801. Delta Air Lines (788) ranks second and American Airlines (764) ranks third. Among low-cost carriers, JetBlue Airways (817) and Southwest Airlines (817) rank highest in a tie. For Southwest, this is the third consecutive year at the top of the J.D. Power ranking.

The North America Airline Satisfaction Study, now in its 15th year, measures passenger satisfaction with airline carriers in North America among both business and leisure travelers and is based on responses from 5,966 passengers who flew on a major North American airline between March 2018 and March 2019. The study was fielded from April 2018 through March 2019. 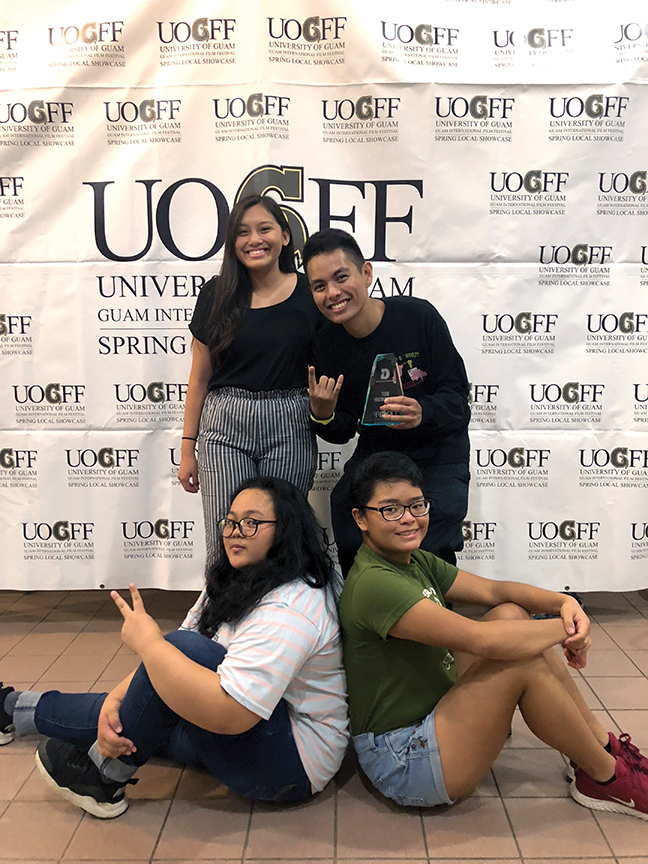 Photo courtesy of the University of Guam

UOG holds film festival
The Fifth Annual University of Guam Film Festival showcased films from students in UOG’s Communication Program and students in the Guam International Film Festival’s high school film club to an audience of 150 at the UOG Lecture Hall on May 10. Out of the 29 films submitted, six took home awards. The winners were for Best Twisted Trailer: “The Substitute” by Sierra Reyes; Best Mood Piece: “Speak” by Auston Dennis; Best Narrative: “Left on Read” by Keanno Fausto; Best Documentary: “Sumay: The Lost Village” by Sierra Reyes; 96-Hour Competition Winner: “From Now On” by Alyssa Dumlao and Ronald Fuellas; and 72-Hour Competition Winner: “National Crab Day” by Daven Fellisan and Joshua Dichoso. 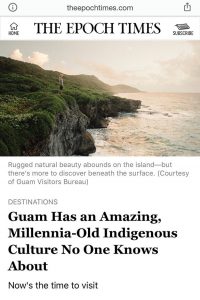 Global publications promote Guam tourism
Guam’s culture and landscape were highlighted in an article by the Epoch Times, which promoted the island as a backpacking destination. The piece titled, “Guam Has an Amazing, Millennia-Old Indigenous Culture No One Knows About,” encourages travelers to experience the flourishing CHamoru culture. Although the website acknowledges Guam’s “value as a strategic military outpost,” the article examines the island’s richer, sincerer beauties. Along with mentioning Guam’s Spanish era and WWII history, it also alluded to the ancient latte stones and the art of seafaring, representing the uniqueness and complexities of the CHamoru people. When suggesting things to do, Epoch spotlights the delicious barbeque of Chamorro Village, exploring the colorful coral and “boonie stomping” Guam’s jungles.

Guam’s 75th Liberation was also promoted in eTurbo News’ article “A piece of American history, ancient culture, white sandy beaches and so remote like no place else?” The piece mentioned Guam Flag Day which took place on May 12 and the 31st Micronesian Island Fair which took place from May 29 to June 1. The article paints Guam as a tropical paradise with “white-sand beaches with crystal-clear waters” and “some of the most spectacular sunsets in the world”. eTurbo also alludes to Guam’s high-end hotspots such as “luxury resorts” and “duty-free shopping malls.”