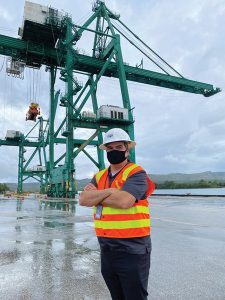 General Manager Rory J. Respicio says the port is pushing ahead with its modernization program and master plan update, not least of all by “by leveraging federal funding resources” and “working toward completing legislatively-approved capital improvement projects funded by its 2018 Port Revenue Bonds.”

As to achievements in those areas, he says, “A monumental accomplishment is the recent award by the U.S. Department of Transportation’s Maritime Administration of 17.9 million to the Port Authority of Guam’s Rebuilding America Infrastructure with Sustainability and Equity Program.”

The project, estimated at more than $22 million, will upgrade wharves F1 through F6 to support ship-to-shore gantry crane operations.

Respicio says, “It will specifically address sheet piles and concrete cap spallings at the face of the port’s F2, F3, F4 and F6 wharves as well as the deteriorating structure of F1 Fuel Pier.  This initiative will ensure the sustainability of Guam’s vital port infrastructure — securing the island’s capacity to continue to receive over 90% of all imported goods.”

The port has worked collaboratively with the Office of the Governor, resulting in $1.6 million from the Office of Economic Adjustment to update the port’s 2013 Master Plan, he says.

“This funding allowed the port to work with its Owner’s Agent Engineer — WSP — on a massive initiative to update the plan and layout the framework for the port’s near and long-term vision to modernize its facilities, infrastructure, systems, and operations. The final recommendations and draft report is estimated to be complete by January 2022, the final Master Plan by March 2022 and [gain] legislative approval by October 2022,” he says.

Additionally, California Pacific Technical Services has begun work on the $1.22 million project to replace the port’s closed-circuit TV and access control system for the terminal yard and marinas — funded through a combination of funds and grants to include those from MARAD.

“The board of directors has authorized port management to proceed with a grant application to the Economic Development Administration for the acquisition of two [Ship To Shore] gantry cranes under its $1.5 billion Cares Act-Funded Recovery Assistance Program and a loan application to the U.S. Department of Agriculture for one STS gantry crane as a back-up to its [Economic Development Authority] application – recognizing the dire need to replace aged [Port of Los Angeles] cranes to ensure that service to Guam and the entire Marianas and Pacific Micronesian region goes uninterrupted,” Respicio says.

The procurement for the rehabilitation of Hotel Wharf and Route 11 Reconstruction is ongoing, he says.

The rehabilitation project is being funded through a $10 million federal grant along with local port funds and work will include reinforcing the old wharf and building, a security fence, installing lighting and constructing other surface work. Additional funds will be used to upgrade the access road on the Glass Breakwater leading to the wharf. The upgrades to Hotel Wharf will bring it into compliance with the U.S. Coast Guard criteria to regain certification as a designated waterfront facility and also will expand wharf capacity to alleviate any congestion at the main cargo terminal due to Guam being a major transshipment port for the region,” Respicio says.

The port worked closely with representatives from the Guam Customs and Quarantine Agency on identifying the site where the new customs inspection, holding, and securing area will be located. Respicio says.

“The port coordinated with the Department of Land Management on the survey and transfer of the property from the port to Customs and the Department of Public Works on the clearing of the property. Our OAE consultant provided proposed facility design layouts on the four-acre parcel adjacent to the main terminal gate, which Customs has agreed on one of the layouts.

The preferred layout design’s objective is two-fold Respicio says and allows “Customs to conduct their privacy operations inside the facility and … mandated the use of the Department of Public Works’ weigh stations by the truckers.”

There is also good news for the Mariana Islands as a location, Respicio says.

With more than $60.3 million in various capital improvement projects leveraging federal funds to supplement port funds, the port will be very busy in the next several years, Respicio says.

“Six major revenue bond funded projects are in different stages of the procurement process and are anticipated to be awarded during the second quarter of fiscal year 2022. In addition, federal funds acquired for further modernization, equipment acquisition, port security, marinas and harbor of refuge repairs, Port Police support, and wharves service life extension repairs and upgrades will dominate the landscape activities.”

The port’s capital improvement plans and operations are not without challenges, he says.

These include MARAD’s restrictions on the acquisition of the new gantry cranes with federal funds which are confined to domestically manufactured equipment and materials. “Buy American Act waiver requests are not [being] accepted,” Respicio says. “The increased cost of steel and construction materials resulted in major cost increases in several port projects,” he says.

Operationally, there are “challenges from COVID and the need to educate employees on “safety practices for critical infrastructure workers.”

The port’s own clinic was stood up in March 2020 and to date 55,555 employees, tenants and port users have visited the clinic, Respicio says. The agency established its own Port Contact Tracing Team with members volunteering to take on additional duties and becoming nationally certified.

“Their work helped to ease some of the burdens placed on the Department of Public Health and Social Services by conducting their own contact tracing, making arrangements for testing and keeping the employees updated and informed,” Respicio says. Additionally, the port was scheduled to host a third vaccine clinic in mid-January.

“Twenty-one months and 35 positive cases later, the port has refined its response to COVID-19 and has remained 100% operational throughout the global crisis,” Respicio says.

Respicio acknowledges all contributions to the port, he says. “I want to recognize the employees for their diligence and hard work in keeping the Port 100% operational and I want to thank the Board of Directors for their guidance and support in our plans to move the Port forward.  Also key to the Port’s success is the backing of Gov. Lou Leon Guerrero and Lt. Gov. Josh Tenorio.”

For the second consecutive year, the achieved the designation as a Low-Risk Auditee during the annual financial audit, which revealed a clean audit with no deficiencies. “Independent auditors Deloitte and Touche LLP rendered clean opinions of PAG’s FY 2020 financial statements and compliance over major federal programs. In addition, no material weaknesses and significant deficiencies in internal controls were identified by the auditors,” he says.

Moody’s Investors Service raised the port’s bond rating of Baa2 negative in May 2020 to Baa2 stable in April 2021 and S&P Global Ratings has upgraded its outlook for the Port to stable from negative and affirmed its ‘A’ long-term rating on the agency’s outstanding series 2018 Port Revenue Bonds.

“The Port has upgraded its financial management system from JD Edwards to Enterprise I, a significant accomplishment which has not been done in the past 20 years.  PAG anticipates the ultimate bene¬fits of better ¬ financial capabilities, better security, better features and functionalities, better efficiency with business processes and greater reliability with the new system,” Respicio says.

“In the beginning of FY22, the flow of goods into Guam has been good as seen in the improvement of port operations in loading and unloading of cargos, which resulted in a decrease in vessel work hours.

The port is seeing an increase in containers, he says. “For the first two months of FY22, the number of local containers handled by the port increased by 13% or 1,448 containers as compared to FY21, from 10,850 in FY21 to 12,298 in FY22. There is also an increase in breakbulk (non-containerized) cargo due to the military construction at the Lima Wharf and other military projects.”

In 2021 the port was holding containers to assist its clients. Respicio says, “Since almost the majority of the government and businesses are now operating normally, the port no longer stores containers beyond their free period.”

The port’s current aims include training and its recertification program for employees, Respicio says.

“In addition, and in coordination with the Association of American Ports Authorities, the Port will be implementing the Apprenticeship Model of Workforce Development.” The program “will upskill, reskill and educate port employees to fill critical roles in the supply chain through the apprenticeship model. This program is funded through an AAPA grant that is to be used for the building and expansion of apprenticeship programs within the transportation and maritime industry.”