Life on the water 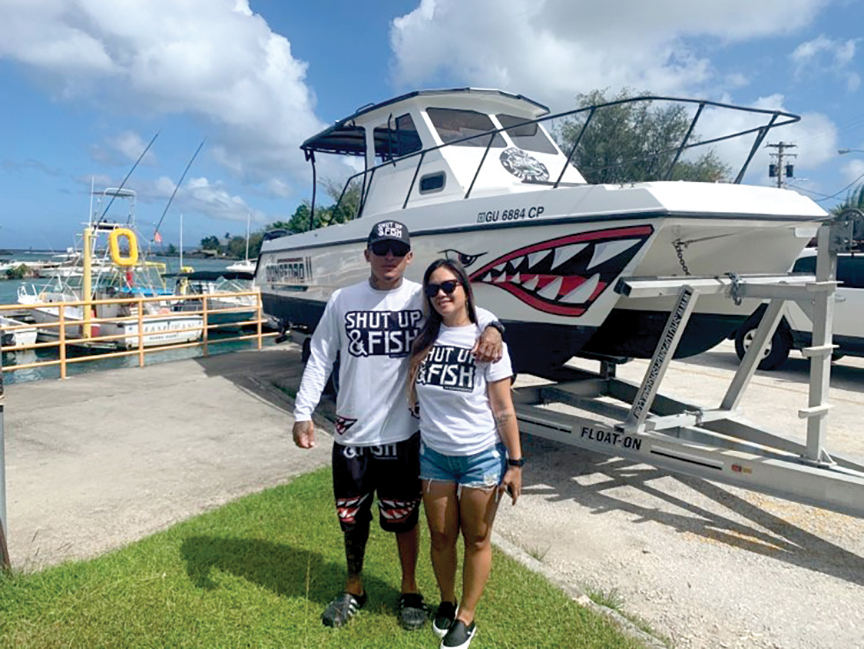 Joaquin and Christina Cruz, the co-owners of Guam fishing charter Shut Up and Fish stand in front of one of the three boats used for their business.
Photo by Morgan Legel

At the helm of one of Guam’s smaller fishing charter companies, husband and wife pair Joaquin and Christina Cruz own and operate Shut Up and Fish.

Joaquin is the “face” of the company, and he leads all the charters.

“Fishing has always been a passion of mine,” he says. “I fished with my dad growing up all the time.”

Christina has a more organizational and creative role. While she does manage the scheduling and booking for all the charters, she also does all the graphic design — from the video editing on YouTube and managing the website to the social media content and all the designs for the merchandise they market.

Both grew up for the most part in Guam, but in the early 2000s they each found themselves on a different island in Hawaii, Oahu. Neither knew the other was there, but a coincidental meeting led to five years of marriage, three children and multiple business ventures in Guam, once they returned in 2008.

The initial reason for the voyage back to island was that Joaquin’s father was sick.

“If his dad wasn’t sick, we might have never made it back. But things happen for a reason, you know, and here we are today. Because of him, because of fishing, things just fell into place,” Christina says.

Shut Up and Fish is not the couple’s first dip into the business pool on island. When they first returned to the island, within four years, they had many prosperous brands and businesses. Their first brands included Sensi, which was named after their first daughter, and Affiliated Lifestyles, the first urban streetwear lifestyle brand on island; their first businesses included Strictly Tees, which was founded in 2010 and SmallFry Children’s Boutique followed suit in 2012.

But the couple still weren’t satisfied. At the time, Joaquin was a commercial fisherman as well. He began to film his ventures at sea on a GoPro that Christina got him as a present and uploaded them onto YouTube. From there, Shut Up and Fish was born.

“What we learned is it is too hard to run and operate all those different businesses on our own,” Joaquin says. “We learned it the hard way.”

The couple sold off all their other businesses soon after Shut Up and Fish was founded, so they could focus on the fishing charter.

“We’ve been entrepreneurs the whole time — from business to business. And this one, we’ve been in it so long because we’ve found our passion for it,” he says.

The Coronavirus pandemic had an effect on Shut Up and Fish, just as it has had on many other businesses throughout the island. Since it is hard to social-distance on a boat, a different process came into play.

“Since COVID, we have had to change everything,” Joaquin says. “I am selective at screening the groups before they come with us.”

Shut Up and Fish owns and operates three boats for the charter, but because the company only has two employees — Joaquin and Christina — only one boat can be operated at a time.

On average, before the COVID-19 pandemic, Shut Up and Fish led between 20 and 30 charters a month, sometimes with five a weekend, or even three a day. According to Joaquin, each charter lasts about three to four hours and tends to stay within 10 miles of shore, unless it has been booked or requested for longer or to go farther out.

Most recently, Shut Up and Fish won the Pika’s Best of Guam 2020 award for Best Fishing Charter.

According to the couple, while tourists played a role in the success of their business, the business is still making it sans island visitors. Now, the clientele is a little different.

“The majority of the charters are locals and military,” said Joaquin. “But there are those people that have money and want to travel, and they are constantly on our website messaging us, wanting to know what day this quarantine is going to end so they can come fishing with me.

“The coolest thing about we do is the people, customers and viewers from all over the world,” he says. “They make my day; it’s motivating. They say it inspires them, they love watching our family do what we do, and wish they could do that.”