One summer, when Wayne Cornell was a teenager, he decided he had taken enough of working on his uncle’s 160-acre farm in upstate New York. 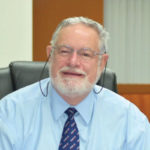 Cornell says, “I remember telling my father, ‘Dad, I am going to college and learning to work with my mind, because I am not going to do this for a living.’ He responded, ‘Good; now get back to work.’ That same summer, my next-door neighbor, who was a civil engineer and land surveyor with a small, but highly regarded engineering firm, asked me if I wanted to work for him part-time. After getting my father’s permission, I began working for him on Saturdays and whenever I could be spared from farm work.”

Already an excellent student who loved math and science, the summer job instilled a love for engineering and laid the foundation for a career that would eventually take Cornell half a world away and into the position of president and CEO of one of the biggest firms in Guam.

In early 2004, three companies formed a joint venture for the purposes of pursuing the large Base Operations Support Services Contract on Guam — Day & Zimmerman, SKE Support Services Inc. and Parsons Infrastructure & Technology created DZSP 21 LLC. After multiple changes of ownership, DZSP 21 is now owned by a joint venture of PAE and Parsons Government Services, and is the fifth largest employer in Guam — with 900 employees, including “embedded” subcontractors from Advance Management Inc., Cruz Associates Pacific and PacSea.

DZSP 21 fulfills the BOS services contract by providing products and services to all military branches in Guam, to include the Guam Guard.

“I lead a spectacular organization”, says Cornell. “[DZSP 21] provides exceptional services to our military, and I am happiest when our customers are delighted and my people are recognized for their incredible services.”

After graduating high school, Cornell was awarded a full scholarship to Clarkson College of Technology, an engineering school in New York. Although Cornell describes Clarkson as “a great school,” he chose instead to enlist in the U.S. Navy, citing a “new-found affection for wine, women and song” as a possible influence.

During basic training at Great Lakes, Ill., Cornell says, “The company chief saw something in me and marched me to the Navy Career Counselor and stated, ‘Lieutenant, we need to find this sailor an officer program; he’s much too smart to be a white hat’… After a series of tests and interviews, I was selected to go to the United States Naval Academy.”

Cornell believed nuclear propulsion would become the Navy’s propulsion system of the future and chose applied sciences as his major. “It was the preferred major of those who intended to choose nuclear power upon graduation — very heavy on math, electricity, nuclear physics, wave physics and underwater sonics.”

Upon graduation, Cornell was commissioned into the Civil Engineering Corps. Approximately two years later, he was sent by the Navy to attend post-graduate school at the University of Illinois at Urbana-Champaign, where he earned a master’s in civil engineering with courses in construction and engineering management.

During his career with the CEC, Cornell served in all four key CEC career fields — public works, construction, Seabees, and staff. “However, four of my seven tours were in public works and installation management. Upon retirement in 1991, I was blessed to have five job offers, chose facilities management at a Chicago-area university, got into government contracting in 1995 and the rest is history.”

Along with his military achievements, Cornell is a registered professional engineer (civil) in Hawaii and Virginia, and is a member of the Society of American Military Engineers, Guam Society of Professional Engineers, Guam Chamber of Commerce and Guam Contractors Association. He has also worked for companies such as DynCorp, Baker Support Services Inc., Raytheon Technical Services Co., and C. Martin Co.

The philosophy with which Cornell approaches his profession — as well as life overall —  emphasizes hard work, being proactive, being mindful of the consequences of your decisions, balancing careful planning with boldness, personal integrity and character, gratitude and the importance of family and faith. He attributes much of his success to “circumstances, luck and God’s blessings.”

As executives, Cornell advises learning to stretch the dollars of your organization by developing leaner, more efficient processes; learning to identify problems — including when a particular situation can no longer be saved — and finding ways to resolve them; developing plans of action with milestones and monitoring them frequently; identifying the customer’s ‘hot buttons’ and focusing resources on them; being willing to try something new and continually developing yourself; being strong enough to make tough choices; listening to both your customers and your people, “most especially your ‘chiefs’”; training your successor; taking care of your people; and if nothing else, reading James Kouzes and Barry Z. Posner’s “The Leadership Challenge.”

In conclusion, Cornell says, “Be a leader. Good management skills are important but you can hire them. Irrespective of what others may say, good leadership is good common sense.”