Keeping the glass half full 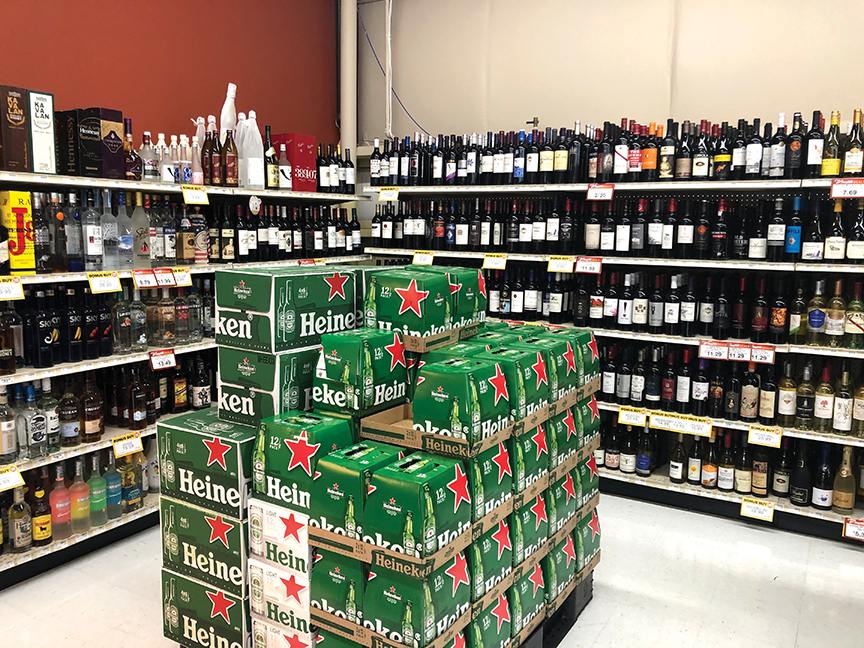 Boxes of Heineken beer, which are distributed by Island Wines and Spirits, have been top sellers in the past several months.

By Rianne Peredo and Morgan Legel

With the temporary closure of bars and restaurants prohibited from serving alcohol for several months because of COVID-19, businesses in the wholesale beverage industry have been affected with the loss of revenue from on premise locations. However, sales have been steady at off premise locations such as grocery stores and gas stations. Non-alcoholic beverage sales have also shown shifts in consumer behaviors. 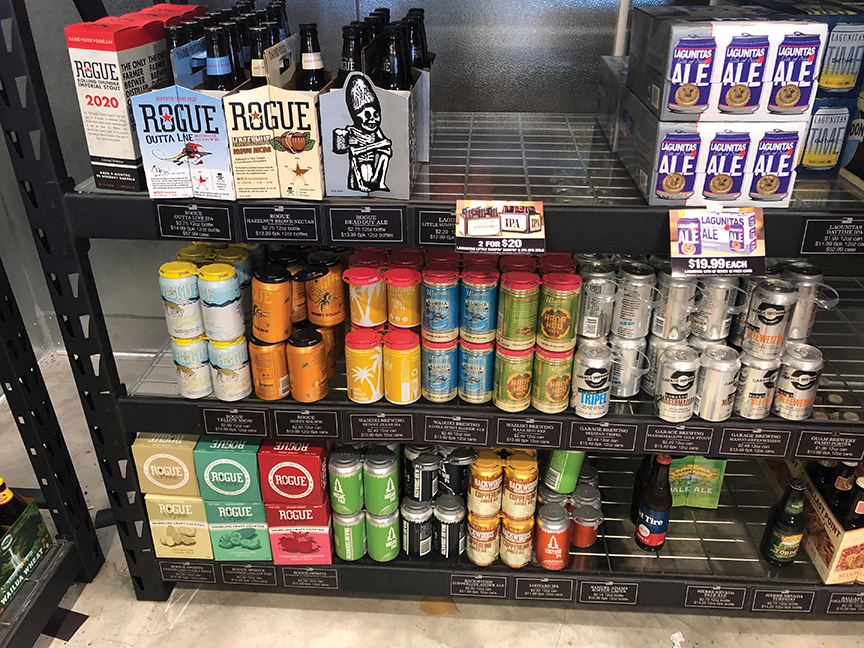 Rogue and Waikiki Brewing Co. beer, which are distributed by Guam Premium Beverages, are sold at the Shell gas station Foody’s in Mangilao. 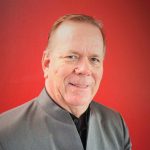 “The first month of revenue and sales since the outbreak — we never stopped working and what we lost were our on-premise [sales]. My guesstimation is around 30%,” says William I. Mayfield, director of operations at Guam Premium Beverages. “Our revenue picked up in the off-premise [sales], which is the convenience stores, grocery stores and all that. So we didn’t really feel the hit that hard.”

Titan Imports Inc., which distributes wines and spirits such as Banfi Rosa Regale and Chivas Regal, was also affected by the temporary closures. 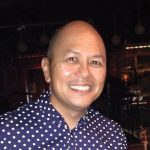 “There was a considerable drop in sales, as a key part of Titan Imports’ business supports the tourist market,” says John Antenorcruz, managing director of Titan Imports. “The good news is Titan Imports’ off-premises business increased due to customer loyalty and key core branding promotions; Chivas Regal, Absolut vodka, The Glenlivet and Jameson Irish Whiskey improved. Wine sales in the stores had a 300% growth, and this is just consumers who can’t dine in and found their favorite bottle of wine in the stores.”

Mayfield attributes Guam Premium Beverage’s ability to adapt during the outbreak to the fact that the products it offers are made to order and produced in small batches.

However, the company has encountered some challenges. A truck driver transporting a shipment for the group reached a check point on the U.S. West Coast; his temperature exceeded 99 degrees Fahrenheit and the truck was confiscated.

“That particular shipment was delayed about two weeks. That was at the very early stages. And did we run out of some products? Yes, but it really didn’t matter. …We [were] going through that first two-week transition period; it didn’t really matter,” says Mayfield. “Right now we’re having problems. I can’t get a couple of the beers that I want because they ran out of cans — so they can’t can the beer because the can factories closed down.”

Antenorcruz is hopeful about the situation overall. “The business will definitely be affected as the company moves forward in the future, but I am hoping that Guam and its leaders are doing their best not only to keep Guam safe but opening up the tourist market soon,” he says.

According to Mayfield, GPB is “in a holding pattern” until restaurants and bars are allowed to serve alcoholic beverages. “So, we got new stuff in stock, but as soon as that all starts opening up we’ll be hitting it hard again. But in general, we were growing and we got a long way to go. We’re only going to do better. We were pretty excited about 2020; we just came off our best year in 2019,” he says.

Other key players in the beverage industry said earlier in a May story that their businesses have adapted as well to changes in the industry as more people stayed home due to the temporary closure of businesses. 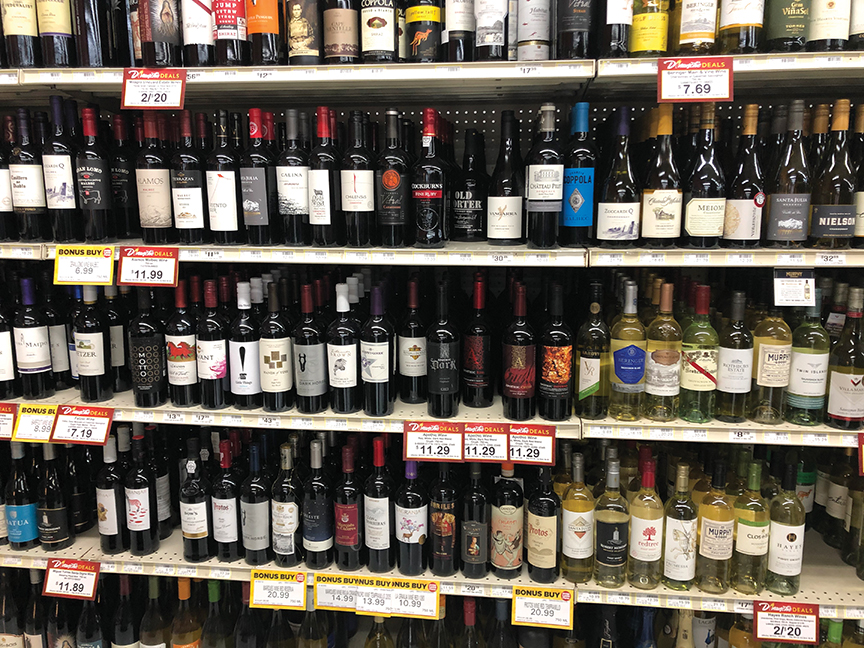 The wine section at Pay-Less Supermarket in Mangilao, shown on June 17, has discounted prices on select items.

Island Wines and Spirits, a subsidiary of Mid Pacific Distributors Inc., distributes beers, liquor and more such as Heineken and Jack Daniel’s. 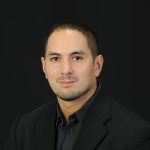 “We are definitely down [in sales] but it’s an interesting time because the entire industry is down with us,” says Edward J. Calvo, general manager of Island Beverage Distributors as well as Island Wines and Spirits, and assistant general manager of Mid Pacific Distributors Inc. “Obviously, the nature of our business, and a lot of our competitors, is tied into the tourism industry, and a lot of that all being closed at the same time. It affects us all. It’s been tough for us losing so much customer base in such a short amount of time, and we’ve just been focused on where there are customers seeking products.”

Consumer purchases at grocery stores during the past few months changed, with people preferring to limit their store visits and opting for larger packages of beer in cases and 30-packs.

“This has been a good opportunity to prepare for the future with organization, conducting more training and just really getting ideas for how we can improve internally short-term and long-term, when the on-premise businesses start to open up again,” says Calvo.

Some state governments in the U.S., such as California, have permitted the sale of sealed alcoholic beverages with meals for takeout. According to data from MultiState, every state except Utah allows restaurants to sell alcohol for off premise consumption as of April 23. Additionally, 35 states allow restaurants to deliver alcohol to customer’s homes.

Calvo believes it was a missed opportunity for local wholesalers to thrive as the food and beverage industry undergoes significant changes.

For non-alcoholic beverage sales, Coca-Cola Beverage Co. (Guam) and Foremost Foods Inc. had a decrease in sales, but it has begun to stabilize. 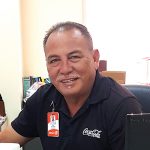 Jose Fernandez, Guam sales manager for Coca-Cola Beverage Co. (Guam) and Foremost Foods, Inc., says the loss of revenue from restaurants was approximately 30%. “But with the markets, [business has] held its own. We thought we were going to take a much bigger hit in the beverage industry. But once [the government] started doing lockdowns, with the sporadic buying in the beginning, there was an up-kick in the market. Then, it slowly started to balance itself out. Overall, it has been sustainable.”

Fernandez also noticed consumers were buying items in bulk quantities, which includes gallons of orange juice. “People like things in bulk quantity, especially when you have to stay home, so you don’t have to keep coming to the store,” he says.

Additionally, a higher volume of orders for “functional beverages,” like Powerade, orange juice and cartons for fountain drinks were purchased by the Defense Logistics Agency, which is contracted to support military fleet.

Despite the challenges that resulted because of COVID-19, Fernandez says it was a learning experience, albeit an unprecedented one. “We’ve been through storms and other instances, but this was like something all on its own. Now, anything to pop up in the future will be easier to handle and gauge,” he says.