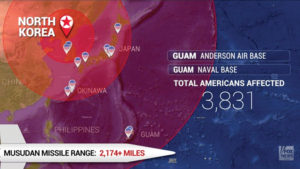 During its coverage of North Korea’s threat to launch a nuclear missile to Guam in early August, Fox News aired a graphic stating Guam’s population as 3,831. The figure reflects only the number of servicemen and women stationed on the island’s military basis. The video depicting the graphic was later updated.