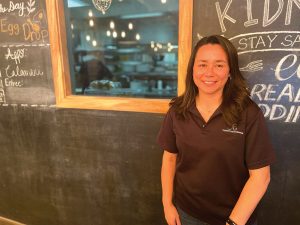 Marie N. Guerrero got her first official taste of restaurant life back in 1988, when she worked in a tavern in North Carolina, but her experience with food and hospitality started long before that at home.

“Coming from a Chamorro family, that was kind of our baseline,” says Guerrero, who is one of eight children. “Come and eat, get drinks. That mentality was always instilled in us.”

It has also served her well over her 30-year career in the food and beverage industry, most of it on Guam. She rose up through the ranks, from server to CEO of B&G Pacific LLC, the company that owns Three Squares restaurant in Tamuning and other food service ventures, hitting nearly every position in between on the way there.

Guerrero, who comes from a military family and grew up “all over the place,” moved to Guam in 1994 to live in the culture her relatives worked hard to hold onto tightly while living overseas. “And I never left,” she says.

When she arrived on the island, Guerrero aimed to study physical therapy, but a lack of college programs meant jumping into the workforce. She started as a branch clerk at the Bank of Hawaii and quickly realized it wasn’t her “cup of tea,” she says, so she took a job as a server after meeting Frank Kenney and Timothy Murphy, who were just opening the doors to the first Jamaican Grill in Agana.

“Then Planet Hollywood opened,” she says. After some initial reluctance, Guerrero joined the scores of people who lined up — that’s what they did in those days — to seek out positions in the new, shiny addition to the still-budding Tumon Bay strip.

“The last hour, I gave it a try, met with their corporate people, and I got hired,” she says. “I joined Planet in 1997. Then I quickly became a bartender, and then I ended up being a trainer. And then from there, it was just…the sky’s the limit.”

She had been named a supervisor within a year and then a manager. After that, the restaurant promoted her to assistant general manager, then general manager, and eventually a vice president.

“I fell in love with the excitement,” Guerrero says. “It was a constant rush. And the more things happened, the more I was wanting to learn more and do more.”

Guerrero’s training experience at the Tumon Planet Hollywood, which hosted staff from other locations in Asia, helped solidify her path forward. “The more I train, the more I learn,” she says. “The more I learn, I figured, ‘Oh my God, I really like what I do’.”

It also helped Guerrero secure a management consulting gig for Pacific rim cuisine restaurant Sam Choy’s, where she eventually accepted a job and helped flip it to what it is today: Sea Grill Restaurant — where she spent several more years.

“I think that’s where my franchise life as a person in a restaurant down in Tumon [ended],” she says. “It was time to move, make that leap of faith. So that’s when we [her and Mark J.B. Borja] created B&G Pacific.”

B&G was originally intended to supply food services related to the military buildup, but when that was delayed, the company morphed into a catering company and operated out of the ballroom and kitchen at the Aurora Resort, now the Lotte Hotel Guam.

During that time, B&G’s cookie manufacturing business, Everything Guam, also started up and Latte Stone cookies were born, which today can be found in ABC Stores and T Galleria by DFS in Tumon. By 2015, B&G had a manufacturing and kitchen space in Tamuning and opened up the front of the house a year later as Three Squares restaurant  —  a mix of local and stateside cuisines.

For Guerrero, it was her first time operating outside of Tumon.

“Being in Tumon is a whole different animal,” she says. “It’s nice to [be in] a tourist destination and just kind of perpetuating the culture and watching people embrace it…But there is something to be said to having local people [at the restaurant].”

“My friends come in, my family comes in,” she adds. “It’s nice to see some babies getting baptized…people coming in for birthdays. The gal’s night. To be a part of that is good. It’s definitely the upside for me.”

Borja and Bartley Jackson serve as partners with Guerrero.

She has also conducted server trainings for restaurants through the Guam Hotel and Restaurant Association’s apprentice program to help elevate service on the island, she says.

“For the food and beverage business, I personally think you have to really have the passion for the industry. It’s hard work. It’s holidays. It’s late nights, sometimes early mornings,” she says. “It’s got to be in your in blood.”

As far as her management style, Guerrero says she believes in leading by example and living by what she calls her serenity prayer mantra: “God grant me the serenity to accept the things I can’t change, and the courage to change the things that I can. And the wisdom to know the difference between the two.”

“I read it every day,” says the mother of five who lives in Mangilao. “When I face a new challenge or a new position or have to make a decision.”