on September 20, 2022 | Leave a comment
Departments Features In the Spotlight 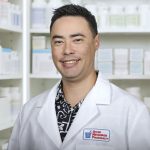 Joshua Wise is the new chairman of the Commonwealth of the Northern Mariana Islands Chapter of The American Red Cross. Wise is the general manager of PHI Pharmacy and has been active with the Red Cross for several years, including serving as a board member since 2021. 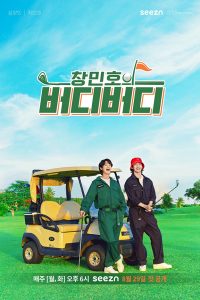 Two South Korean artists are starring in a new golf variety show, which shot its first stop in Saipan. The Soompi.com article called Saipan “a mandatory place to visit on a golf trip.”

Shim Chang-min, also known by his stage name Max Changmin or Max, is a singer, songwriter, actor, and a member of the pop duo TVXQ.

Choi Min-ho, better known as Minho, is a rapper, singer, actor, songwriter, and model. In May 2008, he debuted as a member of South Korean boy group Shinee, which later became one of the best-selling Korean artists.

“Changminho’s Birdie Buddy” is a variety program that follows TVXQ’s Changmin and SHINee’s Minho as they head off on a golf vacation.

that Changmin and Minho impressed the producers when they persisted with filming during Saipan’s rainy season. The duo also competed a round against a local Saipan golf master, showcasing their dedication as they thought of strategies.

“Changminho’s Birdie Buddy” premiered Aug. 29 and air at 6 p.m. every following Monday and Tuesday on seezn.

It started as a small project more than 20 years ago as a Sea Grant Coherent Area Program.

The National Sea Grant Advisory Board reviewed the program in October 2021. 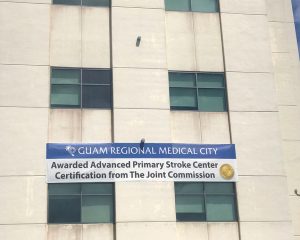 Guam Regional Medical City earned The Joint Commission’s Gold Seal of Approval for “Advanced Primary Stroke Center” Certification by demonstrating continuous compliance with its performance standards, according to a press release. The Gold Seal is a symbol of quality that reflects a health care organization’s commitment to providing safe and quality patient care. GRMC received written notification from TJC on July 19, stating that the certification cycle date started May 18 and is typically valid for up to 24 months.

The certification recognizes health care organizations that provide clinical programs across the continuum of care and signifies to their respective communities that the quality of care provided meets the unique and specialized needs of stroke patients. The certification evaluates how organizations use clinical outcomes and performance measures to identify opportunities to improve care, as well as to educate and prepare patients and their caregivers for discharge from the hospital.

GRMC underwent a rigorous Joint Commission review in May 2022. During the inspection, a Joint Commission reviewer evaluated compliance with related certification standards developed in consultation with health care experts and providers, measurement experts, and patients. The review also included hospital observations and interviews. 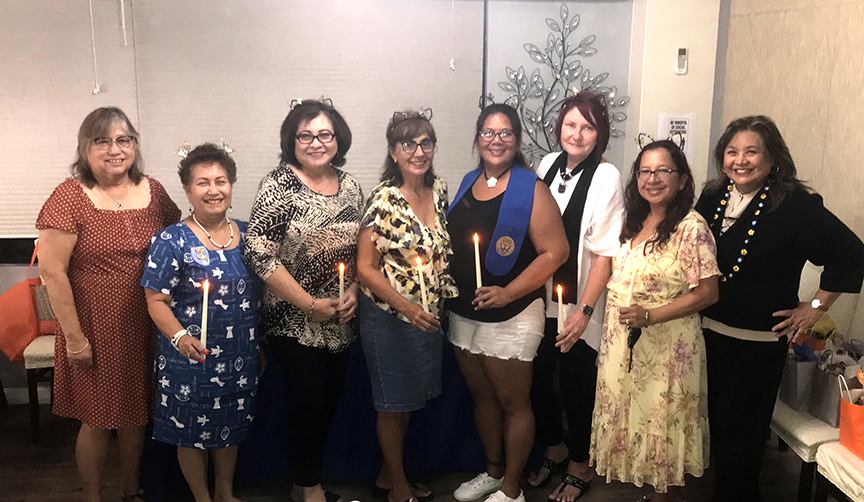 The Soroptimist International of Guam’s new board members were sworn in by District Court of Guam Chief Judge Frances Tydingco-Gatewood on Sept. 5.

SIG participates in organization-wide programs including the Live Your Dream Award, Ruby Award, Violet Richardson Award and Dream It Be It: Career Support for Girls. SIG also helped found Erica’s House of Hope – Guam’s only visitation center offering support service for parents and children in need of a safe venue for visitation and exchange between parents. Judge Tydingco-Gatewood thanked the new and returning board members and the SIG group for their efforts in supporting families via Erica’s House. The Soroptimist International of Guam met Sept. 5 and welcomed to their meeting two high school students who are starting Soroptimist Clubs at their respective schools. Lily Blaz of the Academy of Our Lady of Guam and Hyunjin Kim St. John’s School reached out to the local organization to inquire about starting a junior program with their peers at school. The SIG will be mentoring the girls and assisting the Soroptomist Clubs at their schools. 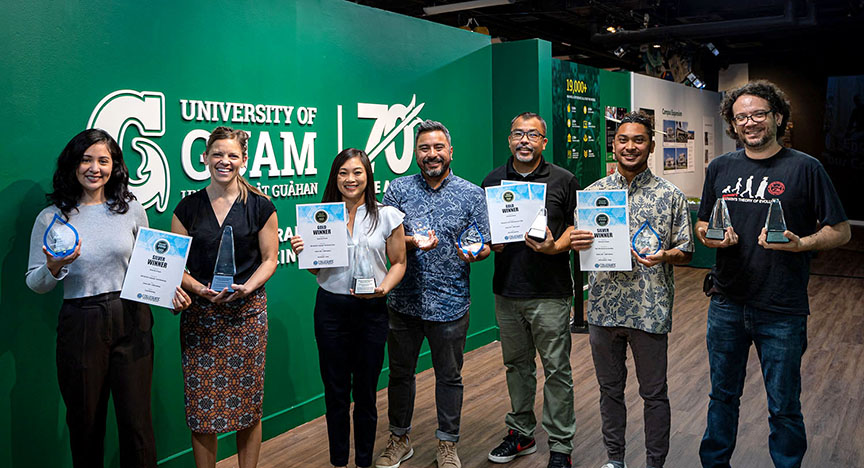 This is the highest single-year award total for the UOG Marketing and Communications Office. 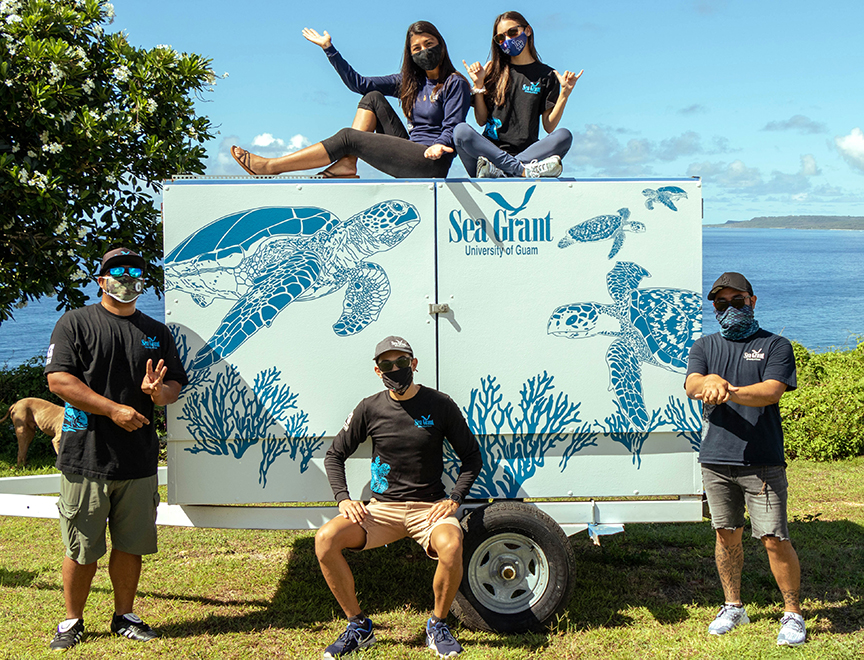 The outreach team of the University of Guam Sea Grant program in 2021 with their new grant-funded outreach trailer, which has allowed them to bring lessons on coastal and marine conservation to villages throughout the island.  From left) Teddy Concepcion, Leilani Sablan, Phillip Cruz, Addie Ferguson, and Josh Muña. 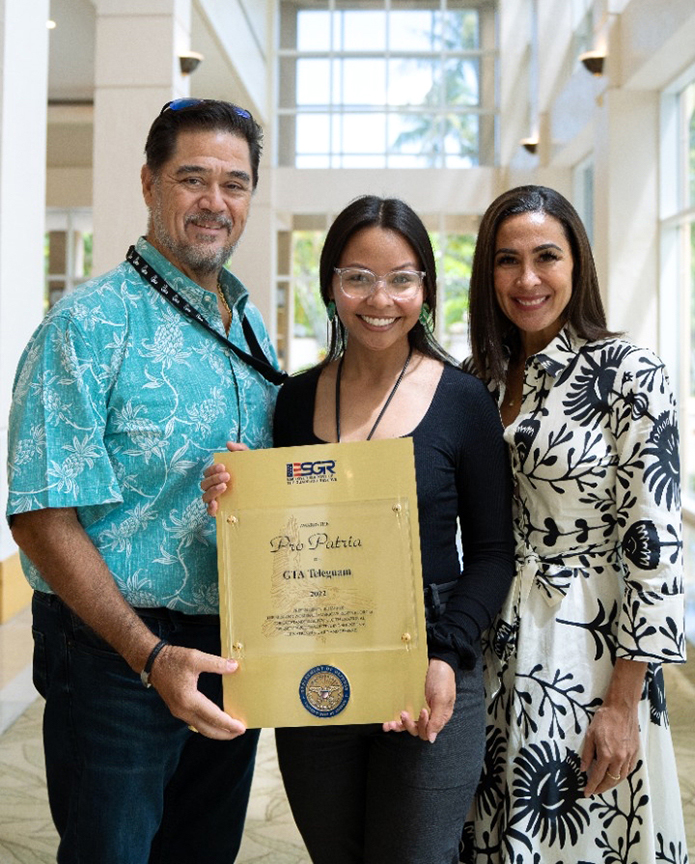 A new website and mobile app are part of the Hotel Nikko Guam’s work to improve guest experience in anticipation of increased tourism.

The hotel aims for the website, nikkoguam.com, “to be more informative and convenient for travelers to make online bookings, as well as learn about activities and experiences,” according to the press release. The local hotel is also offering a new mobile app equipped with online tools that allow for digital check-in before arrival at the Nikko. In addition, the app can be used as a digital room key and it also receives real-time messages from the resort. Guests also can use it to manage reservations for dining and other activities.

Hotel Nikko Guam, a Premier Hotel Group property and a member of Ken Corp., in April 2022, started work on these and other improvements in preparation for increased tourism.

Beginning in August, the Nikko began adding enhancements, including attentive service that starts when guests are welcomed at the airport, environmentally friendly room amenities, beverage menu enhancements and activities that take advantage of the hotel’s location near a lightly forested area along Tumon Bay. 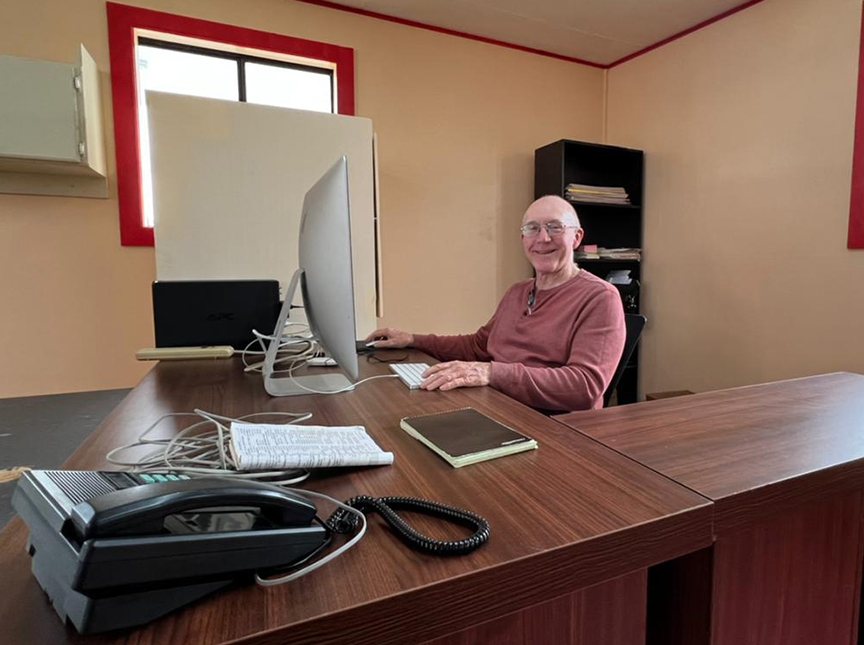 After 50-plus years in the Uliga section of Majuro, the Marshall Islands Journal and its related printing company have moved to Delap. The paper’s relocation is to newly renovated offices on the second floor behind the Flame Tree bar and restaurant. The Micronitor printing company is on the first floor.