on July 15, 2022 | Leave a comment
Departments Features In the Spotlight 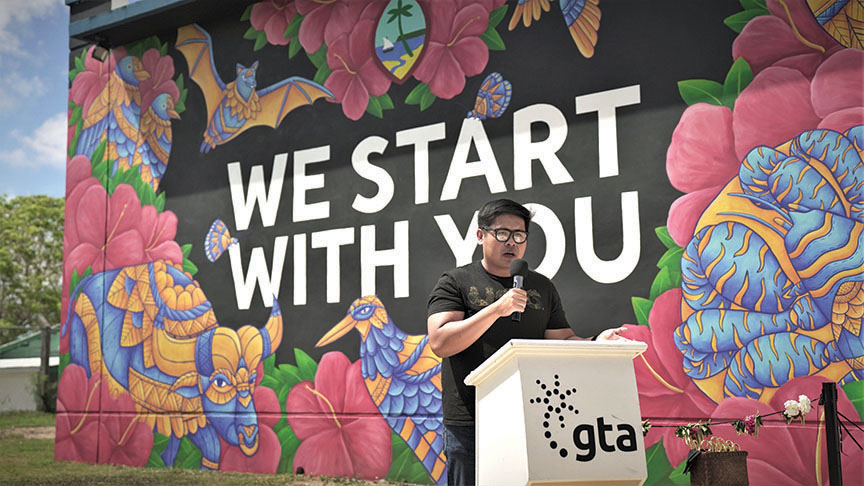 GTA is collaborating with local artists, village mayors, and the Island Beautification Task Force to launch the GTA Village Mural Project. The first mural, ‘We Start with You’ is located at the GTA Northern Business Office in Dededo and was unveiled in June.  The mural was created by local artist Austin Domingo, who is shown with the mural.

The next mural will be in Mangilao. 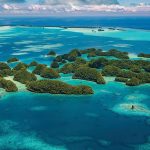 Signature Luxury Travel and Style was just one of the media that featured Palau’s “Ol’au Palau” promotion, a points program that will get tourists exclusive cultural experiences during their stay in exchange for supporting sustainable tourism practices and venues.

The print and digital Australian publication aims for the luxury travel market, and also distributes at hotels and airline lounges.

The story on Palau featured images of the Rock Islands and a secluded bay. 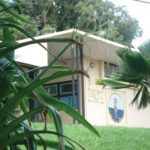 The F.Q. Sanchez Elementary School in Humåtak has been named to the National Trust’s list of 11 Most Endangered Historic Places in America for 2022.

The school joined the register of historic places in 1998, according to the Guam Preservation Trust.

Built in 1953 and designed by Viennese architect Richard Neutra, F.Q Sanchez Elementary School was Humåtak’s only school until it closed in 2011. The school’s name commemorates Humåtak village resident Francisco Q. Sanchez, the school’s first principal. Today, the building is vacant, unusable, and deteriorating. In March 2022, Gov. Lourdes A. Leon Guerrero signed Public Law 36-82 into law, allocating $3.5 million in funding to rehabilitate the school.

“The Properties of Perpetual Light” received a gold medal in the category of Best Regional Non-Fiction for Australia, New Zealand, and the Pacific Rim — making this the first gold medal for UOG Press and the book’s second national book award. In 2021, the book also won “Best Multicultural Nonfiction” in American Book Fest’s Best Book Awards.

The Center for Medicare and Medicaid Services awarded FHP Home Health a Quality of Patient Care Star Rating score of 3.5 out of four after an FHP audit – where FHP more than met national established quality standards set by the federal government, despite challenges due to the pandemic.

FHP Home Health, a Medicare certified agency since 2005, provides patients the option to receive medical care at home as recommended by a doctor. The pandemic caused an increase in the number of patients who preferred to receive care in their home.

The Center for Medicare and Medicaid Services also ranks the areas of nursing care, physical therapy, and home health aides. The quality star rating is a tool to identify, compare, and partner with outstanding agencies. 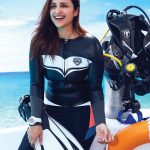 Chopra received her PADI Open Water Diver certification in 2013 in Palau. She has more than 36 million social media followers. 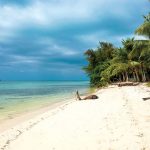 Ever heard of www.thetravel.com? This is a travel site that shows that a little knowledge is a dangerous thing – or that not just any old island will do in a travel feature.

In “What to know about the beautiful island of Saipan,” The Travel’s writer offers this:

“One of Saipan’s most popular tourist attractions is Snake Island, which is off-limits to visitors due to its venomous snakes. However, several other ‘secret’ islands are worth exploring, including Managaha Island, Bird Island, and Grotto Cave.”

For those who might avoid Saipan due to a fear of snakes, there is good news.

Snake Island or Ilha da Queimada Grande is not one of the ‘secret’ destinations in Saipan, or anywhere else in the Northern Mariana Islands.

In fact, Snake Island is located a little less than 100 miles from the Brazilian city of São Paulo. That island is home to more than 4,000 lancehead vipers.

We are instead sharing a scenic photo of Saipan from our own files.

Thetravel.com did equally well with its article on Guam.

“Non-US citizens must be fully-vaccinated against the coronavirus and must present a negative test upon arrival,” it wrote. The “close enough is good enough” website also directed visitors to Cocos Island to Guam’s south — currently closed. 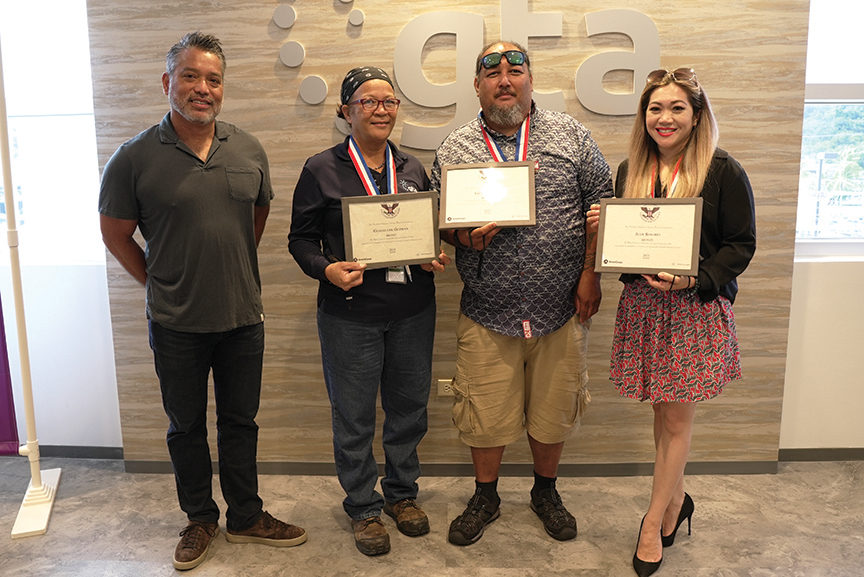 GTA announced that three members of GTA’s staff received the President’s Volunteer Service Award for their contributions in giving more than hundreds of hours to non-profit organizations and supporting communities in need.

Guzman is a member of the Sanctuary board and the Santa Rita Municipal Council, Jackson volunteers at the Sagan Kotturan Chamoru Cultural Center and is involved in his village community in MongMong. Rosario volunteers with Mañelu and serves on various non-profit boards.

GTA began a volunteer program and became a PVSA certifying organization in 2021.