How I spent my summers 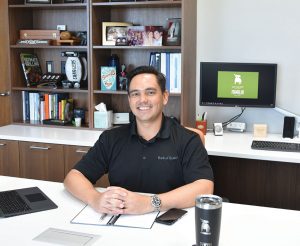 “One of the biggest pluses of banking is just the amount of people I get to interact with and help and see them succeed. I really get a lot of joy and have a lot of fun seeing and knowing I helped someone start up a business and then seeing them succeed.”

Joaquin P.L.G. Cook has always been involved in the banking industry. His grandfather, the late Jesus S. Leon Guerrero, was the founder of Bank of Guam. The bank was officially chartered in 1972 and in the present-day has branches in the Federated States of Micronesia, Northern Mariana Islands, Palau, Marshall Islands and San Francisco, Calif.

Cook started working at the bank as a teenager.

“The last summer of my life to really enjoy as a youth was when I was 12 years old — as soon as I hit 13, I worked all summer long — Monday through Friday, eight to five. My dad would drop me when he went to work and pick me up at the end of the day when he went home. So that was every summer from freshman year in high school all the way through graduating college,” he says.

Initially, Cook pursued another career path as a young adult.

“My grandpa was a real big positive influence in my life and so I grew up being with him and he was obviously involved in banking and business,” says Cook. “I always thought I’d be involved in the bank somehow — whether it was in a board position or somehow involved — but originally I wanted to be a doctor.”

His grandfather was supportive of his decision as Cook continued his studies at the University of Calif., San Diego with that goal in mind. However, his plans changed.

“Maybe my sophomore year … I just remember getting to some of the upper level biology classes. It turned out not to be what I really wanted to do.”

However, he says, “It wasn’t as exciting or as interesting as I initially thought it was going to be.”

Cook graduated in 2001 with a bachelor’s in science with a focus on management science.

“After college, I came back and joined the bank’s management training program. And that kicked off my career with the bank at that time,” he says. “I was the vault teller for almost half of my management trainee career … And then I did a lot of collections — loan collections and calling up delinquent customers — and then I got more into the lending side of the industry.”

In 2004, he returned to California to continue his education at the University of San Diego and graduated in 2006 with a master’s in business administration with a focus on finance and real estate law. He is also a 2011 graduate of the Pacific Coast Banking School at the University of Washington.

In 2019, Cook officially became the president and CEO of Bank of Guam.

“Of course I was very honored and excited and happy. But at the same time, the weight of the responsibility… you realize everything you’re responsible for and it’s a lot if you think about it,” he says. “I’m always aware of it, but I try not to get bogged down by it because I think then you’ll just get stressed out and miserable.”

Cook is involved with the business community in other ways as well. “I have two other businesses that I’m part owner of … The one I started the year I got married is Byerly and Cook [Co.] — it’s with one of my best friends, Dylan Byerly, and it’s an automotive services business,” he says.  “My other one is Crust Pizzeria. I started that with Brian Artero and that’s been a whole industry that I was never really too familiar with. But it always seemed like an interesting industry to be in. So that’s been a big learning experience and it’s been fun.”