Take it to the turf: Guam companies build camaraderie and morale ‘out in the field’

Companies across the island have been taking part in team sports leagues for decades, many of them fielding championship teams that embody the spirit of “work hard, play hard.” However, whether a team is made up of fun-loving casual players or uber-competitive veterans, every company can agree that there’s nothing quite like competition to fuel the spirit of camaraderie in their employees. 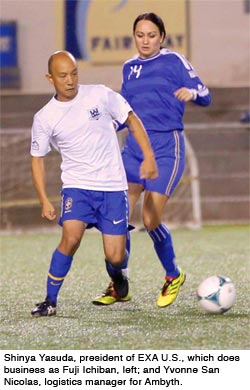 The Guam Hotel and Restaurant Association has been providing sports leagues for its members to participate in for well over a decade now. Organized and handled almost completely by Lucia Calvo, project manager for the association, the sports contingent for the GHRA is comprised of individual leagues for softball, basketball, indoor volleyball and bowling.

The four leagues run at different times of the year, with the softball league from January to April, the basketball league from April to late July, the indoor volleyball league from July to early September, and the bowling league from September to the end of November. “The league is primarily made up of our member companies, but we do give special consideration for a small number of government teams, like the [Guam Police Department] and judicial teams,” she says.

“The leagues were created shortly before I started at GHRA, back when Dave Tydingco was president […]. At the time, there were a lot of outside leagues, but not very many employees were involved. In our leagues, all players must be employed by the company or companies that they’re playing for.”

Over time, the leagues have grown to the point where there are often too many interested companies, and some applicants have to be turned away. “We try not to have more than 45 teams in any given league,” Calvo says. “We have an optimal number that we try to meet every year, but we often have too many teams, and we have to cut a few of them.”

She adds that each league is separated into recreational and competitive divisions, and companies are sorted into each division based on the experience of their players. “Some companies have staff that play for a national team or have historically played at a much higher level than others, so we try to sort the teams according to their collective level of experience. This is a business league, after all, so we don’t want to discourage new players from signing up and having friendly recreational competition. But we also don’t want to leave out businesses that want to play on a more intense, competitive level.”

While Calvo is responsible for most of the work organizing and handling the leagues, she does seek help from partner organizations, working with different sports associations to referee and plan the games.

“For softball, I work with Bill Tedtaotao, who runs the Bud Light/ Parks and Recreation Softball League and is certified by the American Softball Association. For basketball and volleyball, we go through the Marianas Sports Officials Association. And for bowling, I work with Joey Miranda over at Central Plaza,” she says.

“Volleyball is probably our fastestgrowing league since we moved from beach to indoor,” she says. “But our most popular leagues are still softball and basketball. All of our members and affiliates are trying to be part of that.”

In addition to the hotel and restaurant teams, each league includes teams from almost every major business connected to the hospitality industry.

In spite of being one of the smallest teams in the GHRA basketball league, Pacific Data Systems showed many of the other companies in the league that they had some moves after being crowned the Recreation Divison’s 2013 champions.

“For a small company, our basketball team is recognized as one of the better teams in these leagues,” says Robert Oshiro, the company’s sales manager. “Last year, we played Calvo’s Insurance for the semifinals and Justice 2 for the finals, both customers of ours. No customer golf here.”

However, Oshiro admits that their 2013 win has left PDS with some mighty big shoes to fill in the 2014 season, as the top two teams in the Recreation Division are required to move up to the elite Competitive Division, where they will face off against current and former members of the Guam national basketball team.

“Because we’re a small company with varied interests, it’s hard to organize teams for many of the sports,” Oshiro says, “But we’ve been consistent with fielding a basketball team for the Shirley’s and GHRA leagues over the past three years. This is going on our fourth GHRA league, and in spite of having a team roster of around 10 people, we get a great fan turnout, especially our staff and management.”

The players and the company itself reap more benefits than just winning a championship. Oshiro says the basketball leagues aid in relationship building both on and off the court.

“We see the best and worst of each other — more the former,” he says. “Sure, we stress good sportsmanship, but analogous to life, you learn to not only enjoy the good times with each other, but rise up over the pressures that sports bring out. That is the most gratifying, when you can show your competitive side — as colorful as it may get — but leave it all on the court, along with your effort.”

The Shirley’s Basketball Invitational League is coming up on its 15th year of its annual tournament, according to Wing On Corp. president Richard K. Lai. Wing On, better known as Shirley’s Coffee Shop, first started hosting the tournament because, much like GHRA, the company wanted to do something for its employees.

“We figured that creating a basketball league would be one of the healthiest ways for employees to bond with each other,” Lai says. “And we called it the Shirley’s Invitational — with the emphasis on ‘invitational’— because we didn’t want any players that played on any national teams or in the really highlevel leagues, where teams like National Office Supply, Ace Hardware and the Andersen Bombers were playing. This league was meant to be more for the amateurs, we wanted it to be more casual and fun, so we invited a lot of different companies to join.” 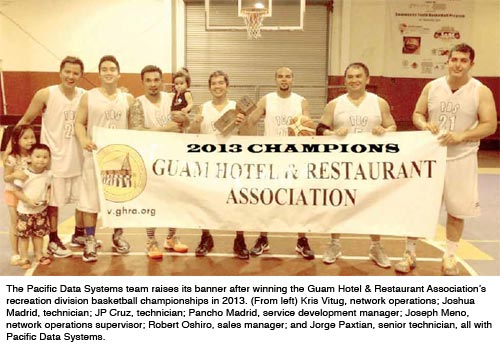 The league, now grown from its original six teams to a full roster of 20, runs for about three months out of the year.

“We say 20, but in reality, it’s much more than that,” Lai says. “We wanted to stop at 20 to keep it manageable, but there are a lot of companies that want to join this league. There’s a waiting list now.”

Lai adds that the league runs once a year, but they try to fit in two leagues if they can because of the high demand. However, he admits that it’s not easy to do because, like GHRA, the league uses the Tamuning Gym to host its games because of its central location to all the businesses involved. 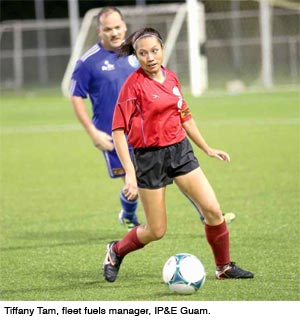 As one of the island’s largest sports organizations, the Guam Football Association — also presided over by Lai, who has been the association’s president for the past 13 years — is another great outlet for companies looking to provide their employees with a fun and competitive environment. Several companies on island sponsor men’s and women’s teams at the highest levels of play, populated by a combination of skilled employees, high-level players and current and former members of the Guam national football teams.

Jill Espiritu, media and marketing officer for the association, says, “The companies that come to mind when I think of soccer teams are Quality Distributors, PaintCo, Guam Shipyard and Doosan. Those companies field teams in the men’s, women’s and youth divisions.”

However, there are also more casual leagues available for those who are less practiced at the sport. And what some might be surprised to learn is how many of the island’s executives enjoy a little time on the pitch themselves, usually as part of the Guam Football Association’s Bud Light Co-Ed Masters Soccer League.

A slightly more casual league intended for male players aged above 40 and female players aged above 25, the Co- Ed Masters League is a place for bosses and employees from a variety of different companies to interact on the field. In fact, last year’s league champion team, Rovers FC, was driven to victory in its final game by the twin engines of Richard Hawes, proprietor of Gemkell, and Ian Lawton, director of safety and security for Hyatt Regency Guam. 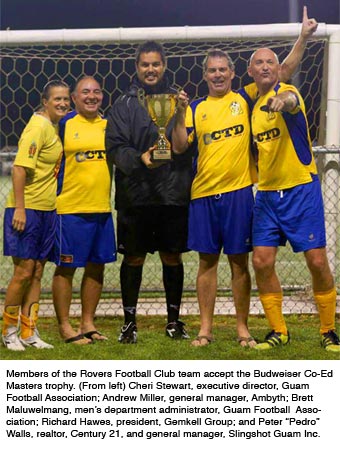 Football and the Lai name have practically gone hand-in-hand on Guam for years. So it’s no surprise that one of the most prolific contributors to the Guam Football Association, both in terms of sponsorship and participation, is Richard Lai’s older brother, treasurer for the association, and fellow football aficionado, George Lai. As the president of Quality Distributors, George Lai fields and sponsors nine teams in the association, and the company has taken the Men’s Cup championship six times in the past eight years.

“I learned how to be successful in business because of sports, especially soccer,” he says. “Everything about running a good business involves teamwork, and I truly believe that a good company doesn’t just do good business, but also gets involved in the community. For me and my guys, there’s a sense of pride knowing that after work, instead of just going home, they go play basketball or tennis or soccer. Especially if there’s a team element involved, it’s better for morale, and it generates a lot of team spirit. So it’s important when you’re running a business, to give back, and there’s no better way to give back than to improve the community and the sports that made this possible.”

In addition to its success in the Guam Football Association, Quality has a team in every sports league of the GHRA. “Whenever an employee comes up and says, ‘Boss, we’d like to put together a team,’ I say, ‘Sure, let’s do it,'” George Lai says. “I’m very supportive of that kind of development because it’s good for the employees, and it gives them a sense of family when they go out there and play together after work. It’s great stuff.”

No Responses to “Take it to the turf: Guam companies build camaraderie and morale ‘out in the field’”