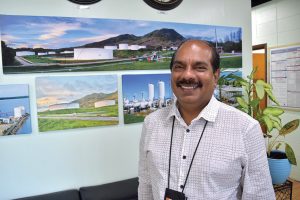 Kazhakuttam Kunjuramn “K.K.” Vikraman manages a company that provides a particular service not many people know about, but is very useful to the islands of Micronesia.

As general manager of Tristar Terminals Guam Inc., an Agility company, Vikraman oversees the largest storage facility in Micronesia. On approximately 250 acres of secluded land in Agat, the company maintains and rents out 26 tanks that can hold a total of 4.2 million gallons of fuel products.

Vikraman calls this service “terminaling,” which is a shortened form of the company’s official profile as a liquid logistics solutions provider. Tristar Guam has major clients including the Port Authority of Guam, Guam Power Authority, the Department of Defense and private oil distribution companies.

Tristar is similar to a real estate transaction in which a client would rent out a tank and must continue paying to use that tank. However, Vikraman says the company goes a step further and ensures protection on the product the client is storing in the tank.

“When the product comes to us, we are accountable for the quality and quantity of the product,” he says. If the product is jeopardized by a reduction in quality or quantity, Tristar would have to repay the renter an equivalent amount.

Since he became the general manager in June 2010, Vikraman has worked to keep those tanks in proper form. The tanks have been on the lot since the 1960s, when the Guam Oil Refinery Co. operated there. The refinery shut down and changed hands with Shell in the 1990s. By the end of 2009, Tristar took ownership of the property.

“This terminal when we bought it was like a rust bucket,” Vikraman says.

The company spent almost $40 million to renovate the tanks and bring it up to industry standards, which garnered attention from Tank Storage Magazine. Vikraman in March was recognized with the Outstanding Achievement Award at the 2018 Global Tank Storage Awards in Rotterdam for his work.

At 58 years old, Vikraman has decades of experience in the mechanical and oil-based industry. He graduated in 1982 from a four-year mechanical engineering program in Trivandrum and began his career the following year. He worked 10 years in India and 15 years in Dubai before moving to Guam in 2009, initially as a consultant for Tristar. Six months later, he was tapped to be the general manager.

Large amounts of oil, especially on islands like Guam, may draw concern for fear of pollution or contamination, but Vikraman says he ensures that the company produces the opposite effect.

The secluded location of Tristar, which is also gated and guarded, allows ample time for control and cleanup should there ever be a leaking tank. The chances of that happening are nearly non-existent, however, because there is a contingency built beneath each tank. There are also berms around the perimeter that would keep the product from seeping out to any water source. The space is so secure that three streams flow through the property with no negative effect, Vikraman says.

“We also got an appreciation letter from Region 9 of the [The Environmental Protection Agency]” for not harming the habitat of an endangered species in the nearby wetlands,” he says.