From Taiwan to trusts 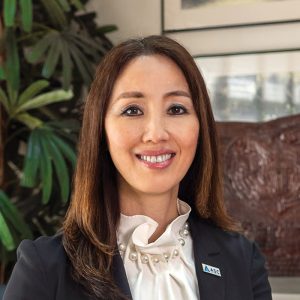 Just as her self-proclaimed “10-year-itch” with positions came to pass in January, when, by her own account is when she is usually ready to move to another company, Candy C. Okuhama received her promotion and title-change from director of sales and marketing to president of ASC Trust LLC.

Okuhama stepped into the presidency as the pandemic hit.

“During COVID-19 — what a time it is to rise up to this position and then come into the challenges that are not in any book or case study,” Okuhama says.

But Okuhama may have found her niche.

“I actually really enjoy this job and really enjoy the people that I work with. This is a very dynamic organization, and I’m going to practice what I preach, and retire with ASC,” when that time comes, she says.

While the change in title and responsibility hasn’t been too tough on her, Okuhama says she still misses her roots.

“The sales functions are what I love to do — that’s where my passion is,” she says. “But these days, I’m in the office a lot more… but I will always be a salesperson.”

She does say she enjoys the new opportunities and challenges that come with being president.

“I have perfected sales,” she says. “So, now I am able to continue to learn every department’s different processes, learn the mechanics and dive deep into all that it involves to make a plan successful.”

Okuhama first journeyed to the island in 1979, when her family immigrated to Guam from Taiwan. She says that as a young child, it was difficult to adjust.

“I didn’t speak a word of English. I would cry every day when I would go to school, because I didn’t understand. The hardest part was not being able to comprehend what others were saying and not being able to get my ideas across.

“I was basically forced into learning English because no one else spoke Chinese. It took me a good two to three years for me to really have a conversation.”

She is fluent in Mandarin Chinese as well as being conversant in Japanese.

Okuhama says her affinity for sales came from nearly 18 years of helping with her family business, which started as a garment factory and transitioned to a retail store. Her father opened the factory shortly after moving to Guam.

As a graduate of the University of Guam majoring in business administration, she moved from the family business to become sales manager for DeWitt Moving and Storage, holding that job for nearly eight years before joining ASC.

Despite a pre-pandemic agenda that saw her also traveling off-island to meet with clients, Okuhama is adept at planning.

“Balancing my schedule is actually one of my strengths,” she says. “When you’re taking charge of a company, you have to be able to take things as they come. My calendar is what I rely on.”

At the end of the day, Okuhama says she relaxes through cooking and yoga, as well as traveling for leisure, even though that has not happened recently.