Focused on the future 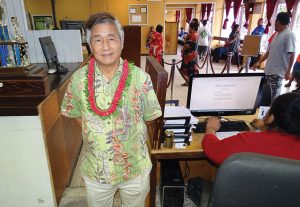 The astronomical rise in the sales value of shares in the Bank of Marshall Islands tells the story of President and CEO Patrick Chen’s 37 years at the helm of the financial institution. When the bank first began selling shares in the 1980s, one share cost $10. Today, the buying price is $310.

Chen has overseen significant expansion of bank services and the establishment of sister companies under the umbrella corporation Marshall Islands Holdings Inc., which has moved into marketing local produce and crafts, commercial fishing and related business initiatives.

Chen gained a certificate in banking from Taichung Commercial College in Taiwan, then went to Tamkang University to get his bachelor’s in business, majoring in international trade. After graduation, he first worked for the Chang Hwa Bank and then the Taipei branch of Chase Manhattan, getting six years of experience in a variety of bank operations. Then he moved to the department store complex known as “Lai Lai,” which combined grocery, men’s, women’s and children’s clothing, cosmetics, household goods, restaurants and a range of other retail outlets in a multi-story facility. “I was a floor manager for three years,” he says. “This is where I learned retail and customer service.”

The first thing that happened on his arrival in Majuro in 1982 was changing the bank’s name to the Bank of Marshall Islands. “The reputation of the bank was no good because it went bankrupt,” he said. “I had to make sure it was successful. I treated it as my own baby. We couldn’t afford another failure.”

Chen said the main challenge was the lack of capital to finance loans in the early years of BOMI. New ownership had seeded the bank with only $500,000. It wasn’t much to work with. “People think because you’re a bank, people bring you money,” Chen says. “No. Here, few people had savings accounts. They depended on loans. But we didn’t have enough capital to give out loans.”

As the 1980s rolled along, the country’s founding father President Amata Kabua bought personal shares in the bank and then had his government invest by buying out the Taiwanese ownership share, signaling that the bank now lived up to its name. The government, in turn, passed its shares in the bank to the Marshall Islands Social Security Administration to clear the government’s tax debt. The retirement fund put up a million dollars in further investment, and by the early 1990s, the bank took off.

From a start with $500,000, the bank today has capital amounting to $30 million, Chen says. It is the major lender in the country and has branches at Amata Kabua International Airport in Majuro, Ebeye Island, the U.S. Army base at Kwajalein, and on the remote outer atolls of Jaluit and Wotje.

As the bank prospered in the late 1990s and early 2000s, Chen looked for new investment opportunities. But banking laws are strict, prohibiting the bank from investments and retail operations. This motivated establishment of the holding company Marshall Islands Holdings Inc. Under MIHI, the Marshall Islands Service Corp. was established as a small loan operation. Then the Ralik Ratak Fishing Co. was set up to start commercial fishing. Most recently, the Misco Market was set up and has become a retail hub for local marine and agriculture products.

Chen is acting on the synergy created by having a commercial fishing vessel and a market operation to pursue economic opportunities for outer islanders wanting to export fish to Majuro and Ebeye — and possibly international markets. “The reason we’re developing our own fishing business is for poverty reduction, food security and income generation on the outer islands,” he said. “We have a vessel and can help with export opportunities.”

He also thinks there is untapped opportunity for American businesses using Marshall Islands links. “The U.S. doesn’t know we can help them,” he said. “We’re in the middle of the Pacific and can help with exporting U.S. products into the South Pacific. We use the U.S. dollar and the bank provides letters of credit.” It is usually the islands asking Washington for help. But Chen says, “We can help the U.S. by opening up export markets.”

At 71, Chen sees himself staying in the bank CEO role for another two years. After that, he wants to concentrate on Marshall Islands Holdings Inc. and the Misco Market operation. “It’s my dream,” he says, adding, “I became a Marshallese citizen in 1987. I appreciate they granted me citizenship. I need to do something for the Marshall Islands.”

Hobbies: “I love swimming and bottom fishing, either casting or with a hand line.”
Favorite food: Water dumplings and fish balls “which I make myself.”