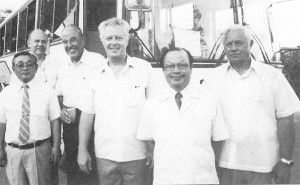 When Robert H. “Bob” Jones first founded Triple J Enterprises Inc. with his wife, Margaret, and sister, Georgia Stafford, in September 1984, he did not know what it would become over the course of the next three decades.

“We didn’t always have it good,” Jones says. “We had to start from the bottom and work our way up.”

Now people look at Triple J and see the empire that Jones and his family have built. Operating in Guam, Saipan, Palau, Marshall Islands, California, North Carolina, Shanghai and Hakuba, Japan, Triple J Enterprises Inc. businesses include auto sales, parts and service, car rental, food wholesale and retail, real estate, property development and restaurant management.  But 30 years before the Triple J Group became the business giant that it is today, Jones was just a man with a kiosk trying to sell some cars.

“We were working out of a little construction booth kiosk as our sales lot and a 40-foot container for our service department,” he says. “That was over on Phil Flores’s lot where the Honda building is now.”

Jones bought the company from his brother, Kenneth, the president of Jones & Guerrero at the time, whom Jones worked under for a year before starting on his own.

Jones says he still remembers those slow, early days struggling to get the financing to populate the first Triple J lot with cars. “We’d go to the bank to borrow the funds, and we were getting skimpy loans in the beginning because we just didn’t have the finances to earn larger ones,” he says.

Jones has fond memories of his children helping him throughout Triple J’s growth, cleaning cars and helping out in the parts and service departments before going on to earn their stripes in managerial positions.

“They were still in high school, but the good thing about the kids doing that is that the employees respected them for it,” he says. “They didn’t start off at the top with a silver spoon in their mouths; they worked alongside the employees and learned what the jobs were like and what to expect of their fellow employees by doing the jobs themselves. That’s what it takes to run a good business.”

Now, 30 years later, a new generation of Jones children stands poised to retread their parents’ paths through the trenches. And Bob’s sons, Jeffrey B. Jones and Jay B. Jones — both equipped with years of experience in both business and car washing, serve as Triple J’s president and executive vice president working alongside their father to strengthen and maintain the family legacy that began on that empty lot all those years ago. n