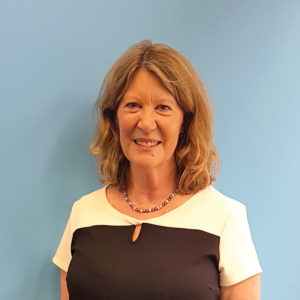 Kevyn Myers, executive vice president, chief operating officer and president of mergers and acquisitions and payment systems at Pentagon Federal Credit Union, is a long way from speech pathology, the field in which she earned a degree from Michigan State University.

“It was just the time,” she says. “There weren’t a lot of speech pathology jobs and I was married to a guy in the State Department, so I moved to Washington D.C. and ended up working at a credit union. I enjoyed my job, one thing led to another and I just continued. It’s been a good run.”

Thanks to her choice of career, Myers didn’t just form a long-lasting relationship with PenFed in 1984, but with Guam as well. When PenFed took over Andersen Air Force Base Federal Credit Union in 1985, they needed people to set up the branch.

“I came in 1986 with the intention of only staying for a short time — I thought I’d only be here for a month,” she says. “I ended up staying here for nine months and I absolutely fell in love with the island. I learned to scuba dive while I was learning to set up the branch.”

Although Myers enjoyed the island’s slow pace, there were challenges to living on the island at the time.

“Back then of course there was no internet and phone calls were really expensive,” she says. But an upside of the communications technology of the time was that she had to visit Guam more often.

“We would come three times a year to connect with people. Now of course, especially with the internet, we don’t have to visit as often, unfortunately.”

When the first PenFed branch on Guam opened in a small office in Building 21000 on Andersen AFB, it wasn’t well-known on-island. Myers says they spent a lot of time meeting with car dealerships to establish relationships with them as well as with the people of Guam. PenFed was worth, over all, just over $500 million in assets. Now, it’s one of the biggest lenders of auto loans and mortgages on the island and overall is worth just under $24 billion.

PenFed’s growth on-island was also made apparent when it opened a second branch in Hagåtña.

PenFed met this demand when it opened the 88,000-square-foot Hagåtña branch in the Guam Capital Investment Corp. building in January 2016. The branch features concepts such as interactive cash recycler kiosks, digital signage and onsite ATM services. Myers said she is excited about the new branch and is appreciative of the loyalty of the local customer base.

“It’s been fun over the years to come back and visit and see how much the credit union has grown on the island,” Myers says. “It’s a huge difference. The growth has been astounding.”

Myers seeks to develop her own people, and says it’s one of the most rewarding aspects of her job. Although the most important people in PenFed are their members, she says it’s important to support and train their staff and give them opportunities to grow and get promoted if they show potential.

As busy as she is thanks to her many responsibilities with PenFed, Myers still makes time to cook, go for walks, spend time with her family and travel. She says that in both her professional and personal life, the most important thing has been maintaining a positive attitude.

“I’m a very positive person,” she says. “I think that’s been my guiding principle, to see the glass half-full rather than half-empty. I think that’s helped me out a lot.” 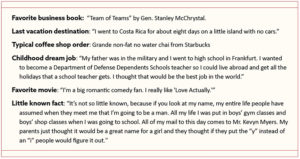