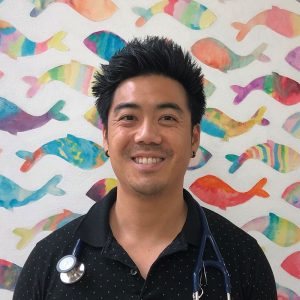 “They are both vulnerable parts of the population,” says Um. He chose pediatrics because he felt that he would be making a bigger difference in the field.

Um works at Guam Memorial Hospital as a pediatric hospitalist, as well as owns and operates a One Love Pediatrics, a pediatrics clinic. He first arrived on Guam in 2016 because of his wife, Amanda, who is also a pediatrician. She works at American Medical Center. Um had joked that someday he would be a doctor on a tropical island like Hawaii.

Additionally, Um has extended family members who are also in the medical field.

However, Um says some people have misconceptions about doctors. “Working at a clinic is not like Grey’s Anatomy. It’s not House,” he says. Sometimes, people will even say that Um does not “look like a doctor,” which he finds amusing. He does not think that doctors should be stereotyped based on things like TV shows.

Um also says in comparison to the U.S., the physician-patient relationship on the island is much different. “One of the big things I see here that I don’t see stateside is how nice the families are, and how grateful they are. People say thank you after a visit here. That didn’t really happen back in California,” says Um. He credited the close-knit nature of the community for the friendlier atmosphere on Guam.

In regard to running a clinic, Um says he enjoys the sense of control and being able to work for himself.

He learned how to operate the clinic as he went along; attending medical school did not prepare him for the unique set of challenges he encounters each day. “I’m always looking for ways to communicate to the patient’s families where they look at me like, ‘Oh, yeah, I get it’ and that makes sense to them,” Um says.

Um also says that being a pediatrician is the best job, and the kids crack him up every day with what they say and do.

Because the medical field is changing each day, Um says he reads and does research on his own to remain up-to-date, which includes reading medical journals. He is also on the Guam Memorial Hospital’s board of trustees and the vice president of the Guam Korean Chamber of Commerce.