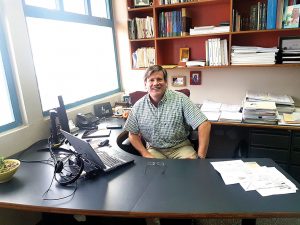 Brent Wiese, managing principal and executive vice president of RIM Architects, didn’t really know what he wanted to do for a living as a teenager.

“I liked computer programming,” he says. “But to do that you have to think in that language and I started to have a hard time talking to people, so I didn’t like that.”

After exploring journalism and psychology, he found architecture.

“With architecture I get to do everything,” he says. “I work with a computer every day, I do a lot of writing for reports and as far as psychology, you’re taking into account how a space affects people. You have to know their cultural background and understand what makes people do the things they do.”

Born and raised in Southern California, architecture brought Wiese to Guam in 1995. That and the urging of a friend.

“I had a friend who was already working here,” Wiese says. “He told me ‘I know you’ll be happier here — San Luis Obispo [in California] is beautiful, but this place is more your style.’”

Wiese arrived on Guam and began working with Herrera, Nelson and Cash, which rebranded as RIM Architects in the late 1990s. He spent some time back in San Luis Obispo, working for Pults & Associates — the company he worked for before Guam — in 2001 before returning to Guam for good in 2009. Since he has worked his way up at RIM Architects from architect to principal in December 2010 and then managing principal in September 2015.

“I like Guam,” he says. “It goes back to the culture. There’s a strong sense of family and neighborhood. I made some friends here who basically invited me into their family and to me that was really special and really cool.”

One of his favorite things about working on Guam is the variety of projects he gets to undertake. He has worked on projects ranging from elementary schools to tank farms to prisons.

“It’s a small island so you pretty much do everything,” he says. “I really get to experience and get into all these different building types — medical, retail, residential — so it doesn’t get boring.”

His most rewarding project was Inarajan Elementary School. At the time, the students were sharing Inarajan Middle School, taking many of their classes in trailers. Wiese says they were able to complete the project significantly under budget.

“I got to be there when they brought the kids to tour the school,” he says. “To watch them look into their classrooms — they were like, ‘Is this my classroom?’ — and they were crying. It was beautiful and amazing. To have that much of an impact on somebody, that was probably the most rewarding experience ever.”

When he’s not working, Wiese can be found following his beloved Los Angeles Dodgers and Oakland Raiders or hiking, which he tries to do every Sunday if he’s not busy.

“There’s a lot of open space on Guam, which is really nice,” he says. “I like the southern area — we call it ‘God’s country’ — it’s just beautiful down there.”