Rubyjane Buhain-Redila’s ambitious and multi-talented nature is reflected in her accomplishments as a filmmaker, artist and writer. But among these passions, she also owns and operates a small business.

Pursuing business was instilled in her as a young girl as she observed her hard-working parents run a food truck business outside of the Northern Region Community Health Center. She and her husband, Mark Redila, followed suit as owners of John B’s Mart located in Dededo and as of late last year, Tamuning as well. They had taken full ownership of the store after her father, after whom the store is named, retired from operating it in 2012. The store specializes in Filipino products that are usually difficult to find in Guam including fresh seafood, pastries, traditional and homemade products, as well a variety of beauty products. It also carries local produce and locally made and U.S.-made products.

She tries to cater to her customers’ specific requests. “It’s called the ‘kababayan approach,’” she says, “which means that every single person that walks in our door is our neighbor.”

After saving up in 2012, Buhain-Redila acquired another small business, the local coffee shop Java Hut in Tamuning.

“It was always my dream to open up a coffee shop,” Buhain-Redila says. “So when I saw that it was for sale, I immediately jumped on it.”

Although she was doubtful about investing in a failing business, she saw the potential and was driven to turn it around. “It was the biggest gamble I made in my entire life,” she says. “I was able to turn it around in three months.”

Through Java Hut, she built valuable networks, got involved in community projects including the Guam Cancer Care’s Pink Ball, engaged the community through open mic nights and even adopted a red toy poodle named Ziggy from a customer.

Earlier this year, Buhain-Redila decided to sell the business to focus more on her creative endeavors and family.

“My goal was to renovate, turn it around into a viable coffee shop, engage the community and then sell it,” she says. She was successful in doing so as she sold it at its peak. “It was hard to let it go. The staff there are like my separate family,” she says.

In addition to Java Hut and John B’s Mart, Buhain-Redila also had operated a daycare and restaurant in 2011. Having to close those businesses prepared her to be more cautious in her future business decisions. “I learned from that experience for my business day to day and for my business goals,” she says. “I apply more due diligence in every aspect of my life.”

Upon selling Java Hut, Buhain-Redila is delving immensely into her art. She produced the on-island performance of “Miss Saigon” and also wrote, produced and acted in her fictional film, “Madam.” The film was screened at the UOG Film Festival and was nominated for Best Made in Marianas. She is now writing her first screenplay, “Cadence,” which she will be directing and shooting by the end of July. For Buhain-Redila, she doesn’t consider her filmmaking a business but rather, a passion.

“It’s not the profit you make, it’s how happy you feel,” she says. “When I create something, I’m happiest. When I have that fire, I just can’t stop. It’s rewarding despite the stress.”

At the end of the day, all of Buhain-Redila’s ambitious pursuits are second to her two children. “All of that is temporary,” she says. “I would want my legacy to be impactful on my kids more than anything else. They’re my primary goal and inspiration, my number one motivation.” 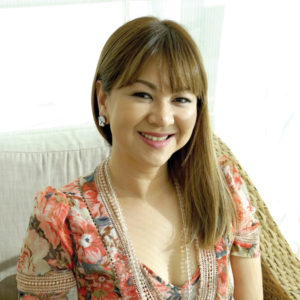