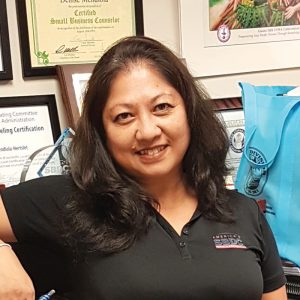 “They’re not the type of people who will sit there and do your numbers every day,” she says. “I’m like that. I love to help people create ideas and work through their numbers to see if it makes sense, but once I’ve helped them do that, I want to move on to the next thing. So this is a lot of fun because no day is the same. I’m not ready to settle down with one business yet.”

As network director, Mendiola is charged with managing the fiscal and programmatic responsibilities of the Pacific Island SBDC network. By making sure everybody is following the mission and vision of the network, the organization aims to support the economic development of the western Pacific Islands by providing confidential, one-to-one advisement and training to people who want to either start a new business or expand an existing one.

It’s perhaps fitting that Mendiola started her relationship with the SBDC as a client. “I was making a lot of mistakes, so these counselors here — they were called counselors at the time — they reached out to me and they wanted to make sure I was doing the right thing,” she says. “I started coming here for services and I really enjoyed being a client, so I spent a lot of time here.”

An early growing pain in her business education involved a marketing company based on concepts from the book “Guerrilla Marketing,” which was originally published in 1983 and has seen several editions since. The problem wasn’t that she was using the concepts — the problem was that she was also using the name.

“That’s why I got called in by SBDC, because it’s a trademarked name and they said, ‘Hey, you can’t do that,’ and I told them ‘I didn’t know that.’ I got slapped on the wrist and I changed the name and things turned out good. That’s the idea behind the SBDC, to be the guide and to be the other set of eyes to help small businesses start, survive and then succeed. That’s what we’re here for” she said.

Along with her responsibilities with the SBDC, Mendiola also keeps busy with volunteer work in the community. Mendiola is past president and current president elect for Soroptimist International of the Marianas, past president for the Guam Council of Women’s Clubs, secretary for the Rigalu Foundation, a charter member of the Guam Women’s Chamber of Commerce and charter president for the Parent Teacher Association of Tiyan High.

One of Mendiola’s proudest moments in that area is helping to found the Guam Women’s Chamber of Commerce, which is celebrating its fifth anniversary this year. Mendiola was among nine women who created the Women’s Chamber, which started with 20 members in 2013 and now numbers about 200.

Born and raised on Guam, Mendiola is also conscious of the importance of both developing Pacific island economies and also preserving and integrating their indigenous cultures into a modern context.

“There’s a lot of work that needs to be done in our community regarding this mix between Westernization and Pacific Islander cultural values,” she says. “We’re trying to find that mix, the best balance, and it’s a challenge because a lot of times it seems like there’s no real perfect balance between the two. You kind of have to pick and choose what you believe in and what you think your core values are going to be as a business owner.”

To address this, the SBDC is working on a model called the Indigenous Business Model, the aim of which is to gather and publish data and analysis that allows people from different islands to create businesses that are both successful and aligned with their culture.

“We’re looking at all of our islands in Micronesia because everybody’s going to be different,” she says. “We want to create a guide that helps you as a Pacific Islander run a business that it works with your cultural values so you don’t have to compromise anything.”

During her time off, Mendiola enjoys hiking with her daughters and reading fiction.

“I love Harry Potter. I’ve even got a wand, but I don’t bring it work because it’s too precious.”

Ultimately, whether volunteering or at work, Mendiola’s passion is helping people, which she says makes her position at the SBDC a perfect fit.