The construction industry on Guam is busier than ever, and while there are concerns that the supply may not meet the demand, local contractors agree that the industry is making positive strides.

Much of the attention the industry gets is from the island’s problem with temporary skilled foreign labor. At a time when the Marine relocation projects are beginning to pick up, H-2B visa workers are needed to supplement Guam’s local workforce, which is not enough to fulfill all the public, private and federal projects. As a result, construction is taking longer and is costing more.

While the military buildup projects continue, the public and private sectors also must keep up with the increasing infrastructure and population. A new power plant, upgraded water and wastewater systems, expanded and improved roads and a more equipped port are some of the major projects that the government of Guam is working on to greet the buildup. Private investors are building and renovating residential and commercial developments to accommodate the incoming Marines and their families.

For the next five years, construction contractors have their work cut out for them.

Need for more workers
The attention to Guam’s labor situation has brought some relief, however. The National Defense Authorization Act of 2018 allows up to 4,000 foreign labor visas for buildup-related projects, and so far some 300 workers have been hired.

Still, one issue contractors seem to agree on is the gap in skilled labor. While they admit the local pool has grown significantly over the past decade, there is still a shortage because the demand has also grown. 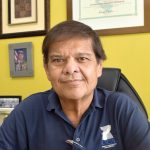 James A. Martinez, president of the Guam Contractors Association, says there may be as many as 6,000 local workers today. Foreign labor workers have always taken a supplementary role in the industry, and before the H-2B visa situation occurred, Martinez says there had been a steady employ of around 1,500 foreign workers each year. The association has about 520 members, he says.

“We often get criticized that the construction industry always hires foreign workers. It’s actually almost double the cost to hire a foreign worker as opposed to a local worker,” Martinez says, citing additional cost such as transportation, lodging and visa fees.

The amount to hire foreign labor increased this year. In May, Bill No. 250-34 introduced by Sen. Régine Biscoe Lee and enacted as law increased the registration fee for foreign labor by $1,000 in an effort to bring more funding into programs that build the local workforce. The increased fee applies to H-2B visa workers who are hired for buildup construction projects.

“It makes sense to hire local, but we don’t have enough people in the local market who are interested,” Martinez says.

Now more than ever, it’s crucial to continue to bolster the local workforce because construction is starting to peak, Martinez says. Guam will start to see peak activity around 2020, he says. 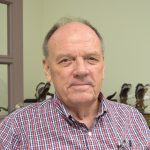 William D. Beery, partial owner and general manager of Tutujan Hill Group, agrees that the local workforce has significantly increased. At the time the company started in 2010, Beery noted there were about 2,200 local workers. That amount has since doubled and is continuing to grow, he says.

Keith J. Stewart, president of Pacific Rim Construction, also agrees that there needs to be a boon in skilled local labor — especially since his business only employs locally.

Because of this decision, PacRim’s projects aren’t directly affected by the H-2B visa problems. It’s not to say there hasn’t been any impact, however; buildup projects tend to take priority with the local workforce, so PacRim is left to make due with the workers it has.

“There’s a tremendous amount of talent here, but still a shortage of workers,” Stewart says.

Even with the authorized 4,000 H-2B workers permitted to work on Guam buildup projects, Martinez warns that contractors can’t rely on that.

“The 4,000 cap was designated by the Defense Act for 2018, but that could change next year,” Martinez says.

Construction an alternative to college, military 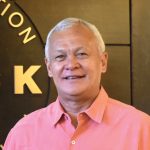 “The reality is that there’s got to be a continual education process for those students who do not aspire to go to college and want to take up a vocational trade,” he says.

It’s difficult to generate that interest if it’s not exposed to students before they leave high school, Kaae says. He observes this in the employees he manages. Black Construction has an “aged workforce,” he says, with a small percentage of employees below the age of 40. Creating a high school program that helps promote construction as a sustainable career would be instrumental in bolstering the local workforce. 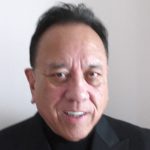 Agbayani Construction Corp. President and CEO Vincent D. Agbayani has a similar thought to this.

“I would like to see younger people going into a trade instead of going into the military,” he says. “It’s an adaptable skill. Once someone teaches you a trade, the knowledge doesn’t really ever go away.”

In order for construction to be a viable alternative, there has to be a sense of security. Stewart says wages would need to be more enticing.

“In my opinion, part of what’s holding back the local workforce is the low labor rates. Higher labor rates would have a positive impact on the construction industry by attracting more talent,” Stewart says.

The contractors observed that wages have been climbing because of the labor shortage. According to Martinez, the average hourly wage of a construction worker with at least two years of training and experience can range from $14 to $19, while a journeyman with four years under his belt can reach a wage as high as $40 an hour. 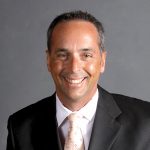 “When we were dry on workforce, we saw construction costs go up — about a 20% to 25% increase — because of the labor shortage,” Martinez says.

The GCA Trades Academy has been helpful in training workers and connecting them with local contractors for apprenticeships. Those enrolled in the academy can gain up to 8,000 hours — equivalent to four years — of hands-on experience with a contractor.

The academy sees just fewer than 200 people enroll per cycle, but the workers’ interests are mainly with electrical and heating, ventilation and air condition work, Martinez says. Not many people train under the more needed specialties such as carpentry and masonry. He suspects it’s because the latter two specialties are labor intensive, whereas electrical and HVAC are mainly indoors.

The Guam Community College offers certificate programs geared towards construction and has often partnered with contractors and GCA to promote the labor workforce. From July 2 to Aug. 10, GCC hosted the Future Builders of Guam Construction Boot Camp, which trained people in carpentry, welding, electrical, masonry and plumbing.

There are numerous opportunities for aspiring tradesmen to grow. Planting that seed for aspiration is what the industry needs to work on, Kaae says, and it has to begin in school. 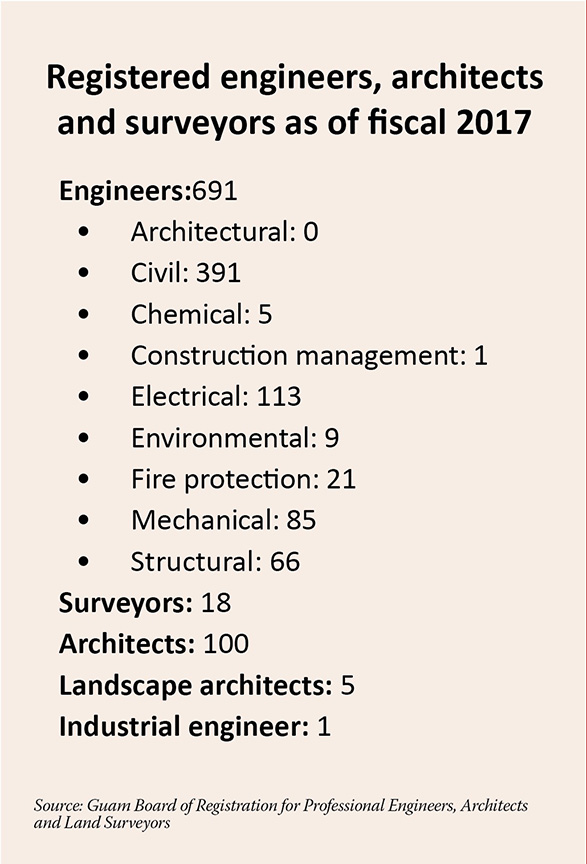 Among contractors, the labor shortage seems to be the main factor behind the rising cost of construction.

There hasn’t been a dramatic increase in construction cost yet, Beery says. The cost of labor has increased, but prices for materials and equipment are still reasonable. Kaae says the cost isn’t terrible, but he anticipates a continual rise in costs because of the price increases of commodities such as fuel and utilities.

“Besides the labor market, financing is always an issue, especially from outside the fence.  More people gravitate toward working on base because it’s more reliable and sturdy,” Beery says.

This statement rings true for Agbayani. The construction contractor would only bid for federal contracts on Guam. The lack of labor made it difficult for Agbayani to do multiple pprojects on the island.

Agbayani Construction is headquartered in San Francisco, but Agbayani also conducts a subsidiary business on Guam called ACC Air, which primarily is an HVAC contractor. The business is picking up well with a diverse set of clients, he says, and he plans to build on this specialty, in addition to a housing maintenance contract with Andersen Air Force Base.

“Construction is not a perfect industry, and it never really comes out the way people expect. Because of this, customers and contractors must work together to find a win-win solution,”
he says.

Contractors say local contractors mostly, if not always, do small- to mid-scale projects on Guam, while the bigger projects like the military buildup attract bigger, off-island contractors.

As the biggest contractor on island, Kaae says off-island investors when bidding on large-scale projects often outnumber Black. He says this is not surprising though, and is actually a common experience.

Larger military projects will draw the attention of bigger off-island contractors. In their case, the smart thing to do would be to partner with one of the local businesses here so they’ll have a better understanding of the local procurement and operational standards, Beery says.

“The key ingredient to surviving in construction is being able to estimate work. If you can’t estimate, something bad will happen, whether it’s bidding too high or bidding too low,” Beery says.

Stewart says at this time, it’s necessary to have the larger off-island contractors conduct work on Guam simply because they have the means to carry out the tasks.

However, Stewart suggests implementing a law that requires any off-island contractor to partner with a local one. That way, there will always be some portion of money that will stay on Guam and not leave, he says.

“One reason for our company’s success is because we generally work on mid-scale projects.  In my opinion, we do not need more off-island companies coming in, but work to develop ways for local companies to grow together — since local companies employ local workers and keep their money in the local economy,” Stewart says. 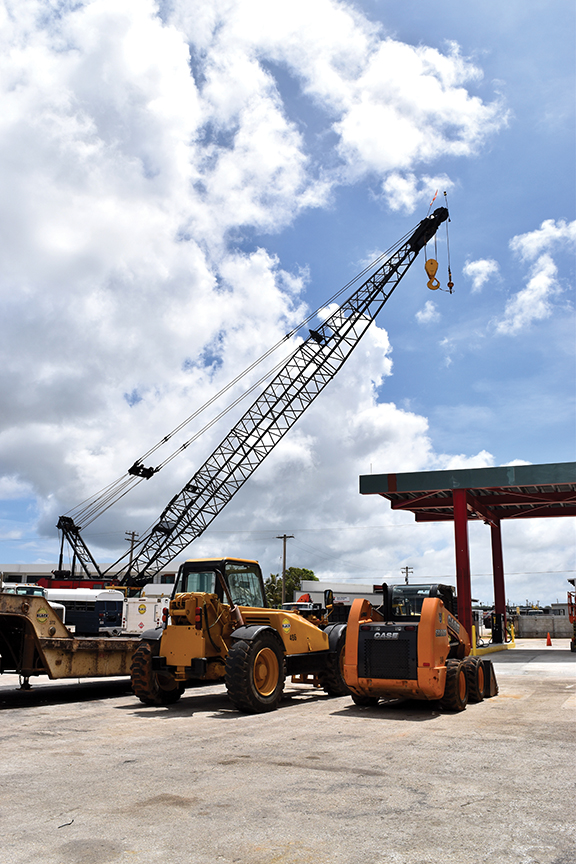 Staying up to date
Beery says Guam’s construction industry may be ahead of everyone else because of the diversity and its unique position as a U.S. entity near Asia. The internet also keeps contractors of aware of the latest gadgets, so it would be difficult to not know about what’s available out there, he says.

“Guam has kept up with the industry trends as a whole when it comes to technical aspects, even with equipment and resources to execute our work,” Kaae says. “We might be behind on the power curve, but for the most part, we’re up there.”

Martinez says he would like to see more advanced technologies that can reduce the risk of harm during labor-intensive work.

Stewart would like to see more specialized suppliers and contractors on Guam — mechanical plumbing, for example — although he admits it would be difficult for those types of companies to thrive on the island because they are not exactly needed all the time.

As for the future of the industry, contractors stressed the need for smarter, more eco-friendly and more cohesive building standards.

“There will come a time when significant renovations are required and infrastructure would have to be upgraded, revised or renewed. We may see those projects 15 or 20 years from now,” Kaae says. “Smart building is really the way of the future.”

As a member of the Guam International Building Code Council, Beery says Guam’s building code is relatively adequate and open to technological advancements. The council is currently working on updating Guam’s code from the 2009 version to the 2018 version of the International Building Code. Despite the nine-year gap, Beery clarified that the updates are minor and Guam’s current building standards are modified to withstand seismic activity or extreme weather conditions.

Stewart says there needs to be a unified approach on how Guam can be marketed to the rest of the world as a unique tourist destination. It starts with master planning.

“How do you create a destination that looks harmonious when there are few design standards or master plans?” Stewart says. “It’s a big gap but also a huge opportunity that Guam can capitalize on.”