Book Review: The development of fishing in the Marshall Islands weaves history within its narrative 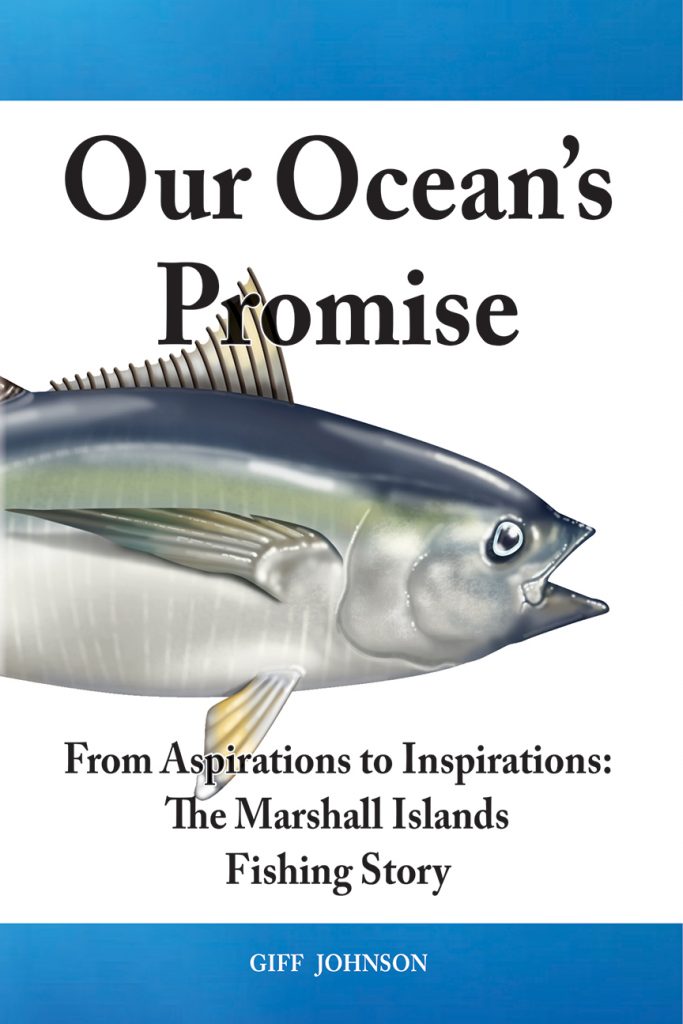 Majuro has developed the world’s busiest tuna transshipment port, with more than 500,000 tons of tuna annually moving from purse seiners to carrier vessels that transport the tuna to canneries. The Marshall Islands Marine Resources Authority — which oversees the industry — contributes millions to the budget of the Marshall Islands government.

However, it would be hard to separate the evolution of fishing in the Marshall Islands from the development of the industry in the Micronesian region, or from the history of the country.

Giff Johnson, author of “Our Ocean’s Promise” wisely offers readers insight and a detailed timeline of both within his book on the development of the industry from subsistence fishing into an essential economic pillar of the Marshalls.

From the 1950s, “Japanese fishing vessels began again venturing East into Micronesia and the Marshall Islands,” Johnson writes. But commercialization would take several more years. In 1961 the Trust Territory of the Pacific launched a commercial fisheries training program in Palau which — in its second training session included students from the Marshalls and the Federated States of Micronesia, as well Palau. As part of U.S. development policy, various companies, including Star Kist and Bumble Bee Tuna Co., began to look at commercial fishing development, with Van Camp Sea Food Co. opening in Palau in 1965.

Johnson shares an interesting story of what happened as s the islands of the Pacific began negotiations on status and sovereignty. “To forestall these nascent rumblings from island leaders about control of their marine zones, the U.S. in the late 1970s floated the idea of making the vast ocean zone encompassed by the Trust Territory Islands part of the United States. That idea didn’t get far.” But in 1979, after the U.S. allowed the Marshalls and the other islands to establish their own maritime authorities, the Marshall Islands Maritime Authority began its work. The same year, the establishment of the Pacific Islands Forum Fisheries Agency gave the industry in Micronesia a group face.

The same year an agreement was negotiated between the Marshall Islands and Japan, which was the beginning of revenue from the industry for the country.

Johnson tackles the industry through the decades as the years bring further investment to the Marshalls — most notably through on-land transshipment, regulation and management of the tuna industry through the Parties to the Nauru Agreement, and enforcement of the illegal, unreported and unregulated fishing, with which the Marshalls conceived a National Action Plan, and partners with the U.S. Coast Guard.

Johnson continues to the present day, chronicling Pacific International Inc.’s net repair yard, and the havoc COVID has wrought on the industry.

Many authorities and industry experts and are featured in the book, together with photos — showing that while fishing may be a sport, fish has also become a food source to be guarded.

Marshall Islands Marine Resources Authority Director Glen Joseph conceived the idea for a book narrating the history of commercial fishing in this central Pacific nation. A partnership with the Pacific Islands Forum Fisheries Agency provided necessary support for the work on the book that was researched and written by Giff Johnson, according to a release about the book.

The book’s quality paper and clear images — to include a map of the region — make its almost 200 pages easy on the eye.

“Our Ocean’s Promise: From Aspirations to Inspirations — The Marshall Islands Fishing Story” is published by Amazon’s Kindle Direct Publishing and available at amazon.com for $26.15.