Banking on a future on Guam

Right after William H. Calori graduated from high school, he arrived on Guam on a one-way ticket from his family and decided to see what living and working on the island might be like. Since then, he has developed an impressive career in banking and finance by diligently working toward whatever task is before him and acknowledging the significance of team effort — all the while keeping his family a top priority. 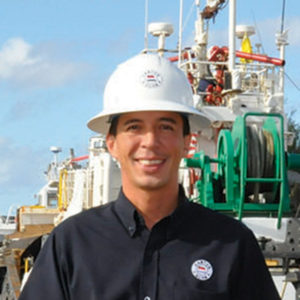 When Calori moved to Guam in 1999, he got his first taste of business as a freelance writer for Guam Business Magazine. Writing helped him make ends meet and, more importantly, piqued his interest in business and entrepreneurship, he says. He decided then to go back to school to study finance.

“That was the catalyst for everything that followed,” he says.

Calori served as student regent on the board of regents at the University of Guam where he met his future boss, Ronald Leach — former chairman of the UOG board of regents and former executive vice president of Bank of Hawaii. Calori says getting to know Leach is just one example of how his education has been an integral part of his career.

“School is what you make of it. It’s wonderful to attend a top college or Ivy League university, but at UOG I was involved in a lot of extracurricular activities and was able to develop a professional network. I’ve always been proud that I attended UOG,” Calori says.

After graduation, Leach encouraged Calori to work for him at Bank of Hawaii. Calori joined the company as a retail sales manager and then moved up one year later to a commercial credit underwriter.

“At the time, I was definitely more interested in investment banking, but then I realized there was very little opportunity on the island for equity finance. [Leach] opened the door to opportunities in debt finance, and that evolved into me becoming a commercial underwriter,” he says.

In the next four years, Calori developed a $380 million commercial loan portfolio — handling risk assessment and loan structuring, among other duties.

“When I first started, they threw me in and just told me to go for it,” he says.

In fiscal 2013, Calori earned the third-highest revenue among First Hawaiian Bank business bankers. He managed a $75 million commercial banking portfolio and developed a clientele of Tier-1 private and government entities, including Cabras Marine Corp. — a provider of pilot, tug, barge, spill response, firefighting and ferry services on Guam and in the Northern Mariana Islands. Calori had known the president of Cabras, Joseph L. Cruz, for a while by that time.

“Joe is my long-time friend and Cabras was part of my banking portfolio. I’ve seen how the company has grown leaps and bounds every year — from barely double digits to almost millions of dollars in revenue per year,” he says.

The growing company began looking to hire someone with a finance background and experience in strategic risk management. That’s when Cabras brought Calori on board in 2016 as the chief financial officer.

Regarding his greatest achievement at Cabras so far, Calori refers to the strength and outstanding performance of his team. He’s proud of what the company has achieved, such as being awarded a five-year contract to perform maintenance and repair of U.S. Navy assets through Military Sealift Command.

When he isn’t working, Calori is spending time with his wife and three children — ages 5, 7 and 9.

“It’s all about family. We’ve made a tradition of going to Talofofo Bay on the weekends and pushing the kids along on the surf board,” he says.

For him, the best part about living and working on Guam is the quality of life and the balance of work and family time he’s able to achieve.

“Being close to family and having a pretty successful career — I don’t think a lot of people get to have that balance. I can still be an active father and involved in my kids’ growing up,” he says.

As for what some people might not know about him, Calori says, “I’m very simple. I’m just working on perfecting my beef brisket.”