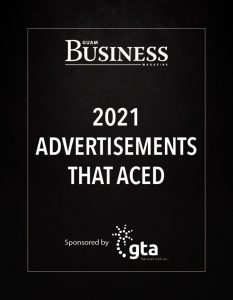 It takes a lot of effort for designers in marketing to determine what concepts, emotions and colors work well to catch the consumer’s eye. For 2021’s advertisements, Guam Business Magazine sought insight from the creators of some of the most engaging ads to grace our publication pages.

Putting customers first, the individuals and teams behind the following ads were aiming to illustrate all the elements that their audience can relate to and empathize with. Here are the ads from 2021 that hit the spot. 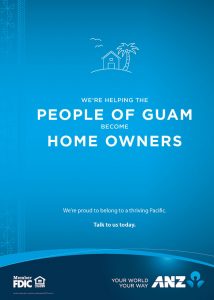 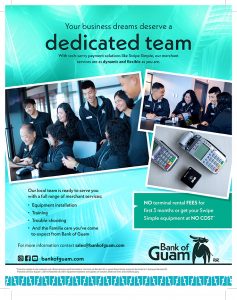 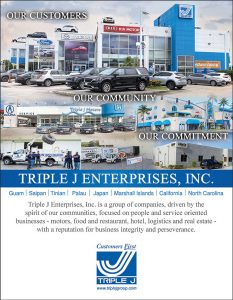 Pedro P. “Sonny” Ada, president and chairman of the Board of Ada’s Trust & Investment Inc. says of the group’s creative work, “Ada’s Trust and Investment ad and marketing concepts and direction are developed in-house, with actual design and layouts contracted out to various ad agencies or independent media consultants.”

The ad that ran had a defined purpose. Ada says, “The ad is a culmination of the various ads we ran in 2020 that were designed to support the call by our government, health, and medical leaders to combat the spread of COVID by staying home, wearing a mask, practice social distancing, frequent washing of hands and by downloading the COVID Alert App. This ad — like all of the others we ran throughout 2020 — was meant for the general public, because the COVID virus had an impact on literally everyone.”

The Ada’s Trust ad uses a sophisticated concept that strong and confident brands with a continuous presence and history can lean into.

Ada says, “The ads within the ad did not market our business product.  It marketed Ada’s Trust and Investment as a company that cares about the community.  A company that has a social conscience.  We also emphasized our company logo incorporating it into the ad messages.”

Ads for Guam-based companies can be particularly meaningful, Ada says.

“In a relatively small community like Guam, the quality and message of ads are very important since a company’s ad not only sells a company’s product or service but is also a reflection of a company.  A company’s logo is an asset no one else can use so there needs to be care in how it’s used.”

Edgar Allan L. Caper is chief marketing officer for KFC, and has worked for the group for eight years, but has more than 20 years of professional experience.

The KFC ad has a defined target — the Guam market, and a straightforward message to appeal to that audience.

“We released this ad at the height of the COVID pandemic. Many restaurants closed and a lot of brands had to pivot. This ad intended to remind our customers that we have been a trusted brand on Guam through the years and that nothing beats our Finger Lickin’ Good chicken,” Caper says.

The continued underlying message was the strong relationship KFC has developed in the island, he says, so that customers can “feel confident getting food from our restaurants — that they can always trust us.”

KFC product images are clearly important. Caper says, there is a philosophy at work here too.

“Marketing is all about a balance between Logic and Magic. Ads should always communicate a clear message to consumers and at the same time should always look enticing, beautiful (not necessarily disruptive) so they can catch the attention of the target audience.”

The credit union’s aim for the ad was to reach a specific group, he says. “Our target audience includes potential home-owners and current home-owners.”

Particularly important in Guam, the content put names to faces with the intent of making a real connection.

“The ad includes a small introduction of our mortgage team,” Mandell says. “We felt that showing our team humanizes the process of buying a home and shows that we are dedicated to understanding the needs of the home buyers and finding solutions for them.”

Showing the team was also designed to put people at ease when discussing what might be the largest investment of their lives, he says.

“We want readers to not feel intimidated to contact us.”

The market in Guam can be competitive, Mandell says.

“There are many quality advertisements out there, so it’s important to be able to stay current and relevant.”

Jeffrey S. De Vera, graphic artist began using his artistic skills early. “I started working in design in high school as a hobby,” he says. He has worked in marketing and design professionally for four years and joined the Citadel Pacific team in Guam a year ago.

De Vera was aiming for instant appeal and understanding of the ad.

“I was trying to portray a message that is easy to understand and straight to the point when you look at it. The message being that it’s easy to redeem rewards for every dollar you spend at Foody’s, Shell, and IT&E when you rack up your points with our PACIFICPOINTS app. The ad also showcases all the great rewards you can redeem, such as United MileagePlus Miles, discounts on accessories and bill rebate vouchers at IT&E, free fuel at Shell and free food at Foody’s,” he says.

The reader response and “call to action” was also built into the ad, De Vera says.

“I wanted the customer or viewer to feel interested when they see this ad. I wanted to ignite the curiosity of a customer or viewer not knowing — or barely knowing — what PACIFICPOINTS is and encourage them to look up what type of rewards program this is, to download our app on the app store to sign up as a member.”

Ads in Guam can have an impact, he says, but the appeal also has to be immediate, he says.

“In this growing age of digital technology, the reach of ads has skyrocketed, even from this tiny island. I believe the quality of advertisements and design is very important because of how fast people see these ads. You want to attract or get a customer’s attention right at first glance.

Design and content can effect change and draw customers, he says.

“For a business, you want to maximize the return of investment on your ad. By providing a quality ad, the business is more likely to gain a better return with the number of people you reach. Creating quality for a purpose is better than creating for no purpose,” De Vera says.

Jessie Q. Rosario is vice president of sales and marketing for both Graphic Center Inc. and its sister company, Island Color & Copy. He has been working in design and marketing for 20 years and been with the group for 25 years, he says.

He also wanted the ad to convey those choices are available, particularly at a difficult time.

The aim therefore was to show, “That we can offer a wide variety of print collaterals for graduation, most especially a COVID graduation, with all its ever-changing protocols”.

The emotional appeal is featured too. Rosario said Island Color & Copy’s message is “That we could still have them be proud and show everyone around them that they are proud of their graduate. We wanted to give them a creative way of reaching everyone during this time of COVID and graduations.”

As to advertising in the Guam market, Rosario says its important that an ad’s message is direct and to the point.

He says, “Be upfront — with no hidden agenda, no guessing. Keep it nice, clean and to the point.

“Being on Guam, we don’t have time for guessing what the ad is trying to tell us.”

Smithbridge has a long history in Guam and the islands, since its entry into the Guam market in 1992. Best says that the company’s marketing outreach is “not only to promote its services, but also to support the needs of the community such as Guam Little League, and PBS Guam as two examples.”

Consistently through its campaigns, Smithbridge emphasizes that it is a “reliable and dependable company to work with.” 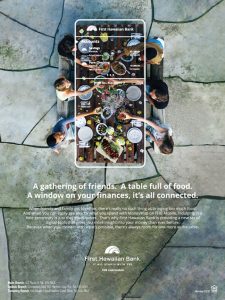 First Hawaiian Bank says its ad was designed to appeal to multiple audiences.

“Our customer relationships take on many different shapes and sizes, which means that our target audience does too. We strive to create messaging that will resonate with a wide variety of individuals — from families to business owners. When someone looks at our advertisement, regardless of their background, we want them to feel like they have the capability to effectively manage their finances through First Hawaiian’s innovative digital platforms.

The ad also recognizes the bank’s standing and relationships in the islands.

“For 163 years, First Hawaiian has been a community bank. Community is what motivated the creation of our institution and the creative behind this advertisement. The bank realizes that connection is at the center of everything we do. We empower our customers with the information they need, in the channels they prefer. Whether it’s a simple mobile deposit, budget management, or paying bills at the click of a button, First Hawaiian’s combination of tailored digital services extend our relationship banking efforts into the digital space,” the bank says.

At the heart of the ad, is the primal message for its audience.

“We wanted readers to take away the message that our bank can connect them to the tools, resources and support needed to effectively manage their finances so they can focus on the connections that really matter in their lives,” First Hawaiian Bank says.

As to the instant readers see the ad and while it conveys meaning, the ad’s attraction needs to be immediate, the bank says.

“It is our goal that the communities we serve, including those in Guam, feel a deeper connection with First Hawaiian. We have a limited window of time to capture the attention of our audience and our goal is to create an advertisement that inspires, reflects the bank’s core values, and exemplifies our efforts to digitally transform the banking experience.”